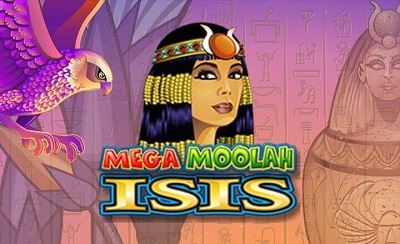 The Mega Moolah Isis progressive slot is an Egyptian-themed tie-in to Microgaming’s largest progressive jackpot network. The top prize is always worth at least €1 million in this game, and it’s jam-packed with other features to give players lots of ways to win tremendous payouts even without the set of four different progressive jackpots.

An Introduction to Mega Moolah Isis

Players from all over the world have come to Microgaming-powered casinos to play games from the Mega Moolah series because of how serious the gameplay and progressive jackpots are.

The Mega Moolah Isis video slot is an entry into the set of games that have these jackpots available, and it may be the most entertaining of the bunch.

Visually, this game has been out for a while, but the graphics still hold up to be reasonably nice even in the modern era. There are stylized letters and numbers for the card rank symbols along with highly detailed symbols for several Egyptian figures.

On the gameplay side, this is a high-action, high-volatility experience that’s all about trying to go big at the expense of all else. This is one of the things that has made it so popular and that has seen it maintain its popularity over the years since it was originally released.

You get controls across the bottom of the reels that make it really easy to pick out exactly what kind of bet size you want for this game. Here’s a summary of what’s available:

Something else we want to point out is that the volatility of this game is particularly high. It’s among the highest that you’ll find of any online slot, so you’ll want to make sure that you adjust your bet sizes and expectations accordingly so that you know exactly what kind of swings that you’ll be dealing with when you play.

One thing that Microgaming did with the Mega Moolah Isis online slot that we think other companies could learn from is that they gave it a ton of depth to its gameplay even outside of the progressives. This gives you plenty to get excited about while you chase down these big jackpots.

Isis is the wild symbol, and she shows up wear a headband with black hair and gold beads. She shows up on every single reel, and she awards the following payouts for winning combinations:

What’s more is that this is a wild multiplier. If you get at least one Isis wild as a part of any regular winning combination, she will double the size of that win. Notice that she substitutes for anything in the game other than the falcon scatters.

The purple falcon symbol is the scatter in this game, and it also shows up on all five reels. It’s responsible for some pretty serious wins that are all multiples of the entire bet size. That includes the following:

These are some pretty solid payouts, and they pay no matter where these scattered falcon symbols land on the reels of the Mega Moolah Isis video slot. While the pays are obviously top-heavy, having wins for as few as two of a kind for the scatters and the wilds actually does limit the volatility to some degree.

Other than having some pretty strong payouts, the falcon scatters are also responsible for triggering a free spins bonus feature. If get three of more of them on the reels, then you will get the following numbers of free turns:

What’s even more is that during this feature, all of your wins will be hit with a 6x multiplier (except for progressives payouts). This includes scatter wins, and that multiplier will also combine with the 2x wild multiplier to give total available multipliers of up to 12x.

The progressive jackpots for this game are listed up above the reels. The mini starts off at €10, the minor at €100, the major at €10,000 and the mega at the €1 million level. They continue to get larger over time until they are won.

You’ll randomly be taken to the progressive jackpot bonus round on any given paid spin. Your chances of winning are proportionate to the size of your bet, so a wager of €5 per spin would have half the chance of winning as a wager of €10 per spin to keep things fair.

A wheel will spin and randomly give you one of the four jackpots. You’re guaranteed a prize when the jackpot wheel appears.

How to Win at Mega Moolah Isis

The thing to understand about this game on the most fundamental level is that the volatility is at an extreme high. That means that you’ll want to adjust by using bets on the lower end of the range that you’re comfortable with, and you can further compensate by playing longer sessions than you typically would.

You need to go into this game with the understanding that you’re probably not going to finish with small wins very often. Instead, the two most likely outcomes are sizable wins are small losses relative to your bet size. That’s just how the game is set up with its volatility as a part of Microgaming’s overall portfolio.

At the upper end of the pay table, you’ve got some pretty big wins with the wilds and scatters. From there, the eye of Ra pays out 2,000x for five, and you can win 1,750x for five of the staff symbol. The golden diamond made of wings gets you 1,500x, and the tomb pays 1,250x for five on a payline. Five of a kind of the flower pays a solid 1,000x.

The Mega Moolah Isis progressive slot is one of the most popular progressive titles that Microgaming has ever produced, and it’s iconic for its in-depth gameplay in spite of the progressive jackpot link.

While there’s no doubting that it’s a bit dated from a visual standpoint, that’s not something that seems to matter much to players because the graphics are definitely not super past their prime, and the visual appeal is secondary to the overwhelmingly strong level of gameplay that this title brings to the table.