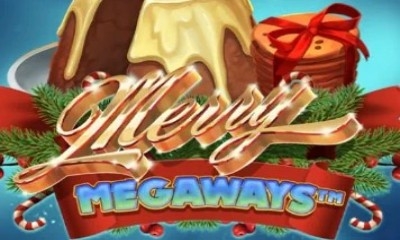 The Merry Megaways online slot takes players into a holiday adventure. Santa Claus looks on as you shoot for a variety of presents. These presents show up in the sizable range of features and the thousands of ways to win thanks to the Megaways format.

An Introduction to the Merry Megaways Slot

Most people love the holiday season and the opportunity to gift presents to those you care for the most. The Santa’s Great Gifts slot captured this idea perfectly. However, you should also take the time to give yourself a great gift. That’s where the Merry Megaways video slot attempts to shine.

A whole lot of features are packed into a larger format than usual with the Megaways approach to wins offering a high hit-rate in the regular game as well.

You’ll immediately know what this game is all about as soon as you set your eyes on it. You’re taken to the North Pole at Santa’s home to play this game. Snowy mountains and snow-covered trees are shown in the background. Additionally, Santa stands off to the side watching on as you go after the gifts that can be found on the reels. The wintery atmosphere is perfect for the holiday theme.

While the presentation is top-notch, the gameplay is extremely strong as well. One reason for this is that the features fit perfectly into the theme of the title. However, another reason is that Iron Dog Studio made the features work with the Megaways layout. Some providers will just throw something together and rely on the Megaways name to carry the slot. That’s not the case at all here. Instead, the game mechanics and features offer a great value with chances for strong wins while simultaneously meshing with the whole idea behind the slot in the first place. The end result is a particularly cohesive and smooth experience.

If you’ve not enjoyed a Megaways themed game before, it can seem like a lot is going on at first. However, in what follows, we’ll show you how it works in an intuitive way. Don’t be intimidated by all of the symbols and how they change in size between spins. When you read over the following breakdown, you’ll have a quick and easy understanding of how everything comes together.

With the Megaways format being used like it is, the hit-rate of this title is fairly high. While high hit-rates usually mean low volatility levels, this game has complicating factors. For example, the feature set packs quite a punch with opportunities for huge wins. That’s an element of the play that pushes the volatility upward a whole lot. However, when you combine these two sides of things, the volatility settles at a medium-high level.

All payouts are multiplied by the entire wager in this game. No complicated math has to be done in your head with coins per line, coin sizes and that sort of thing. We love how easy it is to keep up with how much players stand to win as a result. That’s just one more thing Iron Dog Studio did to make the experience smooth and simple.

Gameplay and Features for the Merry Megaways Video Slot

Some holiday-themed games try to differentiate themselves with spins on or inversions of the usual themes. The Christmas Night game is a strong example of that idea. However, with the Merry Megaways online slot, Iron Dog Studio focused on standing out with tremendous gameplay. As such, you’ll need to learn about a variety of mechanics and features in this game. To help keep things from being overwhelming or confusing, we have a total case-by-case breakdown in the following.

This title features a tumble feature that drives a lot of the gameplay. When a feature happens really often, it becomes a key part of the experience. That’s exactly the contribution that the tumble feature has in this title.

In short, it triggers after all wins. Winning symbols disappear after they have awarded any winnings. Additionally, this allows new symbols to move into place to fill the grid back up. On the regular reels, these symbols fill in from the top down. However, on the horizontal set of extra symbols at the top, they come in from right to left.

From there, you’re given a new chance to hit winning combinations. If you do, then the process happens again and again until no new wins are available.

The present symbol on the green background is the wild symbol in this game. We love this idea since you never really know what you’re going to get inside of a gift like this.

Having a lot of potential locations for a wild in a Megaways style slot is a big deal. That’s because they can substitute inside of so many different winning ways no matter where they land.

However, we want to point out that they do not land on the first reel. Instead, you’ll only find them on the second, third, fourth, fifth and sixth. With that said, since this title can have so many ways to win, we don’t think you’re losing out in any way by not having wild-only winning combinations available.

On the horizontal reel that runs across the top four middle positions, you can land Christmas Cracker symbols. In the Merry Megaways video slot, you can think of this as a special sticky wild that persists across tumbles. However, only one can appear at a time.

If your initial spin does not include any wins, or when you get to the end of your tumbles, the Christmas Cracker mechanic comes alive. It will then explode, which causes a symbol from each reel to also explode. Additionally, two more randomly placed symbols also explode.

From there, new symbols fall down into place just like a tumble feature. This essentially gives a new chance to hit winning combinations.

Santa’s big red sleigh shows up on the second, third, fourth and fifth reels only. When you get four of them on the board at once, you’ll trigger a set of free spins.

During this feature, the Santa’s Sack symbol can appear. Note that it does not appear in the regular game mode. However, when it does show up, between two and four reels are added across the second, third and fourth reels. In some cases, two sacks can appear at once, though this is the maximum. When that happens, four to eight wilds at random are added to the middle four reels.

Having extra wilds added to the game board makes the free spins worth quite a bit more than usual. What’s more is that the last spin is what Iron Dog Studio calls a lucky spin. If you get any win on this last spin, you’re given an additional free spins. This process can continue as long as you keep getting wins. As a result, you can actually end up with quite a few extra free turns.

How to Win at Merry Megaways

The regular game mode for this holiday-themed experience has a volatility that’s a little above the average. As a result, it’ll have some higher swings than usual. Additionally, a good way to adjust to this if you want is to lower your bet size by one position. This can take the edge off of the swings at the cost of slightly smaller wins in the absolute sense.

However, another way to win that has a higher volatility is to purchase your way into the free spins. This can be done by clicking the gold star in the top-right corner of the screen. A variety of options for how many you want to buy can be had here. With that said, what they all have in common is that using this option drives the volatility much higher.

Our advice is to lower your base wager by a lot to compensate if you purchase the free spins. However, players are free to play with whatever bet sizes they’re comfortable with.

It’s probably not a surprise to anyone that Santa is the best-paying symbol. Although he pays a strong 50x for six of a kind combinations, he has something else going on as well. Santa is the only symbol in this game to pay out for two of a kind. It’s actually for a relatively strong 10x win, which is great since wilds appear on the second reel to help out.

Next up is the reindeer with a 40x win for six. From there, six of the elves will pick up 30x wins. Additionally, prizes of 25x or 12x are yours for six of the candy canes or cake. Along similar lines, you can earn 12x for six of the milk and cookies in a decorative bow.

Iron Dog Studio used royal card symbols in a holiday font for the low-level symbols. For the red A down to the purple 10, the payouts range from 6x to 4x for six of a kind combinations of symbols.

In a lot of ways, the Merry Megaways slot reminds us of Jingle Ways Megaways. However, most of those similarities are on a superficial level. Once you get into the features and how the mechanics work, the titles are quite a bit different.

And that’s what makes this game so interesting and engaging. The holiday theme is common enough even though it’s done really well. Instead, what makes this slot stand out so much is the feature set. We love what they did with it and the opportunities it provides player to run up lots of wins.

Which online casinos have Merry Megaways?

What is the Return to Player (RTP) for Merry Megaways?