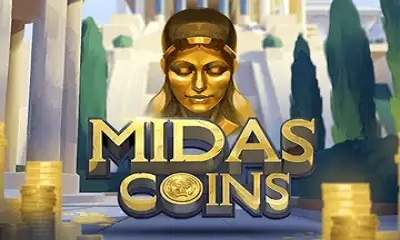 Quickspin’s Midas Coins online slot offers 25 paylines of fast-paced action. The game is based around the story of King Midas, a man who could turn anything to gold that he touched. Here, the gold is there to help kick your winnings into overdrive.

An Introduction to Midas Coins

The story of King Midas is a bit of a warning since he ends up turning his daughter into solid gold. Whoops.

That aside, there’s a lot of gold to be had in the Midas Coins video slot. Quickspin has made this game in a way that it really fits with the overall theme. Players are given a lot of excitement with the way the features are set up as well.

If you like a regal look and feel, and you like a high level of action, this is a game to check out for sure because it offers a great combination of these things.

Since this is an ancient Greek story, the look and feel of the game matches. The fonts used on several of the symbols looks Greek, for example. You can also see an ancient city in the background. The way things flow is really great with the animation style as well.

The gameplay style is feature-focused. While the regular pay table offers some strong wins, the real focus is on the bonuses. A few features are available, and they offer lots of ways to win some pretty substantial payouts.

With so many features, most players prefer a format that’s familiar. Quickspin understands that, and that’s why they used a common layout for this game. Here’s what to expect:

When you have a title like this, the volatility is really important. It’s firmly in the medium range here, and that will inform your bet sizing. Also note that wins are multiples of your total bet sizes. You won’t have to deal with doing math in your head to figure out payline-based wins here.

The Midas Coins online slot has a fun style of gameplay. It’s characterized by a lot of action driven by the features. Along these lines, we think players benefit a lot by knowing about the features before they start. That’s why we’re going to break down all of the features and bonuses in the following.

Marigold is (or was) the daughter of King Midas in the story. The problem is that he touched her, turned her to gold and didn’t have a good time after that. Fortunately for players, she’s not our daughter, and she’s the wild symbol in this game. Appropriately enough, she’s a completely golden symbol as well.

The payouts for this wild symbol are as follows:

This wild does not substitute for the non-standard symbols. As a result, it won’t count for the scatter or the Midas symbol. However, it will substitute for everything else in the game. That means that you have many more opportunities to get extra payouts from it.

Midas himself appears on the fifth reel only. You’ll know it’s him from the golden crown, the red background and the giant “MIDAS” display across his symbol. The Midas symbol is tied to the coin symbols that you can find on each of the first four reels.

When Midas appears on the last reel, all of the coin symbols pay out. Their payout values are listed on the coins themselves.

Something kind of cool about this is that there are actually four different coin symbols. Oddly enough, they are represented as silver instead of gold. The only difference between the four is the size of the coin. As you might have guessed, the larger the coin, the larger the available payouts.

The four coins, in order of size from smallest to largest, can offer the following values:

What this basically amounts to is a chance for random extra wins. These are wins you wouldn’t have hit on the regular pay table, but they add to your balance just the same.

The scatter symbols in the Midas Coins video slot help to trigger a set of free spins. They only make an appearance on the first, middle and last reels. When you get all three of them at once, they will also give you an immediate win of 2x. That’s on top of the 12 free spins that you’ll receive.

This feature is officially called the “All is Golden Free Spins” feature. It makes sense considering how it works. Every coin that lands on the game board starts off in a new section of the game. This section is called the coin stack. This stack actually starts at 3x. The idea is that the stack accumulates until you hit the Midas symbol. He’ll then pay out for the entire stack instead of only the coin symbols on the game board.

You can also get more free spins with scatters:

Because you only need a single scattered bonus symbol to add free spins, you’ll usually get at least a few over the course of the entire 12-spin bonus feature. It’s a cool way to make it easier to extend your bonus, so we’re all for it.

You also have the ability to purchase the free spins mode to trigger automatically. This costs 50 times the triggering wager, and you’ll start with 12 free spins as usual. Everything else about the feature is the same other than the fact that you’re paying to trigger it.

This can be a viable way to play the game, but you’ll probably want to adjust your bet size before doing it. We’ll get more into this down below.

How to Win at Midas Coins

There are two ways to play the Midas Coins video slot. The first is to go at it normally. In this approach, the volatility is in the medium range. As such, this means that it’s fine to pick a bet size around what you’re typically comfortable with. Other than that, there’s not much to say about this approach since there’s not a lot else to adjust to.

The second approach is to buy the free spins feature repeatedly. If you do this, then you’ll want to lower your bet size substantially. The idea is that buying the feature has a high price in and of itself. By lowering your base bet size, you make this more palatable.

It’s probably not surprising that so many symbols on the game board in the Midas Coins online slot are gold-themed. The top-paying regular symbol, for example, is a golden necklace. It pays out 32x for five of a kind. A bracelet and ring follow that, and they pay 9.6x and 8x for five, respectively. The pendant symbol with a blue symbol comes next with a 6.4x win for lining up five of a kind.

Card rank symbols come next. They appear in a way that looks inscribed in stone with a Greek font. The A and K both pay 5x for five. Likewise, a 4x win is yours for five of a kind combinations of the Q or J symbols.

Due to the fact that the Midas Coins video slot gives a high level of quality while still having a lot of value individually, this slot fits tremendously in this software developer’s portfolio overall, and what slot players will really enjoy about this title is the value that the range of features add to your winnings. The name of the game is excitement with this video slot, and that is great news for those who would rather have an action-packed type of gameplay.

The overall concept is handled in a really intelligent way in this title, as opposed to it merely being an afterthought like what players see in the majority of slots. Also, we really like how the aesthetic appeal gives players an overwhelmingly intense play style instead of only being an unimportant detail.