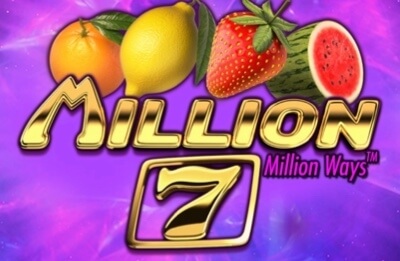 The Million 7 online slot by Red Rake Gaming has one million potential ways to win on every single spin, and that’s not counting bonus features or scatters. This fruit machine-style throwback title gives players an overwhelming amount of action and a tremendous sense of having the ability to win several times over on each and every turn.

Red Rake Gaming is a company that often produces titles based more around gameplay elements than presentation or giving players a lot of flash with no substance. The Million 7 online slot is a good example of a gameplay-focused title with a throwback classic slot style of theme.

However, the action is much more than you’d ever get from a three-reel title: This game has one million ways that can be used to get you paid on every turn of the reels.

We think that this premise for a game is very intelligent, and it provides an incredibly action-oriented style of play while still retaining a pretty low volatility thanks to how high the overall hit-rate is.

The format of this game is the major focus of the slot as a whole, and we want to be very clear on what’s being offered here:

The betting aspect of this game is straightforward with most symbols requiring just three of a kind to get a win. This keeps the hit-rate pretty high and the volatility low.

As if the format itself wasn’t enough to keep the action serious enough, this title is jam-packed with all different kinds of features. These features offer bonus rounds, but they also offer extra ways to get paid within the context of the regular game mode as well.

There’s also a silver M symbol that can appear on the second or third reel. When it does, it becomes a wild symbol and locks that reel into place. This then turns into a sort of free spin with a re-spin of all of the other reels.

What’s really cool is if you get both of these on the second and third reels at the same time. They both become wild, but they also multiply your win on the re-spin by a factor of two. This is a cool multiplier that also includes several guaranteed three-of-a-kind wins built right in.

Players will find two scatter symbols in the Million 7 online slot. The first is the golden 7 symbol, and it can appear on every reel, but it can only appear in one spot on each reel at a time. The wins for this symbol are as follows:

For the silver 7 symbols, up to two can appear on each reel at once, which adds to the available payouts. Twelve of a kind gives you a 100x win, and you can get paid for as few as just three of a kind for a 1x win.

Note that for both of these scatters, you’ll get paid no matter where they land or which reels they show up on, and they do not have to appear on left to right consecutive reels.

If you get three of the Golden M symbols on the reels of the Million 7 online slot all at the same time, then you’ll trigger the Frenzy feature. The way this works is that the middle two reels combine to give you some pretty huge multipliers and chances to win multipliers up to 36x along with an opportunity to pick up 20 free spins or a play at a mini card game type of bonus feature.

This is a cool way to add some extra opportunities to get paid, and they offer a variety of different features and sources of value.

The mini card game mentioned above is called “Frenzy Sevens,” and it’s all centered around picking from available cards one at a time. If you get a seven, you’ll add the associated prize to your total (listed on the left-hand side) and get another pick. All of your wins are combined until you pick a color seven that you have already chosen.

Once you have two matching sevens, the feature is over, and all of your wins are combined and are added to your total.

In the regular game mode, you can get three or more cash symbols at the same time to start the Money Collect feature. The basic idea is that all of the blank spaces will spin and be converted to money symbols. Some of them can contain 2x multiplier versions of this symbol as well.

Each of the symbols and their respective multipliers are combined to give you a total win based on a multiple of your bet size.

How to Win at Million 7

The main things to remember about Million 7 are that the volatility is pretty low and that there are a few features that pack more value than the regular game. If you keep these two things in mind, then a strong strategy becomes apparent:

We recommend keeping your bet level a little higher than you’d normally play with because of the lower than average swings and pairing that with somewhat longer sessions to maximize your chances of getting a big payout from the features that come up the least often.

The low volatility will keep the swings from being too bad, and it makes the longer sessions more interesting since your wins will be bigger than they usually are as well.

All of the symbols in this game are like what you would find in a throwback style classic slot. With that said, the pay table is pretty flat and balanced for the most part, and you’ll need three of a kind to win with any of the following.

Six of the red seven gets you 20x, and six of the diamond symbol pays 10x. Those are the two major top payouts.

From there, the blue triple bar, orange double bar and purple single bar all pay out 2x for six of a kind. You can earn 1x for six of the bell or 0.8x for six of the four fruit symbols: strawberries, watermelons, lemons and oranges.

The key thing to remember here is that multiple matching symbols on the same reel as a part of a winning combination effectively act as a multiplier. For example, the win for four diamonds is 1x. However, if there were three diamonds on the second reel and two on the third, your actual win would be 6x total.

If you like a ton of action, then the Million 7 video slot by Red Rake Gaming can make that happen. It has a tremendous hit-rate with what’s really more than a million ways to win on each turn if you take into account the bonus features and scatters, so it’s clear that action is the name of the game here.

The throwback aspect of the title is done well also, and it comes across as visually simple but neat instead of looking like it has dated graphics.