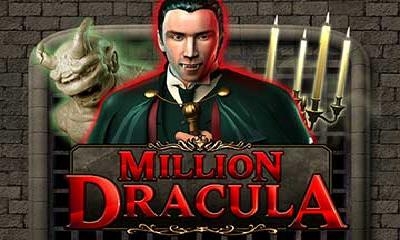 The Million Dracula online slot by Red Rake Gaming has an innovative play style where wins increase the size of the game board repeatedly. You’ll also have wilds, which are extremely valuable in this formation, along with a free spins bonus round that accelerates the size-increasing feature from the main game mode.

An Introduction to Million Dracula

If you’ve been around the online slot industry for a while, you can get to the point where you think you’ve seen it all. That’s how we felt before we first took a look at the Million Dracula video slot, but Red Rake Gaming has changed our mind on that.

This game offers an innovative style of play with a key feature that drives the gameplay that we’ve never seen used.

It’s a result of this feature that the gameplay is very exciting. While it’s different, it’s still familiar in certain ways, so you don’t have to worry about things being so far outside of the box that you have to learn something completely new, which can be aggravating when you just want to relax and enjoy a cool game.

The theme and concept are done really well here. Aside from the gameplay, the visual appeal is strong with play appearing the take place in the doorway to Dracula’s castle. The gate can raise up to allow more ways to get paid, which is a key component to how this title is played, and even the music fits the atmosphere perfectly.

The layout here is atypical in certain ways and familiar in others. We’ll break down what you need to know here in terms of the basics, and we’ll jump into the complications down below when we look at the feature set.

The hit-rate for this game is pretty substantial, but the gameplay features add some variance, which is why we put this in the medium-low range as far as volatility is concerned. The swings will not be something that most players have to worry about, however, because they’re not severe at all most of the time.

The gameplay of the Million Dracula online slot is where most of the attention will come toward this game, and that’s in spite of the fact that the visual appeal and presentation are both very strong. We’re going to break down what you can expect in what follows.

His name is in the title, so this incredibly famous vampire makes sense as the wild symbol. He substitutes for everything but the scattered bonus symbol, and he also gives some strong payouts of his own:

While these may seem like low payouts initially, keep a few things in mind. First, these are multiples of the total bet size. Second, these wins will often be multiplied if you get more than one matching symbol on the same reel, which is very possible with the way this game’s feature set works. Third, the wilds will help you to get plenty of other wins that you would have missed out on otherwise.

When you hit a winning combination of any type, you activate the gate raising feature. You’ll notice that there is a gate over the top of all of the symbols when you start play and that these symbols are shoved down to the bottom of the game board. This is because there are more rows of play that can be opened by the gate raising up.

The gate will raise up when you have a spin that includes at least one winning combination.

The way this works is that the gate raises up, and then players can see another row added to the top of the existing rows. If new ways to win are added as a result, the process continues until the new row does not add any new wins. Note that this can be a new winning combination or even something as small as a single symbol that adds one more win

You start play in this game with 729 ways to win, but the number of rows can drastically increase your ways to win along the following lines:

The million in the name of the Million Dracula video slot refers to the maximum number of ways to win that you can get in this game along the above lines.

An important symbol in this game is the goblet full of blood. This symbol is a scattered bonus symbol, and it gives you free spins along the following lines:

These goblet symbols can show up anywhere on the game board, and the odds obviously increase with the row expansion feature that happens when you get wins and the gate increases. The number of free spins you are awarded will be determined once the gate has finished rising.

How to Win at Million Dracula

With the Million Dracula video slot, you get a medium-volatility title in a scenario with a high hit-rate. Both of these pieces of information would indicate that using a bet size on the upper end of what you’re comfortable with is the best way to go since it increases the size of your payouts in the absolute sense while still keeping the swings to a manageable level.

Something in the range of 25 to 50 percent more per wager than you’d normally bet is probably the upper limit to what players can use here without seeing the swings start to get noticeably more impactful.

There different candle symbols can be found on the reels in different colors with different numbers. They all pay 0.75x for six of a kind combinations, however, which makes it pretty easy to keep up with the wins.

Finally, all of the card rank symbols also have thew same payouts. This includes the green A, blue K, purple Q and red J, which all pay out 0.5x for six of a kind combinations.

This game brings a lot to the table that players can get excited about, but the main thing about the Million Dracula slot that stands out is its absolutely huge layout that’s available with the gate feature. Add in the free spins and wilds, and you have a feature-rich experience that brings a ton of action for players.