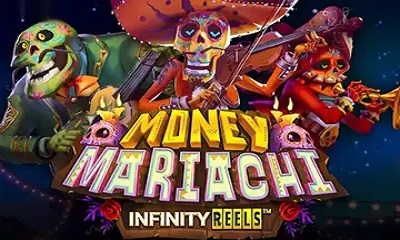 The Money Mariachi online slot from ReelPlay uses their Infinity Reels format to bring players a continuous stream of action. You can get huge winning payouts on several reels in a row in this title. However, it also offers a re-spins mode with several special goodies.

An Introduction to Money Mariachi

An online slot is often “make or break” on its gameplay and presentation. If a title has one of these at a high level, it’s virtually always received well. However, if the developer is able to really nail both, it can become an instant classic. We think that it’s completely reasonable to include the Money Mariachi video slot from ReelPlay in this latter category.

They were able to bring an exceptionally good-looking game here with a really strong style of exciting play.

The theme is based on a sort of combination of mariachi band members and a Day of the Dead look. However, it’s the drawing style and animation that really catches our attention the most. Simply put, this title looks nothing short of amazing, and we would put it side by side with any other title that has ever been produced. It’s really that good from a visual standpoint.

When it comes to the gameplay, it’s very solid. With the Infinity Reels style, you get something a bit different that still looks and feels familiar. This helps with the dynamic of getting outside of the box but not so much that it’s alienating. With several features and ways to get extra value from the re-spins mode, you have a lot to look forward to. However, the regular game mode is strong as well because the Infinity Reels game mechanic keeps the action serious.

As we mentioned above, this title uses the Infinity Reels format. If you aren’t familiar with this format, it’s not difficult to learn. In fact, it can become familiar in just a few spins. However, you’ll want to know how the payouts are determined since it’s pretty atypical. In any event, here’s what you need to know about the layout:

The volatility of this game as a whole is around average compared to other titles released in the modern era. This doesn’t leave much room for bet sizing adjustments, so that’s one fewer thing to worry about. However, you do have the option to buy the bonus feature for 100 times your total bet size. This is a much higher volatility option, so we recommend dropping your bet size quite a bit from the norm if you choose to go this route.

With the Money Mariachi online slot, the gameplay can get pretty intense. Along these lines, it’s pretty important to have a decent idea of how the features and game mechanics operate. Otherwise, we can see how it could be easy to get a little confused about what’s going on. To this end, we want to make sure that you have everything you need in the following to know how this game works before you get started.

This game has two symbols that do not behave like the rest in terms of gameplay mechanics. Accordingly, they’re the best place to start if you want to understand how this game works as a whole.

The first is the wild symbol, which is a guitar. That may sound mundane as a symbol, and this may sound overly dramatic as a description but we stand by it: This is one of the coolest and most gorgeous wild symbols we have ever seen in any online slot ever in the history of the industry, bar none.

Additionally, it offers a pretty good value because it substitutes for anything in the game. On top of that, it often appears stacked at least two spots high, which adds to the value. With that said, it does not get its own combination wins. Also, it will not substitute for the shrine scatter symbol.

However, one thing it can do is count as a part of multiple wins. This is especially important on the first few reels. Additionally, because of the way the game mechanics work, if you get a wild on a new reel where you have a non-scatter win of any kind, you’ll always be given another reel after that.

The shrine is the scatter symbol in this game. It looks like a skull on a golden platform with a purple carpet rolled out in front. When at least three of these land on the board at the same time in any position, you trigger the LevelUp Re-spins feature.

You start this feature with three re-spins. Every shrine symbol is held in position to start with. However, all other spots will spin again. If you get a new shrine anywhere on the game board, you start back over with three re-spins. Note that all of these new shrines are locked in place as well. Additionally, filling a reel vertically with four shrines adds another reel to the game.

Each shrine is given a random payout worth up to 10 times your total bet. However, every re-spin gives a skull to the shrine. Six skulls levels that shrine up and increases the win it provides by up to 10x again.

Additionally, every shrine that levels up and transform into a special symbol that offers one of the following features.

As you can see, these transforms add quite a bit of value to the re-spin feature.

How to Win at Money Mariachi

With the Money Mariachi video slot, the volatility is around average. This comes from the high hit-rate of the regular game mode combined with the balance of the features. As such, no real betting adjustment is necessary for the volatility.

However, if you’re a player who is not familiar with the Infinity Reels format, you may want an adjustment. At first, you may want to drop your bet size down a bit until you get comfortable with it. This is definitely a gameplay style that isn’t exactly typical. However, it’s not too difficult to follow once you see what’s happening.

Also, if you’re going to buy the bonus feature for 100x your bet, we suggest dropping your bet size substantially. This will increase the volatility quite a bit accordingly.

If you get a win that includes symbols on the far-right reel, an additional reel is added. Each additional win increments the win multiplier to give you even better payouts for the entire combination.

The dancing lady in red is the best-paying regular symbol with a 5x base value. Additionally, the violinist has a 4x base value. From there, the base values of the trumpet player and the guitarist are 3x each.

The candles, grave and maracas all have base values at the 2x level as well. Finally, the hat, glowing blob of wax and black set of flowers all pay based on a 1x base value.

Due to the fact that the Money Mariachi online slot brings a serious degree of quality while still standing out on its own within the sub-genre, this slot fits really well in ReelPlay’s offering of games as a whole. We also want to point out that if you have been a fan of other games that use this kind of overall format, then this is a video slot you will not want to miss out on.

The pay rate of the selection of features in this video slot is large enough that players will certainly not get bored, and the level of graphics of this slot is top-tier and enhances the whole style of gameplay. On top of that, the gameplay in this video slot gives a ton of fun.

Which online casinos have Money Mariachi?

What is the Return to Player (RTP) for Money Mariachi?