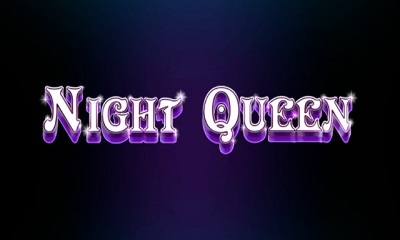 The Night Queen video slot by iSoftBet takes players into a fully Gothic experience. The action is serious with stacked symbols, free spins, giant symbols and more. It’s all capped off by a very dark and fun soundtrack that really sets the overall mood of the game.

An Introduction to Night Queen

If you’re interested in games that have a dark slant to them, then the Night Queen online slot is something to check out. The game looks tremendous, and it has a pretty solid play style as well.

What stands out to us also is how clean the interface and graphics are. Normally, dark-themed titles look a bit cluttered. However, that’s not the case here.

Everything that this game has to offer is all about the dark side of things with a bit of magic. You’ll see it more implied than straight-up put in your face. That adds a different feel than most games with a similar concept.

The play is pretty good too, but it’s definitely a little on the atypical side. There’s a big focus on the stacked symbols and how that makes it easier to get multi-line wins. Other standard features play a part in the payouts as well, but they all really center around the stacked symbols. It’s not really a bad thing, but it’s worth noting so that you know what’s going on when you play.

The layout for the Night Queen slot is set up in a way that’s easy to jump right into. There’s nothing particularly atypical or different here, and that’s great for most players. Here’s what to expect:

Everything about this title has been put together in a way that it’s accessible to all players. The betting controls in particular are really easy to use. You’ll find that the volatility is in the medium-low range, which is suitable for most people as well.

Aside from that, we want to point out that wins in this game are multiples of the total bet size. They are not listed in terms of coins, but you can multiply them by 20 if you’d like to know how many coins are being awarded.

With the Night Queen online slot, players have a handful of features. This feature set and play style really lends itself to chances for multiple wins on the same turn. While this style works for most players, it’s not always a good fit for every single individual. Even if you think that’s you, we suggest you give it a try because it’s a bit atypical.

The wilds appear as heart-shaped gemstones on a blue, shining background. These wilds appear on all five reels, and they help you to get extra payouts and wins. The prizes for these wilds include the following:

The only symbol in the game that the wild doesn’t substitute for is the Night Queen video slot logo scatter. Outside of that, there are plenty of wins that you’ll pick up that you would have missed out on without the wild.

After any spin with stacked reels full of the same symbol, they can randomly activate the Switching Stacks feature. This will have the full stacks move around to different reels. The idea here is that they’ll move around in a way that will give you better payouts than usual.

If you get three or more reels full of the same symbol, and if they are a part of a win, this activates the Colossal Multipliers feature. The matching symbols will all merge, and then a random multiplier will be applied.

This is multiplied by all of the wins formed by the large group of symbols.

You can get a multiplier of as much as 30x in this way, which obviously adds a lot of value to the situation.

The scattered bonus symbol is the Night Queen online slot logo here. You can get different numbers of free spins based on how many scatters you get on the game board at once.

During the free spins mode, all of the other features can trigger and be active. However, you can also get stacked mystery symbols that all turn into a randomly chosen regular symbol at the end of a spin. This further increases the chances of wins and of triggering the Colossal Multipliers feature.

How to Win at Night Queen

With a medium-low volatility, the adjustment to make for this game is to go with a slightly larger bet size than you might normally use on average. The reason for this is two-fold. First, the swings are still going to be reasonable because of the medium-low volatility and the sizable hit-rate. Second, the payouts you receive will be proportionately larger than usual.

Bet size choices are in place to primarily protect you from swings, and you’re still able to do that here.

At the top end of the pay table, other than the wild, is the Night Queen herself in purple. She gets you 5x for five of a kind. The man in blue pays 4x, and the horse gets you 3.5x for five. Five of the black raven pays 3x. Note that these pays are really balanced, and they do not drop off very hard.

The card rank symbols are similar in this way. Both the red A and orange K symbols pay 2x. However, the yellow Q and blue J are each worth 1.25x for five. Finally, five of the purple 10 on a payline gives a 1x prize.

The Gothic concept put into play as the basis for the Night Queen video slot is a strong foundation for the gameplay and excitement. As if that wasn’t enough, the gameplay style with this slot brings a serious degree of fun.

On top of that, the presentation and aesthetic appeal of this slot gives an aesthetically pleasing vibe that’s definitely comparable with several of the best that the online slots world as a whole has to offer. Because of the wide appeal to so many players, this video slot has a perfect position in this developer’s selection of slots as a whole, and the hit-rate of the features in this video slot is serious enough that video slot fans will definitely not get tired of playing.

Which online casinos have Night Queen?