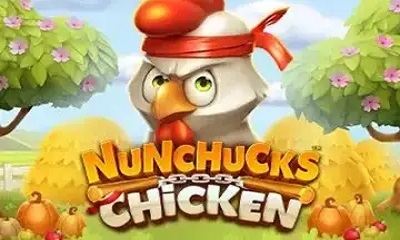 The Nunchucks Chicken online slot is a game by Skywind that takes kung fu fighting off to the farm. You’ll see this skilled chicken face off with other farm animals all while you get to collect the rewards. With scatters, re-spins, wilds and other ways to get paid, this is a very action-packed slot.

An Introduction to the Nunchucks Chicken Slot

We’ve seen no shortage of slots based around animal themes before. However, we have definitely never seen something like the Nunchucks Chicken video slot. This game takes players to a whole new level of hilarity with animals facing off on the farm.

Skywind slots are known for their crazy themes, but this is ridiculously funny even for them.

What you’ll find on the reels are animal symbols that have been crafted with a lot of care. The presentation of this game is a bit soft in appearance, but the theme itself makes it sharp at the same time. Instead of taking the idea of animals fighting each other in kung fu battles literally, it’s meant to be funny and lighthearted, and that’s how it’s presented in this title. Additionally, the background has a fun farm animal theme as well.

We really think the gameplay is what will make players sit back and realize this title has more depth than they might have otherwise expected. For example, the features actually compound each other’s value instead of acting independently. This reminds us of another animal-themed online slot that does the exact same thing with its features. However, the game board is also larger than usual, much like that game does, which provides plenty of room for those features to play out as well.

The layout of this game is larger than normal, but it’s really easy to learn. Overall, Skywind online slots aren’t particularly complicated as a general rule. We like that they held to that idea here as well because it makes it so much easier to jump in and start playing. Here’s what you can expect:

The overall volatility of this slot comes in around the medium range, or about average for the industry. This is pretty consistent with the combination of the balanced pay table with the value-oriented features. Additionally, this allows for some chances for bigger wins without the swings getting too hectic.

Payouts for this slot are coin-based and are not based on your total wager. This creates a situation where you can divide these numbers by 25 to see how much they would be if they were listed as a multiple of the overall amount you’re betting. Some players prefer one approach over the other, but it ultimately doesn’t matter much.

Gameplay and Features for the Nunchucks Chicken Video Slot

The Nunchucks Chicken online slot offers players a number of different features, game mechanics and extra ways to win. However, it’s not a super difficult game to learn. If you read over our breakdowns of the features in the following, you’ll be able to hop right in and start kung fu fighting it up with all of these animals.

In the King Carrot farm-based slot, which also has a larger than usual format, you run into a situation where the wild absolutely dominates the game. While it’s not that extreme in this case, you will find that the wilds are really important for more than one reason in Nunchucks Chicken. However, that makes sense considering the nunchucks are the wild, and they’re located in the name of the game.

In any event, you’ll want to know first and foremost that these symbols pay out really well. Here are the wins you can get with combinations of wilds only:

When you get these wilds on the board, they substitute for all non-scatter symbols. Subsequently, they assist you in getting better wins than you would normally get on average. The value of these wilds is easy to overlooking because they’re such a common symbol in the genre as a whole. However, the reality of the situation is that they can frequently be the difference between having a winning session or not.

If you get two of the scattered chicken symbols on the board at once in the Nunchucks Chicken video slot, you’ll trigger the re-spin feature. Note that these scatters only appear on the middle three reels.

When the re-spin begins, you’ll start by being shown a multiplier ranging from 2x to 50x. However, this is only the beginning. The reels will spin, and if they do not yield some type of win, your multiplier will increase by one. From there, the process continues.

Once you get a payout, it will be hit with the multiplier you were granted at the beginning. From there, the feature is over, and you go back to the regular game mode. Additionally, note that you cannot trigger the showdown bonus from this feature.

The main bonus feature for this game is the Shuriken Showdown. You need three scatters on the board at once during the regular game mode to get access to this bonus round.

You will see a 6-by-6 grid full of different crates that can be busted open to reveal prizes. These prizes can be instant wins, multipliers or improvements to existing wins.

However, what you’ll really like is the bomb symbol. It blows up every single crate on the board in the feature. As a result, this leads to more symbols falling down into place.

You have the ability to buy your way into the Shuriken Showdown bonus round. Note that this isn’t uncommon since you can do the same thing in the farm-themed Harvest Wilds slot game. Regardless, in the Nunchucks Chicken slot, it will cost 100 times your total bet size to purchase the feature in this way.

We like the idea of players having the flexibility to start bonus rounds whenever they want in this way. However, we do recommend that you lower your base wager a lot before doing so. The reason for this is that buying the feature is a very high-volatility approach that will drastically increase your swings.

How to Win at Nunchucks Chicken

Speaking of volatility, it’s really average overall for the game as a whole. This includes using the side bet, which doubles your chances of triggering the features. However, in exchange for this extra chance, you’ll see your bet size increase by 20 percent. With that said, your wins will still be based on the original base wager that does not include that increase.

The swings aren’t really strong in this title overall. As such, we generally recommend just picking a bet size that fits for you on average and going with it.

The fox is always trying to get in the hen house, and that makes him the chicken’s natural rival. Five of a kind of this sly animal will you get a 250x win. Additionally, payouts of 200x and 150x are yours for five of the horse or cow symbols, respectively. You can also earn 125x for five of the big, and five of the blue sheep earns you a 100x payout.

We really like how Skywind handled the card rank symbols. They look great in a wooden pattern that fits the farm aesthetic but also fits the overall color scheme. With the purple A and blue K symbols, you’ll earn 50x for five of a kind combinations. Additionally, players can pick up 30x prizes for five of the green Q or yellow J.

The gameplay style for the Nunchucks Chicken online slot offers a serious degree of excitement with the way the features work. We also want to point out that the feature set incorporates several various additional ways to get paid outside of the regular pay schedule.

If you have liked other titles that center around this style of farm animal theme, then this is a slot you definitely won’t want to miss because the kung fu fighting element just takes it over the top. Additionally, graphics style and feel of this game offers a fun and relaxing look that isn’t all that common. Regardless of what you tend to like in slots, we’d be willing to bet that you’ll enjoy something about this game because it has such a wide appeal.

Which online casinos have Nunchucks Chicken?

What is the Return to Player (RTP) for Nunchucks Chicken?