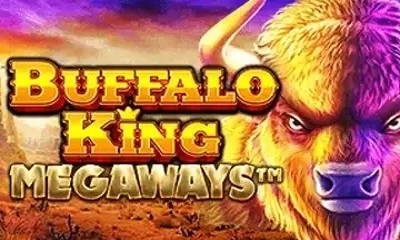 In the Buffalo King Megaways video slot, players get an opportunity to run up thousands of ways to win. Along with that, you are given access to activate a free spins feature that offers a lot of extra opportunities to get paid. Additionally, you can double the chances of free spins with a simple side bet.

An Introduction to the Buffalo King Megaways Slot

If the name of this game seems familiar, it’s not a trick. This is an updated version of one of Pragmatic Play’s most popular slots ever: the original Buffalo King. However, this time around, you have even more ways to win than the 4,096 from the original.

With more ways to get paid, the Buffalo King Megaways online slot is able to provide more action and a higher hit-rate as well.

The gameplay of this title is really something worth checking out. This developer has completely packed the reels with a wide range of opportunities to get paid. However, it comes from both the regular pay table as well as the value-packed bonus features. The original was a perfect choice for refitting around the Megaways format since it already had a lot of ways to win. Along those lines, you can tell just how suited the style of play is to this kind of layout.

This slot is super solid visually as well. It’s based on a North American wilderness type of theme. You’ll see a variety of animals from that part of the world there. This includes wild animals from Canada, the United States and Mexico primarily. However, they’re drawn in an aesthetically pleasing way that really brings out the personality of each animal. With a wide background across the mesas and desert, you’ll feel the real sense of being there from the presentation alone.

The layout for this game is within the bounds of the Megaways lineup. However, not all of the games that share this type of format are the same. Just because you’ve played one does not mean you’re anywhere close to having played them all. Subsequently, we want to break down how this layout works so that you know exactly what you can expect:

You also have a side bet that’s important for the features. However, we’ll get into that further down below. It suffices to say that you should always have it turned on, and your volatility with it activated is above-average overall.

In the pay table interface, you’ll always see your wins listed in the currency amount they’ll be paid. This makes it really easy to follow as you change your own bet size. For our purposes below, however, we’ll list them out as a multiple of the total amount you’re wagering.

Inside of the Buffalo King Megaways slot, you need to keep in mind that the regular game mode can easily have thousands of ways to win. This is thanks to the Megaways format that was invented by Big Time Gaming and licensed for this Pragmatic Play slot. Additionally, this largely pushes along the action at a really quick pace. However, you have a split between two major types of features in this game.

Some of them improve the value of your regular spins. On the other hand, others will give you bonus rounds that award value in other ways. Combined, the action is super serious, so you need to know what’s going on. Here we’ll break it all down for you step by step.

Cascades are used in this title to make it easier to pick up several wins all in a row. That’s because symbols from individual payouts disappear after awarding their wins, which allows new symbols to fall down into place. From there, new wins have a chance to occur. If they do, you re-trigger the entire process all over again.

As you can see, these cascades are a big part of the action. They also provide a lot of synergy with the Megaways game mechanic because of the large number of ways to win.

The main symbol to watch for in the regular game mode is the wild mesa. It has a golden border around it, which makes it really easy to follow. Since this is one of the most popular Megaways slots out there, and these wilds really drive the point home about why this format is so popular. That’s because a single wild can lead to several more winning payouts in this title all on an individual spin.

With all of that said, you need to know that that this game does not have wilds on the first or last reels.

Instead, they only appear on the middle four reels. Along these lines, they cannot get you winning combinations on their own.

The bonus symbols help you to get Buffalo King Megaways free spins, which we’ll look at further down below. However, first we want to look at how they’re responsible for some of the best payouts in the game. These wins are available as follows:

Like all other payouts in this title, these wins are multiplied by your overall wager. Additionally, they’re able to be won no matter the location of the bonus symbols that trigger them. That makes it particularly easier to land the four and five of a kind variations.

Not only can four or more of the scattered golden buffalo coins get you strong payouts, but they can also earn you sets of free spins. Here’s a quick look at how many you can earn with this scatter:

During this free spins mode, all wild symbols are given random multipliers. The value of these multipliers can be 2x, 3x or 5x apiece. The multiplier for those wilds are accumulated across cascades, which is then applied to your total payout for the entire set of wins across those cascades.

Re-triggering only requires at least three bonus symbols during this mode. However, no matter how many scatters you get, three or more will only add five more free spins. With that said, no maximum has been put in place in this Pragmatic Play slot.

Note also that you can purchase this feature with a wager worth 100 times your overall bet. However, your number of free spins is random between 12, 17 and 22.

How to Win at the Buffalo King Megaways Online Slot

With a volatility level that’s quite a bit above average, we suggest dropping your bet size a bit to compensate. That will give you the best opportunity to smooth out the higher than normal swings that come with a medium-high volatility level. Your wins will scale down accordingly, but it’s worth it for players who want more balanced styles of play.

However, keep in mind that this is completely optional. You should make sure to play with a bet size that’s within the bounds of what you’re comfortable with overall.

Payout Structure for This Slot

The buffalo himself is the only symbol in this title that pays for two of a kind. However, six will earn you 20x, which is the largest non-scatter win available as well. For the eagle on the blue background, the win is 6.25x for six of a kind. Additionally, six of a kind combinations of the cougar are worth 3.75x. Winding down the animal symbols are both the wolf and moose, that each pay out at the 1.5x level for six.

The card rank symbols all have wins from 1x to 0.6x for six of a kind combinations. The pay table is fairly top-heavy overall, as you can see here. That’s important because it contributes to the higher than usual volatility.

Overview of Buffalo King Megaways: Pragmatic Play Did It Again

Pragmatic Play’s rendition of the original version of this game is an absolute joy to experience. The action has been somehow increased from the 6×4, 4,096 ways title that came before. Additionally, they’ve added even more action with the feature set. All of this is impressive because the original itself had so much to offer to begin with.

It’s worth pointing out that the theme of this game is really similar to Beasts of Fire if you’re looking for titles with a similar feel.

Aside from that, we like how the graphics capture the overall feel of being out in the mesa-filled wilderness. It’s the perfect choice of setting for this title, and the animals on the reels and color scheme really tie it all together.

What is the Return to Player (RTP) for Buffalo King Megaways?