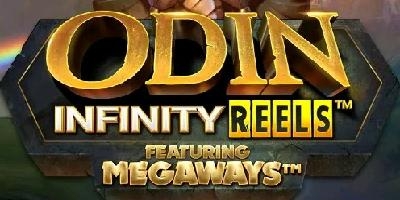 The Odin Infinity Reels online slot by ReelPlay incorporates the Megaways format and gives players an infinite number of ways to win with an infinite number of potential reels. This atypical layout lends itself to a tremendous amount of action, and that puts players in a position to win a lot of small, medium and large prizes.

An Introduction to Odin Infinity Reels

Norse mythology has been something that has fascinated much of the world for a long time, and its characters and stories have been adapted into everything from comic books to video games, movies and television shows. The Odin Infinity Reels video slot is a game produced by ReelPlay that offers players an opportunity to enjoy a gameplay style that’s much different than what you’ll find virtually anywhere else.

The format and gameplay are tied together as critical parts of each other, which gives this title a unique feel.

The aesthetic aspects of this game shouldn’t be overlooked, though it’s inevitable that they will be by most players who just see the atypical format and get interested in that. The background is tremendous, and the characters and other symbols on the reels are competitive with anything else that you could find by any software provider.

This is definitely a title that delivers both in terms of visual appeal but also in terms of gameplay, which is also something that isn’t particularly common.

The atypical layout takes some getting used to, but once you understand the basics of how it works, it feels exciting and familiar at the same time. Here’s what to expect on a basic level, which we’ll elaborate on down below:

Something that we want to make clear from the beginning is that all of the wins in this game are described as numbers of coins (except when specifically noted otherwise). This means that a 100x win with a €0.10 coin size would be worth €10 total.

The volatility of this title is in the medium-low range. The exceptionally high hit-rate that comes from the format in general lends itself to a moderate volatility in this way.

The Odin Infinity Reels video slot is completely packed with fun features that drive the gameplay and that take advantage of the exciting, atypical format. Understanding how these features work before you play will save you a bit of confusion the first few times you hop on the reels.

The first thing you need to know about this game is how regular payouts are determined. Each symbol has a value attached to it on a per-symbol basis. We look at the specifics of these values below when we go over the payout structure.

The number of symbols in the combination combined with the value of that given symbol is the base value of the win.

The end result is that longer winning combinations are disproportionately larger than slightly smaller ones, which is characteristic of many slot pay tables in general, but this approach allows for an unlimited number of reels and a clear way of determining any particular payout.

The golden valknut symbol is the wild in this game. Most people reading this probably do not know what a valknut is, but to put it simply, it’s a design of three overlapping triangles. Since there’s nothing else like it in this game, it’s pretty easy to spot.

It’s worth noting that these wilds do not get their own payouts in this game.

The wilds are worth a lot here because of two reasons. The first is that they’re valuable in general in a Megaways-format slot because of how many extra ways to win that they can provide you. In this title with the infinity reels layout, however, there’s even more to it.

If you have a winning combination going with extra reels being added each spin, a wild can be the difference between extending your win (and therefore your symbol multiplier) further instead of having it cut off. This adds a lot more value than what you’d normally get from a wild in a slot with a more traditional format, and that’s worth keeping in mind when they appear.

The wild does not substitute for the golden gungnir symbol in the Odin Infinity Reels online slot.

The gungnir symbols are the golden trident that looks like the end of a spear. They’re the only symbol that is not substituted for by the wild symbol, but they otherwise give some pretty usual payouts as a part of the overall pay table.

With that said, any winning combination of this symbol, even just three of a kind, will trigger a free spins bonus round. You’ll be taken to a set of two reels that will give you two pieces of information at random: The number of free spins and the level of your free spins.

The free spins level has to do by now much the symbol multiplier increases with each extra reel, and this can be up to a factor of four. Moreover, this multiplier does not reset between free spins, so there’s a lot of value there as well.

You can be awarded eight, 10 or 12 free spins at once. There is an opportunity to add on more with more gungnir wins during the free spins bonus round, and that will get you an additional four free spins added on with each win.

How to Win at Odin Infinity Reels

The hit-rate and volatility are a little misleading here. The hit-rate is pretty high, but the volatility is still well up into the medium range. There are a few reasons for this, but one of them is that you’ll have a small chance of winning some huge payouts on every spin just because of the way the format and features work together.

Overall, we suggest just using a bet size that you’d normally be comfortable with in general or even going slightly smaller if need be based on the available betting increments. The swings in this game can be deceptively sizable, though not outright huge in most cases, due to the hit-rate being so good.

There are five top-tier symbols. The per-symbol amounts for each of them start with 6x for gungnir, even though that’s not the best-paying symbol in the game. Those honors go to Odin, which makes sense considering his name is in the title of the slot. He pays 8x. You can win 5x to 4x for the other three animal symbols. The runes in different colors pay ranging from 1x to 3x each.

ReelPlay really brought something different to the table with their Odin Infinity Reels online slot. The format is particularly atypical, but it gives players a ton of value with some really cool, high-action, high-value features. If you’re looking for something that’s a bit off of the beaten path but that isn’t completely outside of the box, then you could do much worse than this title.