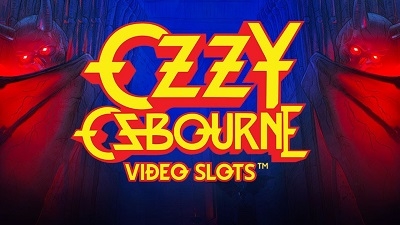 Ozzy Osbourne is known for being one of the greatest rock and roll icons of all time, and the Net Entertainment-powered video slot by the same name captures all of the excitement and craziness of his career. This game features a solid rock and roll soundtrack along with re-spin features, free spins, multipliers, a bonus bet and more.

An Introduction to Ozzy Osbourne

When you first look at the Ozzy Osbourne online slot, you’ll notice that it has an occult look and feel to it with skull heads, bat wings and a demonic-looking gate in a night scene with thunder and lightning in the background.

This is the perfect visual representation of the motif that Ozzy held throughout his career that powered his music and his overall look.

From this, it’s clear that this title is super solid from a visual standpoint, and the soundtrack is great also.

On the gameplay side, everything is about the action that you get from the features, and they are held in a way that interact with the symbols in the background. This isn’t something that you see everyday in the online slot world, and we think it’s cool that NetEnt put together something out of the box like this for Ozzy.

The layout of this game centers around a certain bonus bet, but we’ll give you everything you need to know about the title here:

We should point out that the volatility of this game is in the medium range, and we also want to point out that you should always play with the Bonus Bet turned on for players who are just skimming the basics. We go further into why that is the case down below.

The Ozzy Osbourne video slot is heavily dominated by a set of bonus features. They’re easier to hit than what you find in most other games, so that makes plenty of sense. Additionally, the pay table is pretty balanced and generous, and this helps to keep the volatility from getting out of hand.

A bat with a skull for a head is classic Ozzy symbolism. They’ve included this as the wild symbol in this title for good reason.

Here are what you can expect in terms of payouts for this important symbol:

These wilds clearly appear on all five reels, and they will give you opportunities to get paid that you would have missed otherwise. The only symbols they do not count for are the scatters, which are the other most important symbols in the game.

The devil pyramid symbol is the scatter in the Ozzy Osbourne online slot. It will give you chances to show up on the first, third and fifth reels only. Instead of giving you payouts, it gives you two ways to trigger bonus features.

We’ll look at the features themselves down below, but it’s important to note that everything the scatters give you are improved by the Bonus Bet option that’s available on the lower right-hand portion of the game screen.

The Bonus Bet is a key component of this online slot. When you activate it, your bet size doubles from 20 coins to 40 coins. However, in exchange for that, you get some serious improvements on the feature set.

With the Bonus Bet active, you get the following:

This increases the volatility of the game a bit, but it also improves your RTP percentage, so you’ll actually have better chances of coming out ahead by the end of your sessions with the Bonus Bet activated. Along these lines, we recommend always using it.

Before any re-spins or free spins, you’ll get the Charge-Up feature. The top symbols at the top of the left and right towers in the background will spin to give you opportunities to get different types of additional features to the game mode.

If you get a scatter symbol in this feature for a re-spin, then your feature is upgraded to a full free spins feature instead.

Essentially, the idea here is that you’ll be given a symbol along with an associated feature for that particular symbol. Those features include the following:

The wild symbol cannot be chosen for these features.

Players are given a shot at the charge-up before every single spin in this mode. If you get a scatter in that charge-up symbol spinner, then one free spin is added to your total, and the spinner goes again to determine your feature for the current free spin.

How to Win at Ozzy Osbourne

The main thing to remember in this game is that activating the Bonus Bet will increase your RTP, which increases your chances of winning. It does double the size of the bet size, however, and if that’s a concern, then you should lower the coin size that you’re using to compensate.

It’s also worth noting that you might want to use a somewhat smaller bet size than you usually would in this game anyway. The volatility isn’t low by any means, and when you add the additional volatility of the Bonus Bet, that compounds it even further.

There are four Ozzy symbols that have different colors and that make up the upper tier of the Ozzy Osbourne video slot pay table. The red Ozzy gets you 1,000x for five, which is the same as five wilds, and you can earn 400x for five of the yellow. The green and blue Ozzy’s pay out 300x and 250x for five of a kind combinations, respectively.

From there, you have decorated card suit symbols. The red heart with the raven along with the golden diamond with the skull head gets you 150x for five of either. You can also earn 100x for five of a kind combos of the green club with the cross or the blue spade with the rose.

With the Ozzy Osbourne online slot, players get to rock out to awesome music while getting plenty of different ways to try to win. The symbol spinner charge-up is an atypical feature that drives a lot of the action, and it fits perfectly with the visual motif of the game. Overall, if you like a lot of action and don’t mind a moderately high volatility, then this title will be a good fit.

Which online casinos have Ozzy Osbourne?