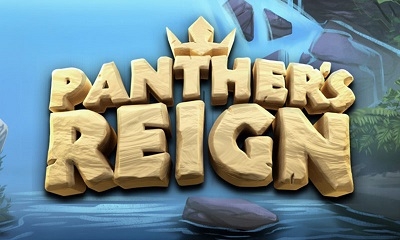 The Panther’s Reign online slot by Quickspin centers around a beautiful jungle theme. The feature set is pretty exciting as well with a free spins mode that gives players extra ways to get paid along with random features that can do things like add a ton of wilds to the game board.

An Introduction to Panther’s Reign

Quickspin is known for producing games of a particularly high quality, so when they put together a title that targets a specific sub-genre of slots that is well-known, then they usually end up standing out from that sub-genre in such a way as to redefine it.

It wouldn’t be unreasonable to say that is exactly what happened with their Panther’s Reign video slot.

This title definitely fits the bill in terms of the jungle-based slot sub-genre, but it’s done so ridiculously well that it transcends that grouping at the same time. The visual appeal is tremendous with a gorgeous background scene along with colorful, vibrant animals on the reels.

They didn’t let the gameplay lag behind the aesthetics in this slot either, and you’ll find that the feature-centric play style paired with a balanced pay table and a strong hit-rate keeps the action fast.

The layout here is conducive to a whole lot of action and a ton of small and medium wins. Here’s what to expect:

The volatility of this game is on the lower end of the medium part of the scale, and having so many ways to win on each turn is a part of that. Along similar lines, all wins are multiples of the total bet size. This simplifies things a bit on the pay table and makes it much more clear how much you stand to win when you pick up specific winning combinations.

The entire concept of the Panther’s Reign online slot centers around the bonus features combined with a reasonably high hit-rate from the regular pay table. This is how the gameplay is created, and the features take a prominent position in the overall experience.

The wild symbols are made really straightforward in this game. You’ll have wilds that appear on each of the five reels, and they can help you to get special winning combinations along the following lines:

As is standard in most video slot, the wilds do not substitute for the scatter in this game.

However, it’s worth noting that some of the features center around giving you more wilds on the reels than you would otherwise normally get, which means that they are a more important part of the overall game experience than you’ll probably think initially.

A good example of the wilds coming into play in a different way is the wild spray feature.

In this feature, you’ll have up to 10 wilds randomly hit on different positions on the reels. Note that if one of these wilds lands over an already existing scatter, then the scatter will still count toward the feature and whatever else.

This feature triggers at random during both the regular game mode and during the free spins bonus round.

The green orb symbol with a stone dragon wrapped around it in gray is the scattered bonus symbol for the Panther’s Reign video slot. These scatters show up on all five reels, and three or more will give you a set of free spins.

During the free spins, you’ll have bonus symbols show up stacked on the reels occasionally, and they can help you to get extra free spins. If you pick up at least three during this feature, you’ll have five free spins added with an additional free turn added to your total for each scatter beyond that. The maximum number you can re-trigger with is 22.

Inside of this free spins mode, you’ll also have a chance to get re-spins that can increase the value of your winning combinations. If you make any winning combination at all, it will trigger the re-spin. All symbols that are a part of a winning combination will lock up, and all other symbols will spin. If you get additional wins, or if you extend existing wins, the feature continues.

One there are no new winning additions, your total payout for that spin will be calculated. This essentially increases the sizes of your average wins, which gives this feature a lot more value than what you’ll get from the regular game mode.

How to Win at Panther’s Reign

The hit-rate in this game is pretty reasonable, but the volatility is still somewhat up in the medium range because of the free spins mode holding so much value and only activating every so often.

We recommend keeping your bet size about average for what you’d be comfortable with in this game in spite of this. If you decrease it, you won’t really gain anything, but if you increase it, you risk increasing the swings past the point of being comfortable as well, so we simply recommend keeping things where they normally are in terms of bet sizing.

The panther is the top-paying symbol with the same wins available as the wild, which includes a €100 payout for five of a kind. The cheetah gets you 25x for five, and that’s the same as the monkey symbol. Five of a kind combinations of the parrot or tree frog will win 15x wins as well.

Keep in mind that all of these pays are multiples of the total bet size, and you can multiply them by 50 if you’d like to know what the equivalent payline-based wins would be. For example, five of the panther or wild would be like a 5,000x payout with a line bet-based system for expressing payouts.

At the lower end of the pay table, things are based around four card suit ranks. The red heart and yellow spade both pay 10x for five of a kind. For the lowest pays in the game, you can win 5x for five of the purple club or blue diamond, but keep in mind that these would be like a 250x win if it was described based on payline wagers, so don’t be discouraged mistakenly by those numbers.

Quickspin wasn’t joking around when they developed the Panther’s Reign online slot machine. The whole idea here is to give players an action-styled experience that fits the jungle theme without just being a copy of other games in the sub-genre. They did an excellent job with this between the graphics and the play style.

It’s also worth noting that the way the paylines are set up gives players a higher hit-rate than the volatility would otherwise suggest. This is a cool tweak that a lot of players will appreciate.

Which online casinos have Panther's Reign?