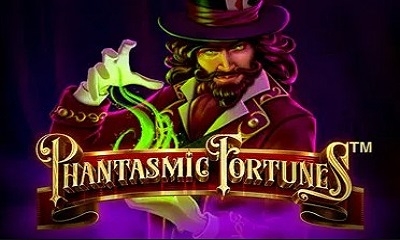 The Phantasmic Fortunes online slot from iSoftBet offers a different style of play with expanding reel sizes. These stay over time until you get a special prize from an orb at the top, at which time they reset. Lots of bonus payouts and a high hit-rate are the hallmarks of this occult-themed video slot.

An Introduction to Phantasmic Fortunes

Online slots seem to cover the same types of themes over and over sometimes. iSoftBet understands this, and they offered something a bit different with their Phantasmic Fortunes video slot. This game is different both in terms of the theme itself but also in terms of the presentation and gameplay.

As a result, this is a title that’s a lot different than most anything else you’ll find in the industry.

The game’s concept has an occult slant to stage magic mixed in with some classic slot imagery. However, it’s a video slot through and through. It’s dark and spooky while offering excitement at the same time.

When it comes to the gameplay, action is the name of the game. Lots of ways to win are always in play, and the game is set up to reward players who stick with it. That’s something you don’t see much. Additionally, the bonus features bring a significant amount of value as well.

The format of this game is straightforward but actually changes over time. This has to do with the way things are set up with the features. Here’s what to expect:

Every win in this game is based on the size of your wager as a whole. This means you don’t have to keep up with your coin size and other pieces of information. Instead, you only need to know how much you’re wagering.

The volatility of this game is in the medium-low range. While the hit-rate is typically above average overall, it can vary a bit as the format of the game varies.

The Phantasmic Fortunes online slot has a pretty cool style of play that you can’t find often. The mechanics that drive this title stand out quite a bit as a result. On top of that, the other features provide plenty of value in addition to the generous pay table.

When you start your game, you’ll be at 243 ways to win. However, if you get the diamond symbol on any given reel, then it will expand that reel vertically by one position.

It’s important to note that this expanded reel position stays in place and doesn’t change after the spin.

For the spins afterward, you’ll get the increased number of ways to win. That number is always shown up in the top-right corner. From there, play continues normally until one of the reels gets up to the highest position. This is when there are six symbols in play on a given reel.

When you hit a diamond on that reel under those conditions, you’ll see it has nowhere to expand to. That’s what the orbs are for floating up above the game. Expanding once more into that orb will activate the feature shown accordingly. It will also reset the size of all reels down to three symbols.

In the regular game mode, you can get instant wins from the orbs that range from 5x to 200x. However, during the free spins, these prizes can increase to be worth up to 1,000x. A few other features can be had as well.

After you get an orb win, you have a random chance to activate the Magic Boost feature. This will increase two of the reels by one spot each after they reset. As a result, you get more ways to win as soon as the reels reset instead of having to wait on diamond symbols to come.

The orbs can activate the free spins bonus round. However, you can also get three scatters across the middle three reels to activate them as well. Something cool is that the scatters take up two positions on the reels, and that makes it easier for them to hit because you only need one half of each symbol to show up.

You start with three symbols on each row. However, diamonds hit more often. You’ll keep going until you hit an orb that has a collect symbol. This will reset the reels and take you back to the main game mode. The orbs will also reset to show new payouts you can pick up.

How to Win at Phantasmic Fortunes

The thing to understand about the Phantasmic Fortunes video slot is that you won’t get the full value if you don’t stick around for a while. This is because the orbs carry so much value, but you need to play for a bit to get them.

The volatility is below average in this game, so you don’t need to worry about lowering your bet size. Instead, picking a bet size that you’re typically comfortable with and planning on sticking with this game is probably the best strategy you can use.

The hat symbol pays out 5x in this game for five of a kind. Note that you’ll often get multiple of these payouts at once, so don’t let the size of the wins fool you. The cards and potions pay 2.5x or 2x each for five of a kind. Five of the watch or raven will earn 1.5x or 1x as well.

Four card suit symbols round out the bottom end of things. They look absolutely gorgeous as well. You can pick up 0.6x for five of the red heart or black spade. However, wins of 0.5x can be yours if you line up five of a kind of the red diamonds or black clubs.

These payouts are pretty balanced but still offer chances for some significant wins. That’s the type of thing that we like to see with pay tables in online slots with a high hit-rate.

The action is definitely driven up by the great amount to which the aesthetic appeal is suited for the video slot’s theme. As part of this software developer’s portfolio overall, this is a video slot that holds an important job since it is a strong fit to so many players, and the overall concept is utilized in a really smart way in this video slot, which is different than it only being an afterthought like what we see in a lot titles.

The gameplay experience with this video slot offers a ton of excitement. It’s also worth noting that the hit frequency of the range of features in this title is so serious that you will be sure to not get tired of playing.