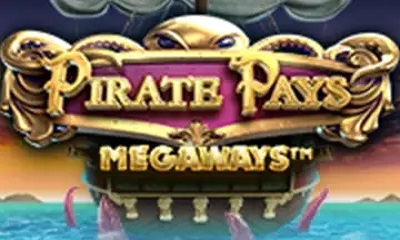 The Pirate Pays Megaways online slot from Big Time Gaming takes players out onto the high seas. This gives you an opportunity to score on thousands of ways to win on each spin. Additionally, a free spins mode is available where you can eliminate tons of options before landing on the one you choose.

An Introduction to Pirate Pays Megaways

Fresh game mechanics aren’t something we get all that often in the online slot world. Most of the time, what passes as “new” is simply a new paint job on a tired concept. However, the Pirate Pays Megaways video slot bucks this trend and shows something truly different.

This is one of the main reasons why this game stands out so much.

From a game mechanic standpoint, the features are really interesting. They offer an exciting style of play that breaks away from what’s considered the usual. However, they don’t stray so far outside of the box that it’s alienating to players. Big Time Gaming definitely struck a solid balance on this point, and we appreciate how they also created balance between the serious value of the bonus features and the high hit-rate of the regular game mode.

Visually, this is a slot that exceeds all expectations. You’ll play on reels that are on a large ship out on the open sea. Wonderful flowing animated water covers the bottom third or so of the screen. However, the rest is a beautiful sky out over the ocean with a bit of mountains in the distance. Seagulls fly overhead at the same time, and the ship itself looks great. The overall aesthetic of the symbols on the reels rounds out a great presentation.

The layout of this title is a big part of how the gameplay is set up. This is because it uses a Megaways form that gives thousands of ways to win on each spin. We’ll break down how it works here exactly so that you know precisely what to expect.

Because this title has such an atypical betting setup, the winnings and payouts are simplified. BTG did this by way of making them all simply a multiple of the total amount bet. For example, a player making a €2 wager with a 30x payout will win a prize worth €60.

The volatility level in this game is in the medium-low range. A big part of that is the high hit-rate. However, some of it also comes from how balanced the overall pay schedule is, including wins from features.

One of the things we really love about the Pirate Pays Megaways online slot is that everything is geared toward action, and you can see that in every aspect of the title from the format to the way the features are set up. With so much action, it can seem a little intimidating to try to keep up with it all at first. However, we will be breaking down everything below so that you can start off knowing what to expect.

Of all of the features in this game, the Reactions Feature is most likely to be the first you see. This is because it’s a feature that triggers on every single win you get in the game.

When you pick up a win, it’s paid out as usual. However, after it’s paid, you’ll have all of the winning symbols disappear. This creates empty space, and in turn, new symbols fall down. These new symbols fill the game board up where the missing symbols were located, and you get another chance to pick up wins at no additional cost.

What’s more is that this feature can happen over and over again on the same paid turn. However, once no new wins are available, the feature is over.

The Pirate Pays Megaways video slot uses a wild mechanic we can’t remember having ever seen. Additionally, this mechanic fits in perfectly with the motif of the game itself. This is why we think it’s so cool and stands out in the industry as a whole.

The wild symbol in this game is a golden compass. When you hit it, it triggers a wild expansion in a random direction.

This golden compass only lands in the extra reel that runs under the game board. However, when it does, you’ll have a random direction chosen. Wild bird symbols will expand to cover all available spaces in that direction as a result. Within the context of the Megaways format, this can lead to a lot of extra wins for obvious reasons.

The scatters in this game are chests full of gold. Three or more will activate the Kraken free spins bonus round. However, one of these chests appears as purple on the sixth reel only. If that purple chest is one of the chests used to activate the feature, then you’ll get an enhanced version instead.

When this feature starts, a long list of different multipliers with numbers of free spins are shown. The more scatters you get, the more are initially removed from the bottom end of the selection of 20. From there, a number of options will randomly be removed, and you’ll be given one as an option from what’s remaining.

If you accept it, you go straight into the bonus mode. However, if you decline, more are removed, and the process continues. This keeps going until you either accept an option or the game runs out of options to give you. However, you’ll simply be given the last option shown in the latter scenario.

Additionally, having triggered the enhanced version of the free spins mode has a simple effect. All 10 of the lowest free spins options start out removed from the selection. That puts you in a great position to get a lot of free spins with tremendous multipliers.

How to Win at Pirate Pays Megaways

With the below-average volatility, all you really have to do with your betting is pretty straightforward. Start with a bet size around what you’d be comfortable with on average at first. This will give you a chance to get familiar with the game mechanics.

However, from there, you have a betting adjustment option. You can increase your bet size slightly, by about 25 to 33 percent, if you’re so inclined. The hit-rate combined with the lower volatility will smooth things out for you for the most part. However, you’ll still get larger wins on average due to the bet size increase.

The highest regular payouts in this game by far come from the purple and gold gem. It pays 25x for six of a kind, and it’s the only symbol to pay out for just two of a kind. However, you can also score wins of 0.9x, 0.8x and 0.7x for six of a kind of the red, blue or green gems surrounded in gold frames, respectively.

From there, things drop down to the lower tier of payouts. The purple A and red K symbols get you 0.6x for six. Additionally, wins of 0.5x are yours for six of the blue Q and green J. Finally, six of a kind combinations of the yellow 10 or cyan 9 are worth 0.4x as well.

The aesthetic appeal of this game is top-tier and boosts the whole gameplay style. In addition to that, as a result of the wide attraction from a lot players, this slot has a perfect spot in this software developer’s offering of slots overall.

In comparison to other online slots that utilize related concepts, this title stands out in a handful areas compared to just being like everything else, and what slot fans will absolutely love with this game is the value that the selection of features add to your bottom line. On top of that, the play style in this slot offers a whole lot of excitement.

What is the Return to Player (RTP) for Pirate Pays Megaways?