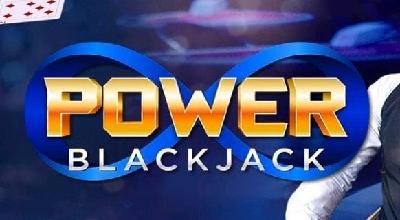 Evolution Gaming’s Power Blackjack Live game offers players a chance to triple or quadruple their hands instead of just doubling while also offering four different exciting side bets within their Infinity Blackjack format. This means no worrying about looking for empty seats since you can always play at this game.

An Introduction to Power Blackjack Live

The number of blackjack variations out there in general is pretty tremendous, and there are easily dozens of distinctly different styles of the game. The Power Blackjack live dealer game is another one of those, exclusively available from Evolution Gaming in a live game format. It has some special rules and extra side bets that make the game particularly exciting.

The main rule change compared to other games is that you can triple or quadruple your bet for one extra card instead of only doubling.

Savvy blackjack fans will know that this rule change by itself would increase the payout rate for the player quite a bit, so there has to be some other rule change that makes the game a little bit harder. That comes in the form of the game having an atypically sized deck, which we’ll get into down below.

If you like big wager multipliers and lots of action with several popular side bets, then this is a blackjack game that you will not want to miss.

The way this game is set up is a little different than what you’ll find from other blackjack games, no matter if they’re live dealer-based or use a more traditional online format. As a result, it’s more important than usual for players to know what they’re getting into before they sit down to play.

There are a number of parameters and basic rules for this game that players will want to know whether they are new to the genre or they are blackjack veterans.

There are also four side bets that we’ll cover in a section down below.

Unlike many other live dealer blackjack games, you will not have to reserve a given spot at the table and play that spot’s hand only. Instead, only one hand is dealt, and players will decide how to play with that one hand themselves. Each possibility is dealt out after players have made their decisions so that you can see how each possibility would have played.

That leads to the following gameplay procedure.

We also have the following betting options:

Side Bets in Power Blackjack

There are four different side bets available in this game. They each have their own pros and cons and ways of being resolved. If you like extra action, they are definitely something to check out.

Bust It Side Bet

The idea behind the bust it side bet is that you’re betting that the dealer will bust, and you’ll receive payouts based on how many cards the dealer has if he or her does bust out.

The pay table for the Bust It side bet in the Power Blackjack live dealer game is as follows:

You get to root for the dealer to pick up more cards with this side bet, which makes it very engaging and particularly popular.

The 21+3 side bet adds a bit of three-card poker action to this game. This is set up by using the player’s two cards and the dealer’s up-card to create a three-card poker hand that is then paid out based on the following pay table:

Any Pair Side Bet

This is probably the most simple side bet in the live dealer Power Blackjack game. You can get a payout if your two starting cards are of the same rank with the following prizes:

There’s not much else to this one.

The Hot 3 side bet adds up the sum of the two player cards with the dealer’s up card to score wins based on a straightforward pay table. The cards are scored the same as in blackjack, so you can use aces to count as 1 or 11 points, whichever will give you the best potential win.

The top payout with three sevens is fun here and is the main attraction for the side bet as a whole.

How to Win at Power Blackjack Live

There are some serious strategic differences for Power Blackjack that you don’t necessarily see in other games, and that makes it stand out in a very serious way from a strategic standpoint.

First off, you do not have any 9s or 10s in the deck, which shifts the house edge in favor of the house significantly. A big part of this is that doubling (or in this case, tripling and quadrupling) opportunities are of a lower value on average, so you have to look for bigger edges to increase your bet size in this way.

The extra option to triple or quadruple in addition to doubling adds an interesting twist to things. From a strategic perspective, you should actually never double or triple. Quadrupling or playing normally should be your only options with good hands, and that will typically happen with a strong total against a weak dealer card (3-6).

As far as blackjack variations go, particularly in the live dealer space, it’s hard to find one that has more strategic differences than normal than what you see in Power Blackjack Live. It’s a super-solid game with a lot of action from the quadruple option and four different side bets. If action is what you’re looking for, then this is probably the best live dealer blackjack table game that you’ll find out there because of all of these extra ways to get paid.