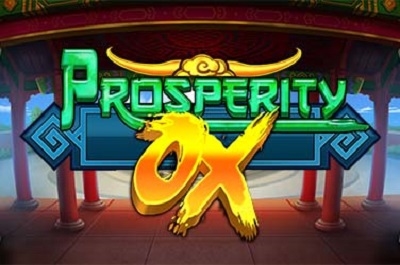 With the Prosperity Ox video slot by iSoftBet, the entire game from the format to the feature set is designed around giving a high hit-rate and plenty of wins. The features are atypical as well, which gives this slot a unique flavor compared to many others in similar sub-genres.

An Introduction to Prosperity Ox

The theme of the Prosperity Ox online slot is centered around the idea of a silver ox that brings people tons of wealth, fortune and good luck. This is paired up with a variety of other Asian-themed concepts and visuals.

The ox in particular is very important in this game because it’s the highest-paying symbol, and there are separate regular paying symbols and scattered ox symbols that give different rewards.

The aesthetics of this title are outstanding. Every single symbol has been crafted in a way that it brings out a ton of character in the symbols themselves, which gives the game an immediate amount of depth that you don’t see from a majority of other games.

Moreover, the feature set and the way that the gameplay is set up gives players a whole lot to get excited about while they’re playing. The balanced pay table is paired with generous features to keep the pace at a level that you’ll never have a boring session.

This game is larger than the vast majority of video slots, and that is tied into the it awards payouts and how the features work. Here’s what to expect:

Volatility is an important thing to know about in any online slot. In the Prosperity Ox video slot, you’ll have a volatility in the medium to low range. This is achieved with a balanced pay table with a whole lot of small and medium wins combined with a high hit-rate from the wilds and the 4,096 ways to get paid. This means that your swings will be particularly reasonable and easy to manage in the majority of your sessions.

The gameplay has been made the real focus of this title by iSoftBet in spite of the fact that the game looks so good. We’ll give you an overview of everything you should expect from the features and general flow of the game here.

Note that all wins will be described as coin-based win amounts. Your total payout will be the wins listed here multiplied by your individual coin value.

The red and gold double doors symbol acts as the wild in this game. It’s particularly effective because this is an “all ways” format title, and that’s made even more the case with there being a 6×4 grid with 4,096 ways to win used.

The wilds show up on the second, third, fourth and fifth reels. Another way to think about this is that it’s for the four reels in the center with the first and last reels excluded. It doesn’t get its own winning combinations here, but it’ll help you to get a ton of extra wins otherwise.

The scattered ox symbol has a golden ox head on green circular disc pattern. This is the scattered bonus symbol for the Prosperity Ox online slot, and it’ll award the following:

When you’re in the free spins mode, there are a few things that are different than the normal game mode. First off, you’ll have all of your wilds randomly turn into wild multipliers worth either 2x or 3x. These combine by multiplying by each other, so if you end up with one of each in matching combinations, one 2x and one 3x, then they would combine for a total 6x multiplier for example.

Additionally, there’s a special setup for how the ox symbols work. They become gold instead of silver, and they pay from left to right ignoring gaps in the reels. This means that they can pay no matter which reels they’re on, and that includes wilds that can be used as ox symbols as part of the combinations.

Finally, you can re-trigger the free spins by getting more scatters on the game board. The number of free spins you get is the same as the listing above for initially triggering the feature, but there’s an addition where you can get an extra five free turns just for two scatters anywhere on the grid.

How to Win at Prosperity Ox

The Prosperity Ox online slot is designed to have a high hit-rate with a low volatility and a lot of small and medium wins. The bigger wins come from the multipliers in the free spins bonus round, which is less likely to happen, which in turn keeps the volatility low.

One adjustment you can make is to kick your bet size up to about 150 to 200 percent of its normal size. This will keep your volatility reasonable while increasing the size of the bigger wins you get in the process.

The silver ox symbol gets you 150x for six of a kind, and it’s the only symbol in this game that will pay for just two of a kind. Six of the golden turtle or golden koi will earn players 125x. The pay table continues to have a smooth drop down to the 100x level for six of a kind combinations of the golden choices or set of oranges.

You’ll have three tiers of payouts for the card rank symbols. The A, K and Q all pay 75x for six. Six of the J symbol earns players a win of 60x as well. From there, you can pick up 50x payouts for six of a kind of the red 10 or the green 9.

With the Prosperity Ox video slot, there’s a lot going on to keep up with. Here are the pros of this game as we see them:

With that having been said, there are some things that not everyone may like about this game:

Overall, this is the type of game that will appeal to the majority of players. There are small issues that some players will have some of the time with the pay distribution, that’s a matter of the fact that not all titles can cater to everyone in every individual niche.