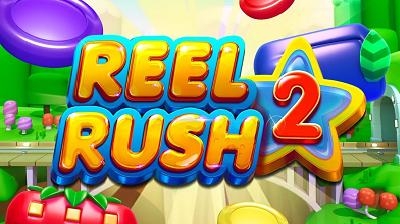 The Reel Rush 2 online slot by Net Entertainment is jam-packed with features and centers around having up to 1,875 ways to win in the base game. This is a title with a relatively high volatility in the upper end of the medium part of the spectrum, and it’s driven by a tremendous amount of action and excitement.

An Introduction to Reel Rush 2

NetEnt is a company known for producing some pretty high-quality games, and some of their most popular titles are based around themes or big brands from other forms of media like movies or television shows. On the other hand, they also produce some particularly strong titles that are not based on any known brand at all, and their Reel Rush series is a good example of that.

Reel Rush 2 is a part of this series, and it really shows what they are all about on the gameplay side instead of relying so much on an already-existing brand to keep the attention of players.

Visually, this game has a great look with some fruit, some gumdrops and other symbols, and the cute, 3-D landscape behind the reels is fun as well. On the gameplay side, it’s heavily feature-oriented, and the format is different enough to add to the excitement without being too far outside of the box.

The layout for this game is an important part of the overall action. In the Reel Rush 2 video slot, it can change due to some of the features, but the following is how it starts off in the regular game mode:

The volatility of this game is in the medium-high range. There are some aspects of the title that keep the volatility from being even higher, and the balanced pay table is a part of that, but it’s important to note that the volatility is higher than most other games with a similar type of theme, so don’t be caught off guard.

There are a ton of features in this game to the point that it can be easy to get some of them mixed up. We’re going to cover them the best way we can to keep them separate in the minds of our readers so that you can really understand the full range of possibilities available when you sit down to play the Reel Rush 2 online slot.

There are no special payouts just for combinations of wild symbols because you can’t make those combinations exclusively. This is because the wilds appear on the second, third, fourth and fifth reels only.

These symbols appear on these four reels in every game mode, however. Paired with the all-ways format, they provide a lot of value even without showing up on the very first reel.

There are several random features that can happen on any given spin. We’re going to go through them here, but keep in mind that this isn’t all that there is to be had in terms of features:

This is obviously a lot to keep up with, but since they happen at random and don’t require you to actually remember or do anything, you won’t miss out on anything important if you don’t remember them all at all times.

If you get any winning combination, then you’ll activate a re-spin. You can get up to five re-spins in a row with consecutive wins, and the number of ways to win changes based on parts of the game board opening up for each consecutive re-spin. On each re-spin, here’s what you get:

This is obviously the source of a lot of value in this game.

Each time you unlock blocks with the random features, you’ll add a star to the free spins meter on the right-hand side of the game board. Fill up the meter to activate a free spins mode.

You’ll go into regular free spins or super free spins depending on how many super tokens you have accumulated as well.

How to Win at Reel Rush 2

Because so much value in this game is based on the accumulation of points and tokens over time, you want to plan on playing this title frequently (since your progress is saved between sessions). You don’t want to really just try this game for a short time and then jump around to something else.

With the need for longer sessions (and more consistent sessions), and combining that with the medium-high volatility that this title has to offer, we recommend keeping a bet size that’s a good bit smaller than you normally would use so that you shield yourself from the inevitable swings that come with playing a game like this so much.

Five small candy symbols that look like round discs make up the bottom end of the pay table. The red and orange ones can pay out 12x for five of a kind combinations. Likewise, you can win 10x for five of the yellow, green or purple.

The main thing to keep in mind about the Reel Rush 2 video slot is that NetEnt has designed this game to give players an almost overwhelming amount of action. It’s a great title with a lot of ways to win and a lot of random features that include aspects that accumulate over time to give you more value. This makes it a rare game that pays out more over time than it does over the short run.