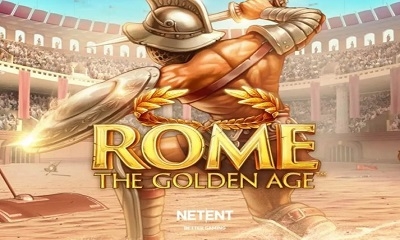 Net Entertainment’s Rome: The Golden Age online slot is all about going back to ancient times. You’ll have a gorgeous experience ahead of you along with lots of features. The pay table for this game is very balanced with a high hit-rate for a ton of action.

Casinos with Rome: The Golden Age

An Introduction to Rome: The Golden Age

There’s no shortage of online slots that are based around Roman themes. However, most of them fail to capture anything outside of the military side of things. That’s one reason why we really enjoy the Rome: The Golden Age video slot:

There’s a lot more on display here than the combat and military themes that you normally see.

The architecture is a good example of what we mean. You’ll see gorgeous work in the background and beside of the reels in this title. The symbols are crafted in a way that look amazing as well, and it just creates a very aesthetically pleasing situation overall.

From there, the gameplay is also top-notch. It’s a slot with a good mix of value that comes from the regular pay table and the feature set. This means that your wins will come from multiple sources, which always makes things more exciting.

We think that most players will notice the atypical format right away. It’s not a rectangular layout like most individuals will be used to. However, it’s really easy to get the hang of things after a couple of spins. Here’s what to expect:

All of the wins that we talk about in the following are going to be multiplied by the bet size. If you want to know what the line bet style of describing wins would be, that’s okay. All you have to do is multiply the amounts we’re going to give by a factor of 10.

We also want to point out that this game has a medium-low level of volatility. The swings won’t be super severe, but there will be some noticeable swings somewhat regularly.

As we mentioned above, the Rome: The Golden Age online slot has a mixed style of play. A significant portion of the value in this game comes from both the regular pay table and the feature set, so you’ll want to know how the features work and what’s available before you really jump in and get started.

The wild symbols in this game take advantage of the atypical grid style used. The Golden Age symbol kicks things off when it lands on a position. That position is then marked with a special frame. From there, it can randomly turn into a Rome symbol instead. If so, that frame becomes what this game calls an active frame.

Here’s the thing to know: The Rome symbol turns wild on the following spin. From there, if any adjacent positions have frames, they will also turn wild. This can create a chain reaction of wilds that really drive up the value of your spin. Note also that these frames do not go away until they turn into wilds. They also reset when a free spins bonus round begins.

These wilds will substitute for all of the regular symbols in the game. However, that doesn’t include the scatters, the Rome symbols or the Golden Age symbols. Note also that there is a special win of 5x for five of a kind of the wild symbols on a payline. Otherwise, they will count as the regular symbol that gives the best win. These best wins are determined on a payline by payline basis. That means that a single wild can substitute for different symbols for different paylines.

In the top-left corner of the game board, you’ll notice a counter that reads “0/200.” This is under a golden age symbol, and it acts as a counter. When a Golden Age symbol lands on the game board in a position that does not have a frame, it adds one to this counter, which is displayed as a progress bar across the top of the screen.

However, if it lands in a position that already has a frame, you can get more points. A random number from one to four is determined, and that’s how many points you get.

When you hit 200 points, your free spins multiplier for the next time you trigger the free spins increases. It starts at 1x and goes to 2x, 3x, 5x, 7x, 10x and on up in various increments. You can actually get it as high as 1,000x if you go long enough without a free spins mode.

We like how this essentially takes a lot of the variance out of the free spins bonus feature. If you go longer without triggering it, then you’ll have a higher multiplier once you get there. That means it all evens out in the long run a bit.

The free spins mode for the Rome: The Golden Age video slot is a bit different than what’s typical. If you get scatters on the middle three reels, you start with three free spins. Every spot on the reel starts empty, and only Rome symbols show up on the game board.

The positions with frames allow symbols to become locked, and you’ll get random prizes for Rome symbols landing in these positions. It also starts the free spins counter over to three. When your feature is over and you run out of free spins, your win is calculated. This is the total of the individual prizes given on the board multiplied by your multipliers found above.

However, you can get an additional 2x multiplier on all of your payouts. This happens if you completely fill the game board with Rome symbols that have locked into place.

How to Win at Rome: The Golden Age

What you’re after in this game is keeping the volatility in line with your chosen bet size. Since the volatility is in the medium-low range, the common adjustment is a small increase. By boosting your bet size slightly above what you’d normally wage, you get an edge. That edge is based on picking up bigger wins than usual while still protecting yourself from swings.

An increase of about 25 to 50 percent is plenty. If you go above that, then you’ll subject yourself to swings that are too large.

A number of the symbols found on the reels do have military themes here. However, that’s not most of them. Instead, the top regular symbol is a tiger on a red background. He pays out 5x for five of a kind, the same as the wilds. From there, two different symbols pay out 2.5x for five. Those are the golden bird and ring symbols. The golden helmet is also worth 1.2x for five on a line along with the crossed swords.

Five card rank symbols balance things out. The red A and orange K pay 0.9x for five, and you can earn 0.6x for five of the yellow Q or green J. With the blue 10, you’re paid 0.4x for five of a kind combinations.

The driving Roman concept is used in a particularly intelligent way in the Rome: The Golden Age online slot, as opposed to it just being an afterthought like what we see in the majority of slots. If fun is what you’re needing in your sessions, then you’ll 100 percent love the style of gameplay that this slot offers to the table, and due to the large attraction from a whole lot of people, this video slot has a valuable position in this developer’s offering of online slots as a whole.

The pay rate of the features in this slot is serious enough that slot players will be sure to not get bored. On top of that, we also like how the level of graphics gives video slot fans a more immersive style of play as opposed to only being an unimportant part of the slot.