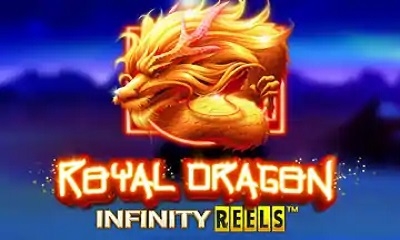 Reelplay’s Royal Dragon Infinity Reels online slot offers a different kind of experience. It has an Asian-style dragon theme, but it also brings some very intense gameplay. While it may not look like it on the surface, this title has more action than most of what’s available online.

Sometimes we take for granted that we have the style of payouts for slots that we do. The Royal Dragon Infinity Reels video slot is sure to take some of that away because it’s something fresh and different from a fundamental level.

There is literally no limit to the size of wins that you can pick up in this title.

The gameplay is definitely where most people will focus their attention for this title. While we’ll get into the details of the layout and format below, know it’s pretty serious. There’s a lot going on, and the feature set just adds even more to that.

Visually, this is a pretty solid game as well. Reelplay isn’t known for making games that are at the tippy top tier for graphics. However, they are very consistent about having graphics that are at least above-average. Again, that’s what you get here. The visual appeal is definitely up there and better than most. With that said, don’t expect it to compete with the absolute best out there. There’s nothing wrong with that, especially with the gameplay being so good.

The layout is obviously going to be a big part of this game. It’s far enough outside of the box to be exciting and interesting. However, it’s not so far out there that players won’t be able to sit down and just play. Here’s what to expect:

The volatility of this game is actually pretty tame. That’s because the way the wins are calculated keeps a lot of small and medium wins in the game. This lends itself to an above-average hit-rate and a below-average volatility.

The gameplay for the Royal Dragon Infinity Reels online slot is pretty fast-paced. With the way everything is set up, there’s a lot of action happening throughout your sessions. Here we’ll break down how the payouts work and how the features come up. We’ll have everything you need to know before you get started in what follows.

With an infinity number of potential reels, this game needs a different way of handling payouts. Otherwise, the number of possibilities couldn’t fit on a standard pay table.

The first thing to know is that each symbol has a base value attached to it. The base win is determines by this value multiplied by the number of symbols in the winning combination. However, this is furthered by the symbol multiplier.

The symbol multiplier starts at one. For each additional reel added to the game, it increases by one. This is multiplied by your final win, which gives you plenty of opportunities to get serious payouts.

The golden dragon symbol is wild in the Royal Dragon Infinity Reels video slot. It also appears stacked pretty frequently. This leads to situations of getting lots of compounding multi-way wins.

This wild dragon does not get its own payouts. The payouts are always based on what it’s substituting for via other symbols. It also cannot substitute for the scattered gong symbol.

The gongs require five to show up on the game board to do anything. However, they can give you both payouts and free spins. The base payout for the gongs will be 1x per symbol. However, keep the reel multiplier in mind since it has to be activated to have enough reels for there to be five gongs.

During the regular game mode (not the free spins), you can randomly activate the Frenzy Spin feature. You are essentially given a random multiplier on your total win. This can range from 2x to 5x.

This is applied to the entire win. That means it includes the reel multipliers and everything else. It’s a great feature that adds a tremendous amount of value to the game.

If you’re able to get 12 reels or more, you’ll activate the Infinity Bonus. This is about as straightforward as a feature as you can get. A 200x win is simply added to your payout for the spin. While the reel multipliers do not apply to it, the Frenzy Spin multipliers do. That means the Infinity Bonus can be as much as 1,000x if you were to pick up the 5x Frenzy Spin multiplier at the same time.

How to Win at Royal Dragon Infinity Reels

With the volatility being slightly below-average, we would normally recommend picking a bet size slightly higher than your average for the Royal Dragon Infinity Reels online slot. However, here we’re going to go with something a little different. We’re going to recommend that you actually keep your wager at about the average you’re comfortable with.

We say this because the format is a bit different and can throw players off sometimes. With that said, once you’re used to how the flow of the game works, you’re obviously free to wager whatever you like.

When discussing the payout structure, we want to talk about the base values for the symbols. The golden bird and golden lion pay 8x and 5x each, respectively. From there, we have the koi fish and green frog that are worth 4x and 3x.

The lantern and lotus drop things down to 2x each. That leaves the green diamond, red heart, golden club and blue spade symbols. All four of the card suit symbols have a 1x base pay.

We really like how the visual appeal of the Royal Dragon Infinity Reels video slot gives slot fans a more cohesive style of gameplay contrasted to only being a formality. As if that wasn’t enough, as a part of this company’s portfolio overall, this is a slot that holds an important position since it has appeal to a whole lot of players.

The hit frequency of the features in this video slot is so big that slot players will definitely not get bored of it, and if you have enjoyed other slots that center around this type of overall concept, then this is one slot you will not want to miss playing. It’s also worth noting that the gameplay is overwhelmingly focused on action with a tremendous amount of ways to come out on top.