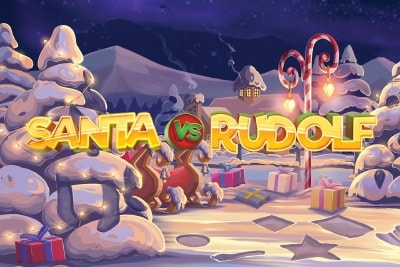 Net Entertainment’s spin on a Christmas-themed slot in the form of Santa vs Rudolf is a title that has a tremendous number of features that largely center around a conflict between Santa Claus and the leader of his reindeer who pull his sleigh. This is a humorous and in-depth online slot with a feature set that’s up there with the best that the industry has to offer.

Casinos with Santa vs Rudolf

An Introduction to Santa vs Rudolf

There’s no doubt that you can find a lot of Christmas-themed online slots. However, Net Entertainment is known for putting their own personal spin on things, and that’s what you get with the Santa vs Rudolf online slot.

This game is about a fight between Santa and Rudolf, and the players are the real winners because this conflict leads to all kinds of wins and features.

Everything in this game looks great in terms of the animation. You have a wintery wonderland in the background with Santa on one side and Rudolf on the other, squaring off under a roof with presents scattered around. It’s a bright and colorful slot along these lines.

With the gameplay, you’re getting an intense look at what a slot title can be like if it’s jam-packed with features, and that’s a style of play that most players will be able to fall in with and really enjoy.

The betting and format for this game are pretty straightforward and easy to follow. Here’s what you can expect:

There are a few other things that you’ll want to know about the betting here. First, all wins that we list here are based on a multiple of how much you’re betting in total, so a 5x win means that you pick up a payout worth five times your initial bet size.

Second, the volatility of this game is in the medium range even though the hit-rate is pretty good. That’s because a fairly significant amount of value is tied up in the bonus features. They hit often enough, but it’s something to be aware of when you’re picking your bet sizes.

Everything in this title is set up around the idea of the fight between Santa and the head reindeer, and that’s why the Santa vs Rudolf online slot has the name that it does. As you’ll see in the following, the entire feature set is centered around this concept.

There are two wild symbols in this game, but you won’t get any payouts for just having combinations of wilds. This is because they appear on the first and last reels only.

The Rudolf wild always shows up on the first reel, and the Santa wild only makes his initial appearance on the fifth reel.

With that said, they can move across the reels with the re-spin feature.

When you get wilds on the game board, you’ll activate the re-spin feature. This will have the Rudolf wilds move one spot to the right while the Santa wilds move one spot to the left. The rest of the symbols will spin to give you extra opportunities to get paid until all of the wilds have left the reels. Note that you can pick up more wilds to extend the feature as it goes.

If the Rudolf and Santa symbols run into each other during the re-spin feature, then you’ll activate a set of 10 free spins. Note that you can add more free spins to this total for running the wilds together over and over, and that’s up to a total of 30 free spins at a time.

During the free spins bonus feature, the wilds can show up anywhere on the game board.

You’ll see two meters at the top of the reels during the free spins mode, and one of them is for the Santa’s Gifts feature while the other is for Rudolf Spins. They correspond to the features listed below.

When you get Santas or Rudolfs moving off of the reels, they fill spots on their respective meters over the game board. When one of those meters fills, it gives you an extra bonus round when your free spins are over.

For the Rudolf Spins feature, you’ll get three extra free spins with five random Rudolf wild symbols added to the game board. These five wilds will move around randomly during this spins. What’s more is that payouts go in both directions during this feature to give you twice the ways to get paid.

For Santa’s Gifts, you’ll have three different items sets shown on the Santa vs Rudolf video slot game board, and you get to pick three of them for prizes. You can win random coin payouts or multiplier increases. You get spin for each pick until you get the Santa hat, which ends the bonus feature, and your multipliers will apply to winnings for each spin during the feature up to a maximum of 4x.

How to Win at Santa vs Rudolf

The best way to win at this game is to just play normally. The more spins you get in, the more likely you are to hit the bonus features, which is where you can get an abundance of value. Along these lines, you could choose the autoplay feature to get in more spins per session than what you normally would, but that’s not everyone’s cup of tea.

Some people like to use a slightly smaller bet size to compensate for the faster spin rate, and you can end up wagering about the same amount of session along these lines.

Payout Structure for Santa vs Rudolf

The payout table for this game uses a pretty flat distribution to keep the volatility as reasonable as possible. At the upper end, things start with five of a kind wins for the sleigh symbol, which gives you 25x. You can pick up 20x for five of the bag of gifts or 15x for five of the reindeer collar. From there, a 10x payout is yours for five of a kind combinations of the snow

globe with a reindeer in it, and you can win 7.5x for five of a letter to Santa.

Notice how these top pays step down gradually to keep things pretty balanced on the pay table as a whole.

At the lower end, you have card rank symbols that are stylized as candy canes, which obviously fits the theme really well. From the A down to the 10 symbol, wins vary from 5x down to 3x for five of a kind combinations.

Net Entertainment’s Santa vs Rudolf video slot brings together a high-action style of play based on features with a fun wintery wonderland theme. As a result, you get a type of experience that’s a lot of fun with a lot of bright and vibrant colors, and we feel like that’s something that will appeal to the majority of players a majority of the time.

Which online casinos have Santa vs Rudolf?