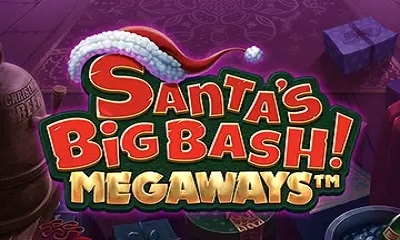 The Santa’s Big Bash Megaways online slot from Iron Dog Studio takes players by the fire waiting for Santa to come down the chimney. With thousands of ways to win on most spins and a free spins mode with changing multipliers, the action is serious as you look for presents for your bankroll.

Over the years, the holiday-themed online slots have gotten better and better. Proof of that can be found in the Santa’s Big Bash Megaways video slot. Produced by Iron Dog Studio, it has a tremendous presentation and a high-action style of play.

Even if you don’t care for the holidays, you’ll have a lot to look forward to in this game.

The first thing we want to mention is the aesthetic aspect of this game. The style of drawing is top-notch, and the whole thing simply looks great. From the fire going in the background to the tree to the right and the symbols on the reels, a high level of attention to detail has obviously been paid to every single aspect of this title.

And that’s before we even get into the gameplay elements. Using a Megaways-style format, the action is serious from the very beginning. However, it’s not a situation where they just rely on the basic layout for excitement. Instead, several types of features are found in this game as well. They keep things pushing along in an exciting way, and while some of them are a bit different than the usual, they all fold into the holiday theme really well. As a result, you get a cohesive bond between the gameplay and the theme and presentation of the slot.

A number of variations exist on the Megaways style that was made popular by Big Time Gaming. In fact, Iron Dog Studio licensed the name and format for this title. However, they used one of the more simple and high-action approaches to using this style. Here’s what to expect:

Something important to realize in this game is that the hit-rate is well above-average. When you combine that with the balanced pay table overall, you end up with a medium-low volatility. As such, the play style is pretty much in line with what the majority of players like. You’ll get frequent hits in the small and medium range. However, this helps to keep your account balance afloat while you shoot for bigger wins.

Additionally, wins in this title are not based on coin amounts. Instead, they’re based on the total amount wagered. For example, a 30x win with a €2 bet size leads to a payout worth €60.

With the Santa’s Big Bash Megaways online slot, the gameplay is largely feature-based outside of the Megaways payouts. The feature set meshes with the format really well to keep the action up, however. In what follows, we’ll go through each important feature and give you an idea of what to expect.

The wild symbols in this game are presents. They’re wrapped up and ready to give you payouts you would have missed without their help. These wilds appear on the second, third, fourth, fifth and sixth reels only. However, since they do not show up on the first reel, you can’t get winning combinations of only wilds.

You should note that the wilds will substitute for everything in this game other than the magic bauble symbols. That’s because those are special bonus symbols, which we’ll get into down below.

A tumble feature is active in the Santa’s Big Bash Megaways video slot. The way this works is really straightforward. All wins are calculated and paid when they happen. However, from there, they are destroyed and create empty space. In that empty space, you’ll have new symbols fall down from above to fill up the reels.

Once the reels are filled back up, you get another chance to hit winning combinations. If you do, the tumble feature triggers once again. These tumbles come over and over until you have a situation with no new wins. When you get to that point, the turn is over.

Rudie the red-nosed reindeer can show up at random to trigger different features. These features help you to have better chances for wins, and they can include the following:

Magic baubles, the ball-shaped decorations that go on the tree, can be found on the reels. If you get at least eight on a given spin and set of tumbles, you’ll trigger free spins. The number of free spins you get is determined by how many baubles you use to start the feature. However, you can also get starting multipliers that are different along the following lines:

In the free spins mode, you get an extra multiplier when you get a reel with seven symbols. What’s more is that this reel will remain at seven symbols for the rest of the feature. The idea is that you get more ways to win with so many symbols on given reels like this.

How to Win at Santa’s Big Bash Megaways

As you can see from all of the features and how they combine, the hit-rate is pretty high in this title. That’s on top of the fact that the Megaways format adds a lot of ways to win as well. In short, you’ll have a high hit-rate with a balanced pay table. This leads to a medium-low volatility overall.

The traditional adjustment to make when volatility is lower than average is to slightly increase your bet size. If you go that route here, what you should look for is an increase in the range of 25 to 33 percent at the most. The idea is to take advantage of the swings being lower than average. However, if you increase your bet size more than this, the swings will get bigger than most players want them to be with respect to your original bet size.

Additionally, keep in mind that such betting adjustments are completely optional. You can always stick to the average size that you’re usually comfortable with.

It’s probably not surprising that the best regular payout in this game is for Santa. He gives a nice 500x win for six of a kind. However, what may be surprising is that he pays for just two of a kind as well. That’s not something you see often in this type of format, but keep in mind that he’s the only symbol to do this.

The card rank symbols in this title are lit up in a fun font. They honestly look like traditional holiday decorations that have seen some wear and tear with certain lights burnt out. In any case, the red A and blue K both pay out 20x for six of a kind. You can also earn 15x for six of the yellow Q symbols. Finally, the pays for the purple J and green 10 symbols are 12x for six of either.

The style of gameplay with the Santa’s Big Bash Megaways slot brings a tremendous degree of excitement, and the action is completely driven up by the tremendous amount to which the visual appeal is suited for the overall theme. A variety of extra features are used in this title, which is something players can’t assume for a lot of the competition.

The concept put on display as the center for this title is a strong foundation for the play style and excitement. Along with that, due to the fact that it offers a high level of quality while still standing out on its own, this video slot fits really well in this developer’s selection of games overall.

What is the Return to Player (RTP) for Santa's Big Bash Megaways?