Sea of Riches Casinos and Review 2021 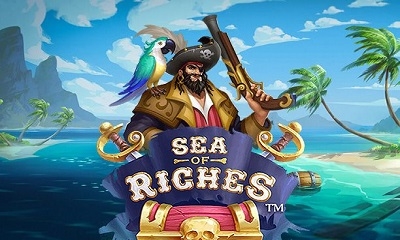 The Sea of Riches video slot by iSoftBet brings players out onto a treasure-filled island adventure. This pirate-themed game includes many ways to win with a symbol matching style. The feature set also adds more ways to get bigger wins than usual.

Casinos with Sea of Riches

An Introduction to Sea of Riches

The look and feel of pirate-themed online slots can vary greatly. When a game comes along that stands out among the rest in the sub-genre, it’s a pretty big deal.

That’s exactly why we’re very excited about the Sea of Riches online slot by iSoftBet. It brings everything that players could want all in one package.

First off, it’s a game that looks amazing. The background is very animated, and it happens on a treasure island type of setting. A pirate stands off to one side with a parrot, a pistol, a telescope and a peg leg. On the game board itself, the treasure theme continues, and all of the symbols have obviously been crafted with a great level of attention to detail, which really puts the visual appeal over the top.

On the gameplay end of things, this title does not disappoint. The regular game mode is set up so that the action is very serious. Opportunities to get several wins on the same spin happen on every play. From there, the feature set steps up and offers players ways to win bigger prizes and payouts. It’s a good balance that gives you a lot to look forward to.

The format for this title is not the most common out there. You’ll definitely want to understand how it works before playing, however. Here we’ll break down everything that you need to know:

The resulting volatility for this game is in the medium range. This is largely because of the fairly balanced overall pay schedule and the high hit-rate on the reels. You’ll run into some swings here and there. However, they won’t be very severe in general.

Additionally, we’ll be representing wins here based on the total amount wagered. If you’d prefer a multiple based on coins instead, then multiply the values given by 20.

With the Sea of Riches online slot, a lot of features are happening when you play. That means that you need to know a few things before you can understand it all. Here we’ll break down every bit of it so that you’ll know exactly what you’re getting into before you start playing, which will make it much easier to recognize what’s happening when the different features hit.

The first feature, and the one that you’ll see the most often, is the avalanche feature. It activates when you get any win. What happens is that your payout is paid to you, and the winning symbols disappear. This leaves space that allows new symbols to fall down in place to fill the gaps. Once the grid is filled back to 6×6, you get more chances to win.

This process can continue indefinitely, and it gives you lots of extra ways to get paid. As a result, you can get several wins on the same turn.

If you get a bottle symbol with a map in it on the reels, you’ll add a piece of the treasure map. This treasure map is shown in the bottom right corner. You’ll need 25 pieces to complete it, and the number you have is displayed as well.

When you collect enough pieces to complete it, you go to the next level. This game has four levels in total, and after leaving the fourth, you’ll return to the first one and start the cycle over again. Each of these levels has a modifier for the wild symbol that’s different:

Each of these features has something different to offer. Additionally, we really like how the features are rotated through with the map collection mechanism as well. This adds a lot of variety and keeps players from getting too used to one set of features.

Each time you win, you’ll charge the compass symbol. The more it charges, the more you’ll be able to trigger modifiers to the reels. Once a spin is over, the compass resets to its baseline level. Here are some of the modifiers you can get:

The basic idea here is to make it easier to get more avalanche wins. This ultimately means more value and more variety for players.

How to Win at Sea of Riches

With a medium overall volatility, adjusting to the Sea of Riches video slot is really easy. You don’t actually need to adjust anything. Instead, you’ll get the best experience from just picking a bet size near the average of what you’re comfortable with. This will shield you from the swings enough while still giving you chances for some pretty substantial prizes.

Payout Structure for Sea of Riches

The largest regular pay table wins in this game come from clusters of 15 or more. The four gem symbols make up the top-tier wins. This starts off with 150 for 15+ of the red octagon, and it continues with 100x for 15+ of the purple hexagon. With the green pentagon and blue diamond symbols, the wins are 50x and 40x, respectively.

Five coin symbols round out the rest of the pay table. The gold skull coin is worth 30x for 15 or more. However, you can earn 20x or 10x for 15+ of the silver bomb and copper hook, respectively. Additionally, you can earn 5x for 15 or more of the green bottle coin. Finally, the wooden anchor coin gets you 3.75x for clusters of at least 15 symbols.

In comparison to other titles that utilize similar pirate themes, the Sea of Riches video slot stands out in a handful ways compared to only being like other titles in the sub-genre. We also want to point out that because of the wide attraction from so many people, this online slot has a valuable position in this company’s selection of online slots overall.

The range of features incorporates several various additional ways to take down a win in addition to the typical pay table, and the action is only amplified by the overwhelming amount to which the presentation is suited for the slot’s theme. In addition to that, everything is focused on action with this video slot, and that is great for people who would rather have an action-oriented gameplay style.