Sheriff of Nottingham Casinos and Review 2021 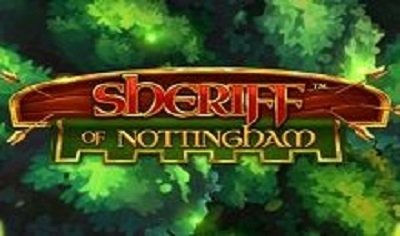 The Sheriff of Nottingham online slot by iSoftBet brings players into the tale of Robin Hood, the leader of a band of thieves who would steal from the rich and give to the poor. This game offers both free spins and re-spins modes as well as stacked wilds and other features.

Casinos with Sheriff of Nottingham

An Introduction to Sheriff of Nottingham

The tale of Robin Hood can split people along different sides of the situation, but the Sheriff of Nottingham video slot by iSoftBet pulls the story together in a way that most people can probably agree with.

This is achieved by making sure that players have lots of ways to win on every spin.

This game is set up to give a good balance between the graphical and gameplay elements. Visually, it’s a very impressive title with several different styles of coats of arms that dominate the game board. The animated background with wanted posters, castles and more really bring the slot alive as well.

On the other hand, you have the feature set and overall gameplay, which keep action at the forefront. If you like having a lot of ways to win with features as well as a generous pay table, then this is a title to check out.

iSoftBet decided on a pretty popular format for this game, and that gives it a solid foundation for the features and other goodies that it has available. Here’s what to expect:

The volatility here is on the lower end of the medium type of range. It’s not incredibly low, but with the high hit-rate and the balanced pay table, it’s low enough. That means that you will have minimal swings here and there, but it’s nothing to be too worried about.

Additionally, you should note that there are only a handful of available bet sizes, so you’ll want to think twice before picking out which bet size you want to use in your sessions.

This is a feature-heavy online slot. It’s set up so that the features dominate, even inside of the regular game mode, but at the same time, the pay table itself is pretty solid. Here we’ll show you what you need to know about what this title brings to the table.

The Sheriff of Nottingham himself is the wild symbol, and he appears on every reel. Not only that, but he shows up stacked on every single reel as well, which makes it easier to hit multiple wins on the same spin.

Here are the payouts you can get with this symbol:

The only symbols it will not substitute for in the Sheriff of Nottingham online slot are the scatters and bonus symbols. This is pretty standard as far as video slots go, so there’s no real surprise there.

Get three of the golden crown bonus symbols anywhere on the game board, no matter the reels or position, to land the Robin Riches Free Spins mode. These scatters only show up on the first, third and fifth reels.

During this game mode, as many as five adjacent reels can sync up, which means they will show the same symbols. This drastically increases your chances of hitting winning combinations, so they’re worth a lot more than the regular spins.

Note that these free spins cannot be re-triggered, and the crown scattered bonus symbols will not show up on the reels during this game mode.

The merry men symbols that say “WANTED” across the bottom are scattered bonus symbols as well. Pick up at least five of them to activate a re-spins feature (it doesn’t matter which five there are).

Non-merry men symbols will re-spin at least three times to give you chances to add more merry men to the reels. When you get more of them, your number of re-spins resets, so you can keep going and going as long as you pick up more of them.

The merry men you get on the reels give you extra payouts to end the bonus feature, and there’s a lot of value that can be had here.

If you get the Sheriff of Nottingham during the re-spins, all of the characters are removed from the game board to make it easier to collect more outlaws.

On any given spin at random, Robin Hood can receive a letter. You’ll actually get to choose between three envelopes, and the contents will hold a prize.

You’ll be given one of these four features for the given spin, and that basically just makes sure that you get more value for that one spin compared to normal. It’s another source of getting paid, but it doesn’t take up a huge chunk of time, so it doesn’t increase the volatility by much.

How to Win at Sheriff of Nottingham

The thing about the Sheriff of Nottingham online slot that players have to understand is that all of the features that drive the gameplay also push the volatility up a bit. On top of that, the betting increments aren’t as close together as we may like, so that complicates things when it comes to adjusting your bet size.

Our suggestion is to think about what size bet you’d like to use in general for a game with a slightly above average volatility. From there, pick the available bet size that’s the closest one under the amount you picked. This will give you a solid overall adjustment that won’t be too dramatic.

Payout Structure for Sheriff of Nottingham

The following wins are based on a bet size of €1.25 per turn and will change proportionately up or down based on your bet size.

At the lower end of things, you’ll have 5x wins for five of the red A or purple K. The blue Q and green J each give you payouts of 2.5x for five of either.

A ton of features and great graphics are what define the Sheriff of Nottingham video slot. iSoftBet made sure to put players in a position with this game where they would get some pretty good wins available while still getting awesome value from the features.

The combination of a strong visual presentation and a solid style of play and feature set works out really well in games with a somewhat tame theme. With that said, they handle the theme perfectly in terms of the graphical style fitting it and the features tying everything together to create a very cohesive experience for players.