Age of the Gods: Ruler of the Dead 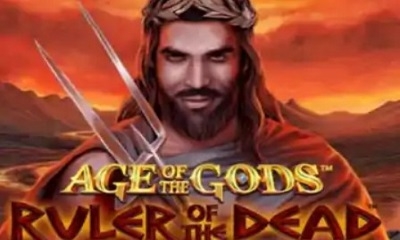 Playtech’s Age of the Gods: Ruler of the Dead online slot offers a set of four progressive jackpots. It centers around the Underworld from Greek mythology. This includes every important figure, like Persephone, Cerberus, Hades and Charon with lots of ways to win.

Casinos with Age of the Gods: Ruler of the Dead

An Introduction to Age of the Gods: Ruler of the Dead

There is no shortage of slots that have Greek mythology-based themes. Unfortunately, many of them center around more general, nebulous concepts. That makes it hard to care much about what’s going on.

The Age of the Gods: Ruler of the Dead video slot from Playtech is different. It focuses exclusively on the Underworld, which includes several key figures and creatures.

The story of how Hades became the ruler of the Underworld is an interesting one. In particular, his two brothers sort of swindled him into it. However, he clearly made the most of the situation since he got to have a giant three-headed dog guard the gates to his kingdom and kidnapped himself a bride in Persephone.

These figures and more show up on the game board in this title. On top of that, this is a game with a reasonable hit-rate with some good features. Four ways to hit progressive jackpots at random on any given spin are also available.

Playtech really likes making their games easy to get started with. That’s why the betting setup is so straightforward for this title. Here’s what to expect:

It’s really easy to pick this game up and get started. We should point out as well that the volatility is pretty high. Along those lines, you’ll need to be ready for some fairly severe swings compared to the industry average. With that said, there are adjustments you can make to account for this. We should also point out that this is in line with how other progressive jackpot slots work as well.

With the Age of the Gods: Ruler of the Dead progressive slot, a good depth of features is used. This is in contrast to many other progressive titles that rely on the jackpots alone. With multiple ways to score some pretty solid non-progressive wins, this game has a more well-rounded style of play than a lot of the competition.

Charon is the figure who takes people across the River Styx on his boat. He requires coins to do so in Greek mythology, which comes into play in a feature down below. He’s also wild.

Note that this wild only appears on the middle three reels. However, that’s up to nine spaces that this symbol can fill because of the symbols being stacked.

Cerberus is the giant three-headed dog that acts as a guardian at the gates of the Underworld. He’s also a different wild in this game. Like Charon, he appears three symbols stacked high. Also like Charon, he only appears on the second, third and fourth reels.

What makes him stand out is how he works as a multiplier. When the stacked Cerberus fills a reel completely while helping to make a winning combination, a random multiplier worth up to 5x is applied to the win. Not only do these wilds make it more likely to win, but these multipliers increase the size of your payouts as well.

If you get Charon to completely fill one of the three middle reels where he appears, you trigger a feature. This is the Coin Bonus Game, and it offers chances to get instant wins.

Random symbols will appear in the shape of different coins. When symbols match up on each side of the wild, you get instant payouts. You can also get multipliers of up to 5x on your winnings from this feature if multiple wilds cover reels.

Age of the Gods Jackpots

Four different progressives are available in this game. You get a random chance for a special feature to come up where you’ll be awarded one at random. If the feature appears with a grid of 5×4 of gold coins, you’re guaranteed one of the progressives.

The four progressives award minimum prizes at the following levels:

How to Win at Age of the Gods: Ruler of the Dead

The volatility in this game is pretty high. As a result, you should adjust by choosing smaller bet sizes than you would play with on average. This will smooth out the swings that typically come from high-volatility slots.

Since there is no minimum bet size required to qualify for the progressive, you don’t really lose anything in this. You can even pair it with playing in the turbo mode or using the auto play feature for faster play to compensate.

Payout Structure for Age of the Gods: Ruler of the Dead

You can win 150x for five of a kind combinations of the pomegranate or of the helmet symbols as well.

From there, you’re down to the card rank symbols. Five of the A gets you 100x. Things drop down to 75x for five of the K or Q symbols. Finally, wins of 50x are yours when you line up five of the J or 10 symbols on a payline.

It’s all about jackpot and feature action with the Age of the Gods: Ruler of the Dead progressive slot, and that’s tremendous news for players who want an action-packed style of play. We truly like how the graphics detail gives people a more cohesive gameplay experience instead of only being an unimportant part of the slot, and since it offers a tremendous degree of quality while still standing out as an individual game, this video slot fits perfectly in this software company’s selection of titles overall.

The driving Underworld theme is put together in a really cool way in this game, compared to it just being a non-critical part of the game like what players see in the majority of games. We also want to point out that something you will really enjoy with this slot is the additional value that the plethora of features add to your account balance.

Which online casinos have Age of the Gods: Ruler of the Dead?