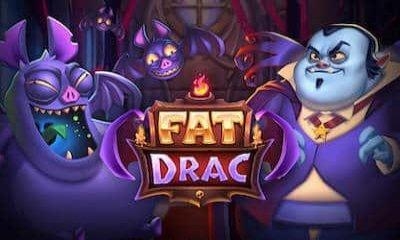 Fat Drac is a thrilling vampire-themed slot that offers tons of fun. You’ll be totally immersed in its highly engaging gameplay, from the base game itself to the enjoyable Free Games feature. The newest addition to Push Gaming’s Fat series, this slot has some awesome gameplay elements which we will cover in detail further down in this review.

An Introduction to Fat Drac

Fat Drac takes you to a lush mountain leading to the protagonist’s castle, where the gameplay unfolds. The Fat Drac symbol plays a significant role, doubling as both a reveal and a scatter symbol. He will grow bigger by drinking blood from a goblet in the Free Games feature, offering potential wins of up to 1,000x your stake.

Have your fill of fun with Fat Drac’s many engaging gameplay elements, including Coffin Pick and Instant Prize Bubbles. Grab yourself some cool rewards from the Free Games Feature.

This slot is comprised of 5 reels, 5 rows and 40 fixed paylines. The game contains a good mixture of low-paying and high-paying standard symbols. Some special icons trigger interesting features in the game, offering potentially generous payouts and plenty of thrills and spills.

The volatility of Fat Drac is on the high side, meaning that the wins tend to be larger than average. But equally, that makes them harder to land. The default Fat Drac RTP is 96.57%, though this can vary from casino to casino.

You can start playing with a minimum bet of just 0.10 coins, up to a maximum wager of 100 coins. The maximum win potential is a whopping 50,000x your stake! The highly entertaining Free Games feature will be activated when the scatter appears on the reels with at least one goblet symbol.

This slot boasts attractive, cartoonish graphics that offer a lighter feel to the spooky theme of the game. With a wonderful combination of soothing colours, the dark night envelops both the mountains and the game’s reels.

The soundtrack is generally pleasing to the ear as you play this slot, although piercing sounds increase the tension at crucial points during the game. During the game there are four powerful features. These include the highly rewarding Instant Prize Bubbles, with a prize meter to the left of the screen.

Along with the Coffin Pick game, the Instant Prize Bubbles feature can lead to some hefty payouts. Through the Fat Bat feature, you can claim all of the prizes on the Instant Bubble meter.

Like many other video slots, Fat Drac features playing card suits as its low-paying symbols. These include hearts, clubs, spades and diamonds, with hearts and clubs paying the most for five on the same pay line

The higher-rewarding symbols include a chap with a long red moustache, a skull, scroll and vampire teeth. The moustachioed character awards the highest regular symbol-win of 25x your wager when you line five of them up.

Fat Drac is the scatter as well as a reveal symbol. You need one scatter and one or more Goblet symbols to activate the Bonus game. You will be awarded five free spins, but subsequent bonus spins will then depend on how you utilize the scatter.

A combination of the scatter and one or more Goblets in the base game will activate the Free Games feature. You’ll be awarded five free spins, during which a Fat Drac meter will be opened. Whenever blood drips from a goblet, Fat Drac will rush to drink it.

Every time this happens, this scatter symbol will add a step on the meter, and each new step will make him bigger. As he gets increasingly fat, more free spins will be awarded, up to a maximum of 15.

You can win a total prize of 1,000x your wager from this feature.

The golden bat is the wild symbol that replaces all other symbols to form a win, except the Goblet symbol. This wild symbol also awards the overall highest symbol win of 250x when you line up five on a payline.

Don’t confuse the golden bat with the fat bat. Finding a fat bat allows you to collect all of the prizes contained within the Instant Prize Bubbles to the left of the screen. The highest possible payout is attached to this Fat Bat feature.

How to win at Fat Drac

To win at Fat Drac, you will have to land three to five identical symbols on the reels from left to right. Obviously, you would win more if you landed higher symbols, the highest of which pays 25x. In terms of features, you should focus on the Instant Prize Bubbles. This has a meter awarding seven multipliers prizes up to 50,000x your wager!

You can play Fat Drac free in demonstration mode at many of the highly recommended casino featured in this slot review. If you go one step further and make a real money deposit, you’ll collect a generous welcome bonus. This can also be used to learn the game, while winning real money prizes.

Hearts or Clubs will each award 1x your wager for five on a payline. Land five Spade or Diamond symbols on a payline and collect 0.5x your stake for each.

Five skulls or the chap with the moustache will award 25x or 20x your bet, respectively. When five scrolls or fangs appear, you will receive 7.5x and 5x your wager.

This awesome vampire-themed slot by Push Gaming offer a great deal of fun, but it can potentially award some jaw-dropping wins to lucky players. The engaging Free Games, Coffin Pick, Fat Bat and Instant Prize Bubbles features are all interesting and welcome additions to the game.

If you’d like to play the Fat Drac slot, you would be best off doing so at one of our recommended casinos. These sites are fully licensed, offer the latest on site-security and make use of trusted, international payment methods. You can also claim a welcome bonus at any of these top-rated casinos and subsequently partake in super-exciting tournaments and promotions!

Where can I play Fat Drac?

You can play this slot at any of the top rated casinos found on this site. All of them offer fantastic welcome bonuses which can be used to learn the game’s rules and win real money prizes.

Can I play Fat Drac for free?

You can indeed. Many of the recommended online casinos mentioned in this Fat Drac slot review offer free play in demonstration mode.

Can I play Fat Drac on my mobile or tablet?

Yes. This slot is optimised with HTML5 technology, which makes it possible to access and play at the casino via your mobile browser. Some casinos even have a dedicated mobile and tablet app which allows you to play this slot and many more.

What is the volatility of Fat Drac?

The volatility is high, which means the wins might not come along too quickly. But when they do, they tend to be bigger than average. So be patient with this particular slot.

Does Fat Drac have free spins?

Yes. The slot has a Free Games feature that awards a total of 15 free spins, with potential wins of up to 1,000x your wager

Who makes the Fat Drac slot?

This slot is a product of Push Gaming and is the third slot in their Fat series. It follows on from Fat Rabbit and Fat Santa.

What is the max win of Fat Drac?

The maximum win you can scoop from this slot is an incredible 50,000x your stake!

Which online casinos have Fat Drac?

What is the Return to Player (RTP) for Fat Drac?