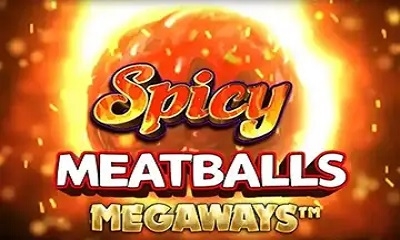 The Spicy Meatballs Megaways online slot is a fun cooking-based title with a hot theme. High-action gameplay with lots of ways to win and frequently hitting features are the order of the day here. You’ll also be able to pick up free spins with forced wild multipliers.

An Introduction to Spicy Meatballs Megaways

Something that’s interesting about genres in the online slots world is that they never really get old. No matter how many cooking-based games there are, for example, there’s always room for something fresh and new. That’s the case with the Spicy Meatballs Megaways video slot from Big Time Gaming.

What BTG has done with this title is incorporate a gameplay style that’s hot and spicy just like the theme.

This gameplay centers around a format that offers a fast-paced style. You’ll also have a lot of ways to win in the process. From there, the feature set is all about increasing your hit-rate. However, it’ll also give you wins you wouldn’t have picked up otherwise with wilds and reactions.

Visually, it’s a fun game as well. The presentation is based around a kitchen theme. Additionally, the reels themselves are on the side of a stove with large pots on top of them steaming. These pots actually come into play with the features, which we’ll get into down below. In any event, the concept and the gameplay is tied together really well in this title. That combination provides for a very fun experience for players.

The format used in this game provides the basis for a lot of the action. If you’ve never played a Megaways style game before, don’t worry. It’s pretty easy to get the hang of after just a few spins. Here’s what to expect:

The payouts in this title are based on the amount you’re wagering. For example, a €2 wager with a 10x win pays out €20. That means you don’t have to worry about coin values, numbers of coins being wagered and a bunch of other over-complicated details.

The volatility for this title is in the medium-low range. That means your swings will be lower than average, and your hit-rate is a little above average. Some betting adjustments can be had thanks to this. However, we’ll dive into those after we look at the features.

A few different features make up the majority of the action in the Spicy Meatballs Megaways online slot. We’re going to break them down and show how important each is in the overall scheme of things. This will help you to better be prepared to understand how the game mechanics work before you start actually playing and getting into sessions with this slot.

The wild hats show up on the middle four reels only. That’s the second, third, fourth and fifth reels. They will substitute to help you get extra payouts you would have otherwise missed. However, there are a few things to know about this hat.

First, it doesn’t give any wins on its own. Since it doesn’t show up on the first reel, it can’t generate its own winning combinations. Second, it doesn’t substitute for the meatball symbol. The meatball is a different wild with some additional characteristics that we’ll look at below.

Finally, it can be used to substitute for multiple symbols at the same time to get different winning combinations. That makes it as useful as possible in this title.

Every single time you get a winning combination, you’ll trigger the reactions feature. The way this works in the Spicy Meatballs video slot is straightforward. Your win is paid, and all of the winning symbols disappear. This creates space, which allows new symbols to fall into place to fill up the grid.

There’s one exception to this that you should know because it’s important. The meatball symbols, which we’ll describe below, do not disappear if they’re a part of a winning combination. However, they will fall downward, and if they’re at the bottom of the screen, they will fall off of the reels completely for the next reaction.

On every spin and every reaction, you have a random chance to add a meatball to the reels. It’ll come from one of the pots at the top of the game board. This means they can only show up on the second, third, fourth and fifth reels.

When they leave the pot, they will take on the multiplier of that pot. This can be worth up to 15x. Those multipliers will increase one time for each time they fall down during a reaction. This continues over and over until either the reactions are over or they fall off the bottom of the game board.

If you get five or more reactions on the same paid spin, the free spins feature is triggered. You’ll be given eight free spins when you trigger this feature. However, for each reaction after the fifth one, an additional free spin is added to your total.

What makes the free spins special is that they always start with a wild meatball on one of the middle four reels. What’s more is that the multipliers carry over from the regular game that triggers the feature into the free spins. If you get at least five reactions on a free spins, four extra free spins are added to your total. Additionally, one extra free spin is added for each reaction after the fifth one.

How to Win at Spicy Meatballs Megaways

We mentioned up above that the volatility is medium-low for this title. A big part of that is because the hit-rate is high and the pay table is balanced. From a practical standpoint, however, it means you won’t have so many big swings.

One way to adjust to this is to increase your bet size by 33 to 50 percent. This will allow you to get better payouts for your wins. However, you still won’t be subject to swings that are so bad, and that’s a big advantage.

The four different foods make up the top-paying wins. Six of the eggplant gets you 10x. Note that this is also the only symbol that gives you a win for just two of a kind. The red tomato is worth 3x for six. A blue pepper and green pepper also make appearances, and they pay 1.5x and 1x for six of a kind combinations, respectively.

Six card rank symbols round out the lower end of the pay table. They are paired up so that every two symbols has the same win. Six of the purple A or red K will give you a 0.9x payout. A 0.8x payout is yours for six of the blue Q or green J. Finally, both the 10 and 9 award you 0.7x for six of a kind.

This online slot is a strong component of this software developer’s whole selection of online slots because of its level of graphics and style of gameplay, and the concept put into play as the center for this game is a central springboard for the play style and fun. The visual appeal of this title is top-notch and raises up the whole gameplay style.

The style of gameplay in this game offers a tremendous amount of excitement. On top of that, the range of features includes a variety of various extra ways to get paid outside of the typical pay table.