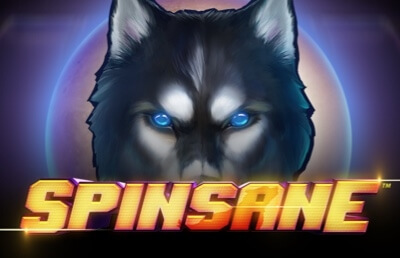 The Spinsane video slot by Net Entertainment breaks all the rules that you might think of when it comes to how a video slot plays. This title has a different approach to things with a wolf-based theme, multiple substitutions, wilds and a free spins mode with a forced, random reel full of wilds on each spin. In this Spinsane review we also explain how to win and list great online casinos to play the slot at.

Net Entertainment is a company that’s been known to push the envelope in the online slots industry (and other sectors) in various ways. This includes both graphical considerations and those of gameplay. With the Spinsane slot, they have focused more on a different style of gameplay than most players have probably ever experienced.

NetEnt has taken some old game mechanics primarily known in classic slots and updated them for the modern era to create an atypical but action-oriented style of play.

The end result is that this game looks fine, but it’s clearly more about the gameplay elements and the action on that end of things than how its appearance. At the time of this game being released, it’s pretty clear that it’s something NetEnt uses as a measurement tool to see how players respond to this atypical style of play.

At first glance, this is a pretty straightforward game. However, there’s a lot more to it than what you initially see from the following:

These points can’t really adequately explain how the gameplay is different here, but we’ll get into it down below.

In what you’ll find here, we’ll look at what makes this title so different from other games. Spinsane definitely brings a style of play that’s outside of the box, and it comes from the unique way the regular pay table works and the features come together.

The first thing we want to point out is that blank spaces will show up quite a bit on the game board. Don’t be alarmed by this. With the way the rest of the gameplay is set up, you’ll have plenty of opportunities to win, but the atypical number of paylines (ie: 27) will start to make more sense as you get into the game.

There are three sets of symbols in this game, and each of them has a regular version and a super version. The super versions all have wolf claws through the middle of them, and they also act as limited wilds that can substitute for the regular version of the given symbol.

This is used to give you the best possible winning combination on every single one of the 27 paylines.

It’s worth noting that a super symbol can count as itself on one payline and a regular symbol on another because the whole idea is to give you better chances at getting wins for a higher hit-rate.

The wild in this game is a blue circle with a golden rim and a flaming W through the middle of it. You’ll find these wilds on the last four reels (second, third, fourth and fifth), and you’ll also see that it substitutes for every symbol in the game except for the scatters, which we’ll look at below.

Because wilds don’t show up on the first reel, they don’t give you their own winning combinations.

Scatter symbols are the wolf howling at the moon with the blue trim around the moon symbol, and they appear on all reels. In fact, they can also appear stacked and partially stacked at times as well.

No payouts are awarded for this symbol. However, you can get a free spins mode with at least five of them on the game board at once.

Your number of free spins that you’re awarded will be the number of scatters that start the feature doubled. For example, if you activate the feature with six scatters, then you’ll start with 12 free spins.

During the free spins mode, wilds will fill up one of the reels at random (second through fifth only), which gives you better chances to win. Additionally, each scatter that shows up on the game board, no matter how many appear at once, will add a single free spins to your total.

How to Win at Spinsane

The key thing that we notice about this game is that the blank spaces are going to trip some players up. However, the hit-rate is higher than you might expect, which means that the volatility is going to be lower than you expect.

As a result, you may want to consider playing with a slightly larger bet size than usual and playing shorter sessions with this game. The volatility being so low allows for this because it keeps the swings on the lower end of things as well.

There’s a lot going on in the Spinsane online slot. However, here are some highlights to point out:

With those things noted, here are some things that may turn some players off:

Overall, Net Entertainment has done a tremendous job with the Spinsane video slot in terms of putting together a title that breaks a lot of norms and that offers a unique style of play. It may not be a good fit for everyone, but we think that most players will enjoy it.