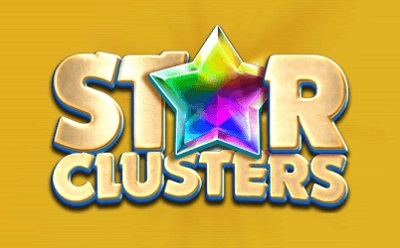 The Star Clusters Megaclusters online slot by Big Time Gaming brings players into a gem-filled grid with a style of play that most players will have never seen before. This takes gem cluster-matching to a whole new level with tons of ways to win on a given spin as well as cascading wins and other opportunities to get paid.

An Introduction to Star Clusters Megaclusters

There have been a number of cluster-based games in the industry, and it may be the most popular way to structure a game outside of the usual paylines or “all ways” options. However, Big Time Gaming’s Star Clusters Megaclusters video slot takes things to a whole different level than what most players will have ever seen before.

A different level of gameplay excitement is achieved with this title because it throws some of the general rules of the cluster sub-genre out the window and gives a fresh take on a common format.

The visuals of this game are good for what it is. The gems all look great, but the background is a pretty plain rotation of different colors that’s set up in a way that it doesn’t take attention away from the main gameplay area.

As far as the action goes, it’s fast and serious with lots of ways to get paid on every single spin, including a whole lot of opportunities to win over and over again on the same turn.

The format for this title is atypical, but it’s easy to learn. We’ll break down everything that you need to know in the following:

The volatility of this game is pretty low because the hit-rate is super high. In fact, this may have one of the highest hit-rates of any slot that we’ve reviewed. With that said, you can still get some pretty significant wins because of the ability to pick up so many payouts on the same turn, which we’ll get into down below with the features.

The gameplay is the center focus of the Star Clusters Megaclusters online slot to the expense of everything else. We’re going to break down the various features here and how they come together to give players one cohesive experience that brings a lot of action and a lot of value.

The main grid for this game is 4×4. However, a large portion of your gameplay will involve situations where there are plenty more than 16 total spots on the game board, and this is tied in with the reaction feature.

When you get a winning combination, you’re paid for it as usual. However, once you’re paid, those symbols explode into four randomly chosen smaller symbols in a 2×2 format. This smaller format, which would be the size if the entire game board was 8×8 instead of 4×4, can then be used to create winning clusters along the same lines, and that process continues over and over.

During the regular game mode, the symbols cannot split to be any smaller than what would create an 8×8 grid overall. That is to say, they will be half the size of the normal symbols that you begin with at the least. However, that changes during the free spins bonus round, as you’ll see below.

The idea here is that you will keep getting reaction wins with new symbols coming into place over and over again until no new wins are available. This makes it a whole lot more likely to get multiple wins all on the same paid spin.

The rainbow star symbol is a regular wild in this game. It will always count for any winning combination it can be a part of, and that includes being a part of multiple clusters at the same time.

This rainbow wild will substitute for anything else in the game other than the golden star wilds.

The golden star wilds are a little different. You can have up to two of them appear on the board on a given spin, and they will increase the multiplier by a factor of one (shown at the top of the game board). All wins are then multiplied by that value for the remainder of that set of reactions, and they start over on the next regularly paid spin.

To activate the free spins feature, you need to get at least five reactions on the same paid spin. Two extra spins are what you start with, but an additional free spins is added to your total for each reaction beyond that (six reactions gets three free spins, seven reactions gets four free spins and so on).

Something really cool is that any golden multipliers you get on the triggering spin will carry over into the free spins bonus round as well. On top of that, it doesn’t reset until the free spins mode is over and can accumulate up to a total of 20x.

In the free spins mode, things can get smaller than usual down to what would create a 16×16 grid on the reels, which is a pretty big deal because it makes it so much easier to hit winning combinations and resulting reactions.

How to Win at Star Clusters Megaclusters

You need to recognize that the volatility is very low in this game and that the hit-rate is very high. As a result, you can increase your bet quite a bit (as much as double) compared to what you’d normally be comfortable with because you’ll get tons of small and medium wins that will keep the swings from being too bad.

At the same time, you’ll increase the payouts that you get if you go on a big run of wins, and that’s the way you get the best prizes available in this game.

There are seven gem symbols that pay out in this game, and your win is multiplied by your total bet size. However, you’ll need at least five in a cluster to win at all, and the number of gems you get in a cluster determines your win as well as which gem it happens to be.

The whole thing that Big Time Gaming has done here with their Star Clusters Megaclusters video slot is impressive to say the least. They have come up with a new format that’s very viable while making sure that it doesn’t get too far outside of the box as far as regular gameplay is concerned.

That means that players will enjoy having something new with this title while simultaneously being in a position where it’s comfortable enough for them to stick around. It’s a massive win-win on every level, and we’re hoping to see plenty more games using a similar format.