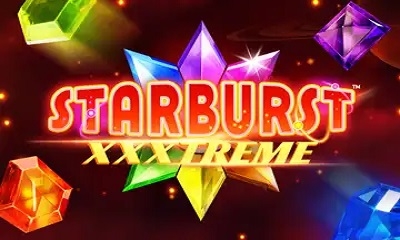 The Starburst XXXtreme online slot is an updated version of the original with new features. Players have the option to force wild multipliers with the XXXtreme Spins feature. However, you also have plenty of new ways to win compared to the original in this title.

An Introduction to Starburst XXXtreme

We love seeing software developers go back and provide updates to their most popular online slots. This is exactly what has happened with the Starburst XXXtreme video slot. They have created a situation where you’ll have plenty of reasons to want to try out this new version.

While the visuals are pretty similar to the original, the gameplay is much different. The volatility is much higher with chances for significantly larger payouts.

From a visual standpoint, the only real change has been to the accents. Instead of being based on a blue and white space theme, things are more red and black here. It’s like the difference between the protagonist and the antagonist in a sci-fi movie. In any case, it still looks great, and we like the edge it gives the presentation compared to the original.

On the gameplay end, however, things have changed a ton. The original was a low-volatility game with a high hit-rate. In this version, the hit-rate is reasonable, but the volatility is much higher. This comes from a new set of features that really drive up the potential for big wins. However, that comes along with other adjustments to the pay schedule that take away some of the small and medium payouts to compensate.

The layout for this game is really straightforward and easy to get used to. It’s similar to the original, but it’s not exactly the same. Here’s what to expect:

All wins in this game are based on the total amount you’re wagering. For example, if you have a 20x payout with a €4 bet, then the total win is for €80. As we also mentioned above, this game has a high volatility. It’s actually one of the higher ones we’ve ever seen for a non-progressive slot. That’s something to keep in mind with your bet sizing, which we’ll go over further down below.

The feature set is what really sets the Starburst XXXtreme online slot up differently from the original. There are several features in this game that offer chances for most payouts. You can get better chances to win, or you can get much larger prizes from what this game has to offer. In the following, we’re going to break this down, and we suggest players take a look at it. Even if you were a fan of the original, there’s a lot that’s different in this slot.

The wild symbols in this game are eight-pointed stars. They have all of the different colors found in the game on their points with a white center. These wilds appear on the middle three reels only, so they don’t help you to get their own payouts.

Wild symbols are much more important in this game than most others. In fact, they are the centerpiece of the entire game because of the features they’re tied to.

We’re going to look at each of these additional features individually because of how important they are. They each have their own mechanics, but they are all tied together through this one star symbol.

One of those mechanics is that they always expand. These are expanding wilds every single time they appear, and that makes it much easier to hit multi-line payouts. However, it also ties into other features once again as you’ll see below.

In the Starburst XXXtreme video slot, one of the first differences you’ll notice from the original is the multipliers. Every single wild symbol is tied to a randomly chosen multiplier. The available values range from 2x all the way up to 150x. When a wild is included as a part of a winning combination, then it multiplies the value of that combination accordingly.

Any number of wild symbols landing on the game board also triggers a re-spin. Any wilds already on the grid will hold in place, and the other reels will spin once more for free. This gives you a free chance at some serious payouts, but that’s not the end of it.

If you pick up new wilds on the reels on your re-spin, it will lock in place and give you yet another re-spin. With this feature, you can potentially end up with three re-spins in a row if you pick up a new wild each time.

At the end of any random spin or re-spin, you can trigger the random wilds feature. This feature gives players randomly added wilds anywhere on the second, third and fourth reels.

Overall, this is essentially a free opportunity for players to get the most important symbol in the game. That’s obviously something that’s completely welcomed as a part of this experience.

The XXXtreme Spins feature is an optional side bet that you can activate. There are two forms of activating it with different prices, but they both involve forcing wilds to show up on each spin. Here are your two options:

These side bet options will stay activated until you turn them off. That means you should exercise caution if you’re only meaning to play them for a few spins.

How to Win at Starburst XXXtreme

The volatility of this game is pretty high. As such, we suggest lowering your bet size to something on the lower end of the range you’re comfortable with. A drop of about 33 to 50 percent would be appropriate in this case.

However, if you’re going to play with the XXXtreme Spins feature, you should drop it even more. The cost is much higher, and the volatility is pretty high as well. It can be a really fun feature, but it’s critical to pay attention to the cost involved.

Overall, the pay schedule for the Starburst XXXtreme online slot is top-heavy. The golden bar symbol pays 50x for five, and things drop to 20x for five of the lucky 7. From there, there’s a serious drop to the gem symbols.

The golden triangle gem gets you 6x for five of a kind. With the green octagon, you’ll be awarded 5x for five, and five of the orange or blue pay 4x or 3x, respectively. The pay table winds down with another 3x win for five for the purple diamond.

When compared to other games that use related driving concepts, this title is different in a number of areas as opposed to just being like other online slots in the sub-genre, and the gameplay experience is tremendously action-focused with a serious number of ways to hit big payouts. A variety of features are available in in this title, which is a fact players can’t necessarily say for plenty of the competition.

As a result of the serious attraction from so many people, this slot has a fitting spot in this company’s selection of slots as a whole. It’s also worth noting that the excitement is only boosted by the tremendous degree to which the aesthetic appeal fits the overall driving concept.