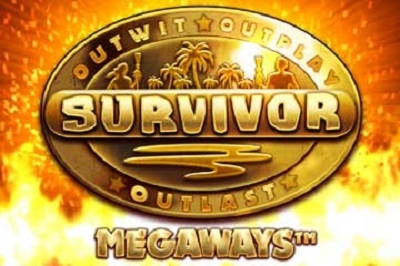 The Survivor online slot by Big Time Gaming brings players all of the excitement and action of the original hit television show that defined reality TV. With the Megaways format in place, you’ll have thousands of ways to win on every spin with tons of action-oriented features including free spins, multipliers, chain reactions and more.

An Introduction to Survivor

When people look at the state of television today and see so many “reality” television shows, many do not realize that Survivor was the first of its kind in this genre. Big Time Gaming made a licensing deal with CBS to allow them to produce the Survivor video slot, and they have stayed true to the nature of the show in this game.

While you aren’t going to get voted off of the island in this game, you will find that there are a lot of things to get excited about and a lot of action to be had.

When you first look at this game, you’ll see a tropical forest landscape behind the beach, which is essentially the setting for the show. The symbols and overall visual appeal are tremendous, and they show exactly what players would see if they were on the television show as well.

The layout of this game is made for action, and you’ll have a ton of ways to get paid and win on each spin. Here’s what to expect:

The volatility of this game is actually on the low side, and a lot of that has to do with how the Megaways format lends itself to a whole lot of small and medium wins. This is on top of how the features work to make this even moreso the case.

The regular pay table and the features both provide a strong amount of value in the Survivor online slot, which is something that you don’t often see. We’ll show you everything that you need to know in what follows.

On the left side of the reels, you will see indicators for the red team and blue team that start off with a “x1” symbol beside of them. Those are the wild multipliers for that given spin for the wins that start with the three symbols immediately to the right of those team indicators.

Any urn symbol that shows up on the game board in the top or bottom sections of the grid will increase the multipliers for their respective teams for combinations that include a wild for that spin.

This is a really innovative way of incorporating the team concept of Survivor into the slot, and it’s truly something that we have never seen before. Note that the multipliers will reset after each spin but will persist during the accompanying chain reactions (see below).

We want to point out as well that the urn symbols can appear in three different sizes taking up one, two or three spots on the reels. These will add one, two or three to the respective wild multipliers along these lines.

If you get an urn or a winning combination in this game (not counting scatters, which we’ll cover below), then you will trigger the chain reaction feature.

This works by having those symbols that are either urns or winning combinations disappear. New symbols will fall down in place from above to give you an opportunity to win yet again with no additional cost.

This can continue over and over again, and it will keep going to give you new wins until there are no more winning combinations available. At that point, the feature will be over, and you’ll be able to start back into your regular game once again on the next spin.

You’ll notice when you play the Survivor video slot that the center row of symbols will help you to get payouts but isn’t actually on the top or bottom team’s side. This is called the extra reel, and while it fills in a little differently, it works just the same as regular paying symbols.

One thing to note about this extra reel is that it’s the only location where wilds can appear. However, since this is a horizontal reel, this means the wilds can appear on any spot that the reel covers, which includes the second through sixth vertical columns of symbols.

The wild multipliers will interact with the wild symbols based on which spot the winning combination affected begins (according to the three respective spots for each of the two teams).

The golden logo symbol for the Survivor online slot is the scatter in this game. It can show up in any position, and you can get three of a kind at a minimum to trigger a set of 15 free spins. The multipliers you have for the wilds for each team will stay in place for the free spins.

However, you can also increase this multiplier using the urns as usual. The only difference is that, during the free spins mode, the wild multipliers will not reset after each spin. This allows you to accumulate some really serious multipliers by the time the feature is over with.

You can also add five extra free spins by getting at least three scatters on the game board during the bonus round.

How to Win at Survivor

The play style of this game puts you in a position where you don’t have any betting or other options that can change the RTP percentage. What that means for you is that you can choose whichever bet size you’re comfortable with and use that as a reasonable strategy.

With that said, we recommend using a slightly larger overall bet size than you would normally. We recommend this because the volatility is so low, which means you’ll have chances of hitting bigger wins with a larger bet size without the swings getting out of hand so easily.

Six of the red mask pays 2.5x. Note this is a multiple of your total bet size like all other wins described here. Six of either the blue or green masks will give you 0.7x.

Six card rank symbols are available as well. The purple and red K symbols pay 0.6x for six of a kind, and you can earn 0.5x for six of the blue Q or green J. Finally, the orange 10 and cyan 9 symbols get players 0.4x payouts for six.

The Survivor online slot brings the action of the television show to the reels in a serious way. Big Time Gaming took a lot of care in crafting a strong slot title for this extremely popular brand, and it does not disappoint in the least bit. We are particularly impressed by how they slightly shifted around the Megaways format to bring the team-based motif into the forefront of the gameplay.