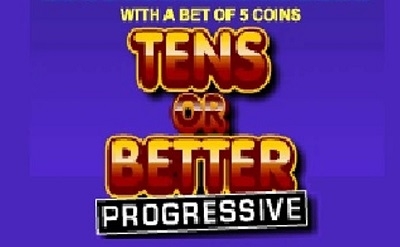 The Tens or Better progressive video poker game by iSoftBet gives players an opportunity to take down a massive top win that’s larger than the usual royal flush payout. This is all while playing the classic Tens or Better rule set that pays you for more hands than the standard Jacks or Better style of video poker.

Casinos with Tens or Better Progressive

An Introduction to Tens or Better Progressive Video Poker

There are a wide range of different styles of video poker out there in the world. They are separated by different tweaks to their rule sets, but most of the ones that do not have wild cards in them are essentially variations of Jacks or Better.

As the name Tens or Better progressive video poker implies, this game is very similar to Jacks or Better with more paying hands and a variable top prize based around a progressive jackpot.

Visually, this game is laid out like most of iSoftBet’s other video poker and progressive video poker titles, which creates a very real sense of consistency, and that’s something that players really appreciate since it means there are no major differences in the interfaces from one game to another that they have to learn.

The progressive is shown up in the top-right corner of the screen along these lines, and it’s very clear what all of your betting choices and other options are as well.

As is the case with most video poker games, you can wager from one to five coins with this game. As is also the case with most other titles in the genre, the best payout rate is had by always wagering five coins. In this title, it activates the progressive, which gives you proportionately better payouts than other coin amounts.

The coin sizes start down at the €0.01 level for a minimum wager of €0.05 per hand. You can move those coins up to €1 apiece as well, and that means €5 per hand is the maximum amount that you can wager.

It’s clear that players get a lot of options between these two extremes, and that goes to show that iSoftBet really cares about you being able to customize your experience to be exactly what you want it to be without having to feel like you’re going to break the bank. This is how we think things should be in all online casino games, and it’s a philosophy that’s definitely in play here.

A few features and other things you’ll want to know about the Tens or Better Progressive video poker game are listed in what follows. It’s important to note that some of what we’re about to list is developer-specific, so it’s worth taking the time to read through these points instead of skipping over them and mistakenly assuming that everything is the same as what you find with video poker titles from other software companies.

A feature that most players expect out of video poker games is recommended holds. These are recommendations on which cards players should hold before discarding.

While this is a nice feature to have, iSoftBet unfortunately has a history of their recommendations sometimes being a bit off from what’s actually best from a strategic standpoint.

They aren’t always off by a lot compared to what the perfect plays would be, but they tend to be mistaken in very specific types of situations. For whatever reason, they really like to hold onto sets of three consecutive cards, also known as backdoor straight draws in the more general poker sense. However, in video poker, they’re not very valuable.

This is something to keep in mind, and it’s one of those things where you’ll probably want to have a strong hold on proper strategy before you really dive into this particular title.

Caution With the Autoplay Option

Along similar lines, there is an autoplay option available, but we’re going to recommend that most players give it a pass. The reason for this is that it plays the hands automatically based on the same algorithms and rules used for the recommended held hands. As such, it’ll have you automatically playing in some pretty sub-optimal ways.

While that’s a bit of a drag, one option some players may find attractive is to simply go on autoplay with a smaller bet size than usual so that the mistakes the automatically held cards commit won’t be as severe over the course of your session compared to any natural mistakes you would make while playing manually at your usual bet sizes.

We’ll get into how the progressive is won down below, but what follows is the basic payout structure for this game.

For all of the wins on this Tens or Better progressive video poker machine, we’re assuming that you’re playing with five coins:

This is a pretty standard win distribution, and there’s not really much to talk about here because it’s so within the standard bounds of what players see from these games.

The way that you win the top prize in this game, which is the progressive jackpot, is by hitting a royal flush where the card ranks are in the correct order of Ace, King, Queen, Jack and Ten from left to right.

This actually comes out to be a 1/32 chance of all royal flushes, which we think is a pretty reasonable measurement for awarding such a big prize in a game like this.

The first thing you should do is make sure that you’re always playing with five coins. If you aren’t doing that, then you are really hurting your average payout rate in this game. If you need to drop to a smaller coin size, that’s completely fine, but you really need to make certain that five coins are activated at all times.

Second, you should avoid using the automatically generated hold recommendations and instead go with solid video poker strategy. This may take a little bit of time to learn, but the key spots to know are the following:

More advanced strategies are obviously available, but these four points will get you through most of the anti-intuitive spots where the hold recommendations would otherwise steer you wrong.

We really like to see companies like iSoftBet put their creativity into a variety of genres, and video poker is as good as any. They have a great selection of titles with plenty of progressives, and their progressive version of Tens or Better video poker is a great example. It has a higher hit-rate than some of the other non-wild games since it pays out for hands as low as a pair of tens, but it also gives players serious opportunities to take down a big top payout.

Which online casinos have Tens or Better Progressive?