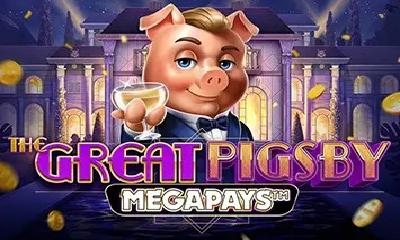 The Great Pigsby online slot from Relax Gaming is a gorgeous and hilarious take on a literary masterpiece by a similar name. Pigs have taken the place of the main characters, and with four progressive jackpots, it’s easy to see how this fits into the wealth-based theme of the original book.

Casinos with The Great Pigsby Megapays

An Introduction to The Great Pigsby Megapays Slot

If you’ve ever read The Great Gatsby, you know it’s a novel about dynamics between extremely wealthy individuals. Relax Gaming slots often take serious themes and add tweaks to give them a bit of humor and to take the edge off. That’s exactly what they did with The Great Pigsby video slot.

All of the signs of wealth are still here in a major way. However, the characters have all been changed to pigs, which adds a bit of fun to an otherwise super serious concept.

Even with the pigs included, the theme of this game is obviously a very high level of wealth. It starts with the giant mansion in the background lit up in a night scene. From there, a variety of symbols on the game board fit the time period the book is set in. This includes cigars and drinks, gramophones and other icons of wealth from the 1940s and 1950s. Regardless, this also ties into a lot of the gameplay elements as well.

Relax Gaming loves putting out games that have particularly cohesive styles of play. We see that with how the wealth-based concept matches up both visually and in terms of the features and game mechanics in this title as an excellent example. Immediately when you start this game, you’ll see the four progressive jackpots down the right-hand side. However, other wealth-styled features and ways to pick up big wins are also available in this game, which we’ll get to in more detail further down below.

The Megapays line of games are a set of progressive jackpot titles that use Megaways-style layouts. As such, that’s what you get here. However, because there is so much variation between different Megaways type games, you shouldn’t take it for granted that you’ll know how this game works just because you’ve played other Megaways slots. Regardless, we’ll show you exactly what you need to know to get started off on the right foot here.

Due to the fact that the number of winning ways changes after each spin, the bet sizes and wins aren’t based on anything “line-based.” Instead, they’re just based on total amounts being wagered. For example, if you’re betting €2 per spin and pick up a 5x payout, that’s worth €10. We believe this is the easiest way to handle listing payouts for players, and we’re glad that most Relax Gaming slots use it.

In terms of volatility, this game is a bit up there because of the progressive jackpots. However, the features also add to that, which really pushes it up quite a bit. This is the kind of thing that leads to what we would call a high volatility. Additionally, some players would call it very above-average. In either case, we have some betting adjustment suggestions further down that can help players to mitigate this volatility and the swings that come with it if they are an issue.

Gameplay and Features for The Great Pigsby Megapays Video Slot

Something we have to give the developer credit for is that they didn’t just rely on the progressives. Instead, The Great Pigsby Megapays online slot offers players a variety of different types of features. In fact, the game mechanics of these features often give a higher hit-rate than you’d expect with a game that has a volatility level this high.

In the following, we’ll look at each of these features and what to expect. Looking over our breakdown here will make it a lot easier to jump in and get started.

Since we’re in the middle of such a wealth-based game, it makes sense that the important symbols are made to reflect that. We saw the same idea in the Book of Lady slot, and here we see it with golden coins. These golden coins have piggy banks on them, which fits the theme in more ways than one. These wilds can only appear on the second, third, fourth, fifth and sixth reels. Subsequently, they do not give their own winning combinations.

However, they do have two features that make them stand out. The first is that they always expand to cover the entire reel they are on. As a result, this means you’ll get a lot of extra ways to run up more wins. Additionally, a multiplier is always shown ranging from 2x to 7x for that expanded wild.

What really takes this over the top is when you get more than one wild as a part of a winning combination. In that case, the respective multipliers then multiply by themselves. This gives you opportunities for some truly huge payouts and prizes from the regular pay table.

When these wild coins appear, they’re collected in the golden piggy bank at the top. This gives chances for free spins and the multiple re-spin features.

One of the features that the wild coin collection can offer is the free spins mode. It’s a central feature, much like in the wealth-based Star Clusters Megapays online slot that also has a similar format. In any event, you’ll begin this feature with 10 free spins when it’s triggered. However, it offers quite a bit more than the regular game mode.

When a scatter symbol lands anywhere on the game board, it does a couple of things. First off, one of the royal card rank symbols is removed from the game for the rest of the free spins. This includes the A, K, Q, J and 10 symbols, and the idea is to make it easier to get payouts for the higher-paying combinations.

Additionally, each scatter that lands on the reels adds two free spins to your total. Since Relax Gaming didn’t include a limit, you’ll find that this game has no maximum to the number of free spins you can get in a single activation of the feature in this way.

Another feature that the wild coin collect can trigger is the Wild Re-spin. This is one of those game mechanics that is simple but very effective. Between two and five reels are turned completely wild with their multipliers working regularly. This allows for the biggest non-progressive payouts in the game.

In The Great Pigsby Megapays video slot, you can also trigger the Great Pigsby re-spin, which is obviously based on the name of the game and the central character of the story. In this case, it also ties into how this feature works. You essentially get a free re-spin with a number of the top-paying regular symbols added. They appear as an overlay, so they cover up any other symbols that land. However, wilds will still expand and function normally.

The Megapays feature can be triggered at random on any spin. It takes you to a different set of reels where you’re trying to accumulate the symbol shown on the board with re-spins. The number of symbols collected determines if you win a jackpot, which can be the following:

The chances of triggering this jackpot feature is proportionate to the size of your wager. For a simple example, a bet size of €2 would be twice as likely to trigger it as a wager of €1. This keeps things fair and allows players at even the lowest of stakes a chance to win the biggest payouts in the game.

How to Win at The Great Pigsby Megapays

The main thing to keep in mind with this game is that the volatility is really high. That’s due to two things in particular. On the one hand, you have the very generous but top-heavy features. Additionally, players have four progressive jackpots with the top one guaranteeing at least mid six-figure wins.

If the swings that come from this are too much for comfort, we have a simple solution. All you need to do is drop your bet size down by somewhere in the range of 33 to 40 percent. This will smooth out the volatility quite a bit and make the swings a smaller part of your bankroll.

The male and female pig characters pay 3x and 2x, respectively, for six of a kind. From there, the headband with the features gets you 1x for six. Players can also earn 0.8x for six of the gramophone and 0.5x for six of the cigar and drink.

Additionally, the A, K, Q, J and 10 symbols all come in a gorgeous font that matches the art deco style of the time. They all pay 0.4x for six of a kind combinations.

With The Great Pigsby Megapays slot, everything is about matching up the visual presentation and the gameplay with the theme. Relax Gaming did an awesome job of this, just like they have a reputation for doing with their other games. With big progressives, a gorgeous look and some super fun features, this is a title that we think will appeal to just about any kind of player.

Which online casinos have The Great Pigsby Megapays?

What is the Return to Player (RTP) for The Great Pigsby Megapays?