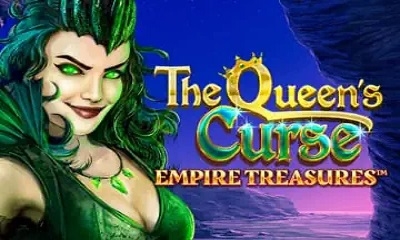 Playtech packed a lot of action into a single title with their The Queens Curse Empire Treasures online slot. This game sees good and evil women face off while players reap the rewards with strong wild payouts, a re-spins feature and other ways to get paid.

An Introduction to The Queens Curse Empire Treasures

No one will ever seriously claim that Playtech isn’t one of the most important online slot developers of all time. However, one of the things that makes them so impressive is that they have kept up with the times. You can see this in a big way with their The Queens Curse Empire Treasures video slot.

Not only does this game step out of the box a bit with its theme, it also offers strong gameplay.

The theme has an evil queen facing off with a good princess. It’s a dynamic that we’ve seen in a lot of stories and fairy tales. However, we rarely see slots handle it in a way where they are the main characters. In this game, we do, and those characters look excellent. They have a tremendous amount of detail that shows Playtech really cared about their presentation and quality.

On the gameplay end, you get a good balance between the features and regular game mode. They didn’t lean on the crutch of giving you thousands of ways to win. Instead, the action they produced is from a wonderfully balanced pay table and some smart features. What stands out to us the most about the gameplay is that everything simply makes sense. Additionally, nothing seems disjointed or out of place. Instead, it all flows perfectly with the overall theme and concept for an immersive experience.

The layout offers plenty of ways to get paid in this title. However, they did not resort to the “all ways” approach and instead went for a more traditional structure. With that said, you’ll have a hard time finding many games with the exact same format as this one. Here’s what you’ll want to know before you get started playing:

The volatility of this game is a bit above-average. This is because the features and jackpots hold a lot of value, and the largest jackpots especially don’t hit very often. The hit-rate is pretty reasonable, however, and comes in around average. A big part of this is how easy it is to get small and medium wins thanks to the stacked symbols.

The gameplay of the The Queens Curse Empire Treasures online slot centers largely around the features. Additionally, these features set up a really nice dynamic with the theme of the game. As a result, while there is quite a bit to keep up with, it all makes sense based on the type of game you’re playing. That means that once you see how everything works, it’s easy to remember.

The wild symbol is a stylized W in a bright gold. It appears on all five reels and gives some strong payouts along the following lines:

On the first and last reels only, you can find scatter symbols. They feature the dark queen and the princess facing off with the castle in the background. When you get both on the game board, you get one of three features.

A random symbol is chosen for each free spin in this game. That becomes the fully stacked symbol that shows up stacked several times over on the reels. However, the queen and the scatters cannot appear stacked during this feature.

The queen free spins is all about symbol transformations. When you get a winning combo of high-paying symbols, they turn into queens before payout out. This gives you better payouts than usual for more value.

In this final free spins option, mirror wild symbols can appear on the middle three reels. When this lands, it picks a high symbol and turns them all into wilds. The mirror itself also acts as a wild. This makes it much easier to get payouts in this feature.

If you’re able to get stacked princess symbols on the first and last reels simultaneously, you trigger The Queens Curse Empire Treasure video slot’s re-spins bonus round. The idea here is that the reels re-spin with only princesses and empty positions. Each time you get at least one additional princess on the reels, you’ll continue getting re-spins.

You’re guaranteed a payout of at least 2x in this feature. However, if you’re able to fill up the entire game board with princess symbols, your payout can increase to as much as 1,000x.

This game also has a jackpot link to the other Empire Treasures jackpot titles from Playtech. You have a chance to win these progressives on every single spin at random. Additionally, no specific winning combination is needed to do so. The starting values of the four jackpots are as follows:

Your chances of winning these scale with the size of your bet. For example, a wager of €3.00 will have twice the chance to win a progressive as a bet of €1.50. Additionally, the lower jackpots are won more often than the higher ones. This gives the larger jackpots more time to build up to the point of being able to give a life-changing sum of money.

How to Win at The Queens Curse Empire Treasures

In online slots that have an above-average volatility like this one, we have recommendations for bet sizing adjustments. Specifically, we highly suggest dropping your bet size down a bit from what you’d use on average. A decrease of around 25 to 33 percent is appropriate for this title.

The reason for this is simple: A higher volatility means bigger swings. However, by dropping your bet size by a relatively small amount, you smooth things out substantially. What’s more is that you still have chances to win the progressives. That’s because your bet size isn’t used to disqualify you from them like what you see with some progressive titles.

The queen in yellow pays out 150x for five of a kind. You can also score 100x for five of the witch in red or 70x for the princess in blue. Additionally, a win of 50x is yours if you get five of the golden sceptre. From that point, the dark queen earns players 30x for five, and five of the purple crown pays 20x.

Five symbols round out the lower end of pays. This includes the bright blue club and green diamond for 16x for five. However, wins of 12x are yours for five of the red hearts. Finally, the purple spades and golden shields pay 10x for five on a payline.

The overall concept is handled in a really cool way in The Queens Curse Empire Treasures online slot slot, as opposed to it just being a small detail like what you see in most games. Additionally, as a result of the large attention from so many people, this title has a perfect spot in Playtech’s portfolio overall.

In addition to that, the fun is only driven up by the great level to which the level of graphics fits the game’s theme. The style of play for this slot gives a tremendous amount of fun, and a serious number of features can be found in this slot, and that is something we can’t necessarily say for plenty of the competition.

Which online casinos have The Queen's Curse Empire Treasures?

What is the Return to Player (RTP) for The Queen's Curse Empire Treasures?