The Wolf’s Bane Casinos and Review 2021 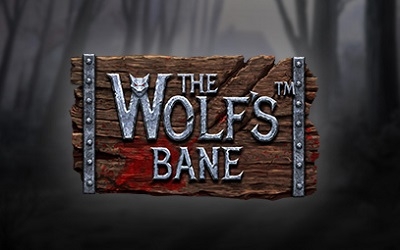 The horror-themed The Wolf’s Bane online slot is a game produced by Net Entertainment that brings players to the middle of a haunted town with all kinds of werewolves and other monsters around. This title has a free spins mode with multiple wild features available along with an additional bonus round.

Casinos with The Wolf's Bane

An Introduction to The Wolf’s Bane

Something that many players have noticed about the monster-themed slots in the industry is that they usually have a lighthearted approach instead of being taken seriously as a thriller. Net Entertainment decided to go in the latter direction with The Wolf’s Bane video slot.

Everything from the symbol set to the atmosphere, music and feature set come together to give players a more urgent sense of danger and not knowing what’s about to come around the corner.

The way the visuals are set up helps with this by having all of the reels be transparent on the background (not the symbols) so that you can see the foggy village behind everything with the full moon up in the sky looking ominous.

In terms of how the game plays, the regular game mode and the features give a serious amount of action, and the sound effects of winning fit in with the overall theme to make you feel immersed in this spooky scenario.

This title has a really straightforward format and betting setup that makes it really easy to pick out what you want in terms of your overall wager size. Here’s what to expect:

The pay table is pretty balanced in this game as well, and it gives things a fairly smooth level of swings with a medium-low volatility level. A whole lot of betting increments are available as well, and that makes it easy to find something that perfectly fits your bankroll management strategy.

It’s also worth pointing out that all of the wins in this game are line bet-based wagers, so you’ll be paid out in coin multiples instead of multiples of your total bet size.

This is a feature-rich title with a lot of depth. In The Wolf’s Bane video slot, you’ll see a lot of ways that the features come together to compound the amount of value they give you.

In the regular game mode, the only wild in the werewolf. He gives you some pretty solid payouts that include the following:

This 500x win is the largest single-line payout available in this game, so that makes it pretty notable. However, in the free spins bonus round, there are other wilds that make it easier to get other wins as well, but they all pay out the same (not including multipliers).

The scatter and bonus symbols cannot be substituted for by the wild, which is the industry standard.

The full moon is a scattered bonus symbol in The Wolf’s Bane online slot. Three or more will activate a free spins mode and give you the following numbers of free turns:

Note that these are true scatters, which means they will activate this feature no matter which positions or reels they fall on. Anywhere on the 5×3 grid of 15 spots will be fine for these symbols no matter how many you get to activate the feature.

During the free spins, you’ll randomly have one of four types of wilds on the reels. They include the following:

In addition to these random wild features, you’ll also get an overlaid wild that appears at random positions on one of the first three reels on every single spin. This will work like whichever wild feature you have for that particular free spin, which basically means extra guaranteed wilds on the reels.

As you can see this is an atypical way of handling extra features that show up during free spins, but it’s definitely something that’s welcomed. Players will have lots of ways to get bigger wins during this feature than they would get during the regular game mode because of this.

There’s a bonus symbol that appears on the first, third and fifth reels. It’s of a man wearing an orange scarf and holding a crossbow in front of a full moon.

When you get all three of this symbol anywhere on the first, third and fifth reels, then you’ll activate the Pick and Click bonus feature.

You’ll pick between the three bonus symbols to determine your prize in this feature. A different win based on multiples of your total bet size will be available depending on which one you choose. You can win 5x at the minimum and 50x at the maximum, and this 50x is on par with the largest regular win in the game, which makes it a pretty sizable prize.

How to Win at The Wolf’s Bane

There’s not much that you need to do in this game to increase your RTP in terms of bet size selection, changing numbers of paylines and so on. Instead, all you really need to worry about is making sure that you get yourself in at a bet size that will work for you.

To do this, keep in mind that the volatility is really low, so you can pick a size that’s a little larger than what you’d normally use and still have the swings be really low and reasonable.

Payout Structure for The Wolf’s Bane

The card rank symbols are styled to fit the theme really well. The A and K pay 100x for five of a kind, and you can earn 80x for five of the Q or J symbols.

Net Entertainment did a lot to make the atmosphere of The Wolf’s Bane video slot really serious without looking like they were playing around and making things funny. That’s a departure from what we typically see with horror-based titles in the slots industry, and it’s something that gives this game a feel that’s different than what you’ll find with most other slots in the sub-genre.