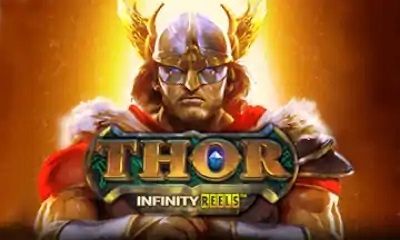 The Thor Infinity Reels online slot from ReelPlay offers four different big jackpots. On top of that, there’s an infinite number of ways to win. Other features are added in that give you more opportunities to get paid. Multipliers also come into play in a major way in this title.

An Introduction to Thor Infinity Reels

What it boils down to is the idea that there is no limit to the number of reels available.

We’ll get more into how that mechanic works down below. However, there are a few other things to note about this title’s gameplay. The features and jackpots add a lot of action on their own. They also play perfectly into the theme of the game.

No shortage of titles have been made about Norse mythology. Thor is a popular character for a lot of reasons, and he shows up here as well. However, ReelPlay was sure to put together this title in a way that makes a lot of sense. He’s not just here on the reels because he looks cool; it actually means something with how the game works.

The betting setup in this game is a really important part of the experience. It’s significantly different than any other common format out there. Here’s what to expect:

The volatility of this game is in the medium-low range. With the format working how it does, you get a lot of small and medium wins. Combined with a high hit-rate and balanced features, the volatility doesn’t get out of hand.

With the Thor Infinity Reels online slot, the feature set is really important. If you want to understand how the gameplay works when you start playing, knowing the features and how the payouts work in the context of the atypical layout and betting setup are key.

To begin with, the Thor symbols show up on all reels. They substitute for everything except for the hammer bonus symbol. It’s worth noting that they can count as different symbols at the same time to help get wins. Every potential winning combination is given with this wild.

Because of the way the Infinity Reels format works, you can get winning combinations that only consist of wilds. That’s an interesting side effect because if the reels create a wild combination, there’s always the ability for one extra reel to appear, and the string of wilds has to end at some point.

The hammer is the bonus symbol in the Thor Infinity Reels video slot. If you get six or more of them on the reels at once, then you trigger the Jackpot Re-spins. In this feature, you can win one of the four static jackpots.

When you get at least six of them, each one of the hammers will randomly give an instant payout. However, each of them also have a chance to award one of the four jackpots. They are not progressives, however, and they always pay according to the following:

On the left-hand side of the reels, you have an option to buy the bonus feature. It costs 100 times the price of your total cost per spin to do so. While you’ll recoup at least some of your payout from the feature being activated, you’ll need to decide on your own if it’s worth it for you.

The re-spins aspect of the feature essentially gives you opportunities to get extra hammers on the reels. Your prizes will be listed on the hammers in numbers of coins.

For players who want to buy the feature, we suggest trying it on the lowest stakes first. This will give you an idea of what the gameplay is like and what you can expect. It’s a cool way to enjoy the game, but it also plays in an atypical way that’s not quite like anything else out there. That’s why we suggest that players give it a try at lower stakes before jumping in at their normal level.

How to Win at Thor Infinity Reels

Adjusting your bet size is really the only strategic option you have for this title. We recommend going with a slightly larger bet size than your average. This is because of the high hit-rate and low volatility.

You don’t need to make an overly large adjustment here. Something in the realm of an increase of 33 to 50 percent will be plenty. You’ll get larger wins than usual, but your swings won’t be very bad on average because of the low volatility.

The payouts are determined in a little bit of a different way than most games. The Thor Infinity Reels video slot gives each symbol a core starting value along the following lines:

From there, the base win of a combination is determined by its length multiplied by the core value above. For example, three of a kind of the double axes is worth 15x. However, for each reel added beyond the third one, the multiplier is increased from 1x to 2x, 3x, 4x and so on. That means longer combinations get proportionately larger payouts.

For a simple example, suppose you get five of a kind of the Q symbol. That would normally be a 10x win since it’s 2x multiplied by five reels. However, the multiplier for the whole thing is 3x since two additional reels were added. That makes the overall payout 30x.

The Thor Infinity Reels online slot is a valuable component of ReelPlay’s overall portfolio because of its presentation and gameplay experience. In contrast with other titles that utilize related concepts, this online slot stands out in a number of areas instead of just being one in the same, and the feature set offers a number of different extra ways to take down a win in addition to the normal pay schedule offering.

The look and feel of this title gives an overall look that’s competitive with several of the best that the online slots industry as a whole has to offer. On top of that, everything is focused on fun with this title, and that is wonderful news for video slot fans who would rather have an action-centric style of play.