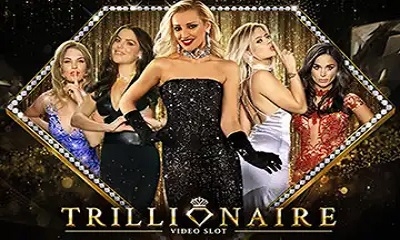 The Trillionaire online slot brings players straight into a high-class situation. Diamonds, fancy dresses and a cast of colorful characters give this game a great appeal. The feature set in this title also adds a lot of action that is rounded out by a top-heavy pay table.

An Introduction to Trillionaire

Wealth-based online slots have been around for a long time, so they’re nothing new in and of themselves. However, the Trillionaire video slot, available at NetEnt-powered online casinos, is a bit different.

This game attempts to be based around the types of things women tend to associate with wealth instead of the typical yachts, mansions and cards that are more associated with men.

It’s an interesting idea, and that means diamonds, jewelry and clothes are the forefront. Visually, that creates a compelling spectacle. It’s definitely in line with what we have seen work for other types of games from an aesthetic standpoint.

The gameplay isn’t ignored, however, and players are definitely given a lot to look forward to. It’s the feature set that really gets the attention on this end of things, and that includes top-heavy payouts. With that said, the volatility isn’t as entirely out of hand as you might expect. Most games with wealth-based themes tend to have much higher levels of volatility.

The layout of this game has been made about as straightforward as you’ll find. It actually uses what’s really close to the most popular format in the industry. Here’s a quick breakdown of what you need to know:

The volatility for this game is in the medium-low range. That’s very much on the low end for wealth-based games, and we enjoy seeing the diversity here. This helps to give players more of a choice in what they want in terms of their overall experience. However, wins are based on the total bet size. For example, a 50x win means you’ll pick up a payout worth 50 times the total amount of your wager.

When you play the Trillionaire video slot, you may get the sense that it’s poking fun at “The Housewives Of…” television shows and other reality television shows. That’s probably the case, or at least that’s what it feels like.

However, the features and gameplay are very much real and are very serious. A hit-rate that’s on the higher end of things combined with value-packed features are the focus here. Those are things that can fit with what any type of player will be looking for.

You’ll have five characters on the game board. Something that’s really cool here is that they’re all used as wilds. Each reel gets a wild symbol for one of the respective characters.

Since they show up on all five reels, you can get payouts along the following lines for wild combinations:

It’s also worth noting that these wilds always show up stacked. They’re stacked four high, so they can actually end up covering an entire reel. That makes it easier to hit these winning combinations. However, it also makes it easier for them to give you multi-line combinations in general.

Note that these only substitute for the regular paying symbols and not the bonus symbols.

The wheel symbols can show up to help you get into the Fashion Wheel bonus round. The way this works is that you’ll need three of the wheel symbols to trigger the feature. They are scattered bonus symbols and can show up anywhere on the game board for this.

Once it’s triggered, you’ll get taken to a second screen. Three wheels are shown, and you start off by spinning the outermost one. You’ll be awarded either an instant win or be taken to the next wheel. If you get to the next wheel, you’re given better instant payouts. However, if you make it past all three reels, you’re given a Mega Win.

They did something really cool with the Trillionaire online slot’s free spins mode. You trigger it by getting three of the free spins symbols anywhere on the reels at the same time. Before your free spins start, however, you get a choice of the five supermodel characters. This choice is which of the five will be turned into a wild for every one of them that show up on the reels.

Fundamentally, it doesn’t matter which of the five you pick. The free spins mode just introduces extra wilds onto the reels in this way.

Something else to note about this game mode is that it lacks low-level symbols. That means that it’s much easier to hit winning combinations in general. However, those wins will also be for higher paying prizes. As a result, the free spins are worth a lot more than the regular spins overall.

How to Win at Trillionaire

The Trillionaire online slot has a medium-low volatility. Because of this, you can adjust your bet size a bit. To do so, you’ll want to increase your bet size by somewhere in the range of 50 to 75 percent. While adjustments like this are obviously not mandatory, they’re generally ideal for games with a lower volatility.

There are two reasons for this. The first is that your payouts will be proportionately larger when you win. However, the second is that the swings still won’t be very bad most of the time because of the volatility being what it is. As a result, you get the best of both worlds.

Keeping with the wealth theme, the lower tier of symbols are made up of gemstones. They’re in the shape of the four card suits, however, and they look tremendous. The spade and heart each pay 20x for five of a kind. You can also earn 16x for five of the diamond or club symbols.

The Trillionaire video slot is a valuable part of NetEnt’s overall portfolio (despite being developed by Red Tiger Gaming) because of its level of graphics and gameplay style, and the thing slot fans will really love with this slot is the additional padding that the selection of features add to your account balance. The overall theme is put together in a really cool way in this slot, which is opposed to it only being an afterthought like what players see in most games.

The look and visual tone of this slot brings a lively tone that’s up there with most that the online slots industry overall has to offer. In addition to that, the gameplay style is overwhelmingly focused on action with a serious amount of ways to come out on top.