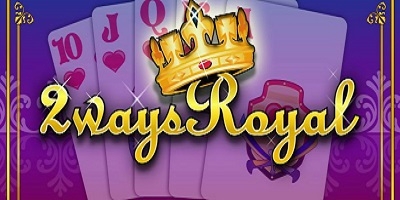 Getting a royal flush in video poker is always a big deal, and the Two Ways Royal video poker game makes it twice as likely by giving you another way to get a royal flush payout with 2-3-4-5-6 of the same suit counting for that top prize as well.

When you look at the divide between the two main sub-genres of video poker (wild and non-wild), what you often see is that the non-wild games can sometimes just consist of what’s essentially Jacks or Better with a little bit of different payouts. Two Ways Royal video poker is a big exception to that.

What makes this video poker game so much different is the introduction of an entirely new poker hand that changes the relevant strategies quite a bit.

With the introduction of the Low Royal Flush hand, you suddenly have to pay more attention when you have low cards in your hand instead of just disregarding them automatically while you zoom along on the auto-pilot of your learned “basic” strategies.

The dynamic created by this change is really interesting and makes the game a whole lot of fun. On top of that, you get to change up how you play and think strategically in situations that you wouldn’t otherwise get to, which is what makes the experience exciting for many fans of the genre.

The Importance and Role of Two Ways Royal

There are two factors that come together to make this game have a really important spot in an overall casino game portfolio at any given online casino.

First, this is often the game that will have the best top payout available if you play correctly. The payout rate is 99.80 percent for a house edge of just 0.20 with correct play, and that’s just an absolutely tremendous rate that really leaves a lot of room for big winning streaks.

One aspect of this that shouldn’t be overlooked is that the same pay table is used virtually always, which eliminates situations where you may have to settle for a lower payout if you want to play, a problem that you can sometimes find with other video poker styles.

Second, the strategies involved aren’t that much more complicated than Jacks or Better while yielding a house edge that’s a third or so of the size (depending on the particular pay table used for Jacks or Better). This makes it a title that many players would find useful to add to their repertoires for obvious reasons.

The way this game goes is very similar to other titles in the video poker genre, but we’ll offer a concise idea of how the gameplay goes here and what the rules look like to make things clear.

Here is how the basic gameplay procedure works:

So again, it’s not particularly complicated from a procedural standpoint, but there is a whole lot of strategic depth in choosing those discards correctly. That is the center focus of the gameplay overall.

The pay table is where Two Ways Royal video poker stands out as being a bit different and particularly innovative. There is a new hand added to this listing that isn’t a standard five-card poker hand, and that’s where the name of the game comes from.

You’ll almost always have the following pay table, and we have listed the payouts beside of the name of the hand for easy reference.

If you don’t make a good enough hand to get onto the pay table, then you don’t get a payout. It’s also worth noting that the volatility of this game is a bit higher than something like Jacks or Better because a lot of value was moved from the lower tier hands to make up for the big 800x win for the added Low Royal Flush hand.

From the most concrete standpoint, this video poker game is different because of the extra hand of the Low Royal Flush that gives you another way to win 800x instead of the usual AKQJT royal. However, the effects of this reach far beyond this individual payout.

Instead, it completely shifts how you have to think about your focus and the resulting gameplay. You can’t just zoom past through low-card hands anymore when you play this game like you would with many other non-wild titles. You can very easily miss three-card royal draws and other types of hands that are worth a lot of value if you play this way.

Comparatively, that makes the gameplay experience for Two Ways Royal all about presence of mind and staying in the moment instead of letting your unconscious mind take over and play automatically like you would on titles where you have a more standard strategy to play.

We have a more in-depth strategy guide for Two Ways Royal video poker here, but we’re going to look over the basics here very quickly.

Essentially, you want to play like you would in Jacks or Better for most hands that do not involve combinations of suited low cards. Despite the lower pays for flushes and straights in this game, you still value high pairs over flush draws, flush draws over low pairs, low pairs over straight draws and so on.

The real situations where you have to think differently is when you have two or more cards from ranks two through six that share a suit. When that happens, it’s like a big red flag goes up that you should pause for a moment, come off of auto-pilot and make sure that you’re making the right decision.

With Two Ways Royal, you can get a different degree of strategy than you have with many non-wild card video poker games. While it’s a bit more in-depth, it’s not as difficult to learn as most wild card games or even blackjack titles, so it’s right in the sweet spot for players who like other games that have a lot of strategy but without it being too ridiculously complicated.