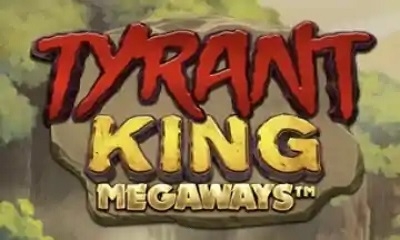 The Tyrant King Megaways online slot might sound like it’s about knights from the Middle Ages. However, it’s actually about the T-Rex and other dinosaurs in a fun explorer-based adventure. You can have over 100,000 ways to win in this title on top of plenty of features that hit frequently.

An Introduction to Tyrant King Megaways

Dinosaurs have been used as the basis of a variety of slots. However, we’ve never seen something quite like what iSoftBet has brought to the table with the Tyrant King Megaways video slot.

That’s because action is the name of the game, and they have brought it on a major level.

The gameplay is simply outstanding. Tons of ways are available to win during the main game. While a big part of that is the Megaways format, a lot of it is also from the value-oriented features. You’ll have features hitting frequently and giving you extra ways to get paid. Additionally, you have features that hit a bit more occasionally but that give opportunities for even bigger payouts.

Along with the great gameplay are really solid graphics. Everything has obviously been handled with a lot of care and attention to detail. Additionally, it uses a style of drawing that’s a bit different from anything else in the sub-genre. An animated background has dinosaurs shooting in and out of bushes and from behind trees as well. Overall, the presentation as a whole really pulls you into the game and immerses you in the play environment.

As we mentioned above, the layout is important to the gameplay. That’s because it offers a tremendous number of ways to get paid. In what follows, we’ll show you what to expect:

This game has a medium volatility overall. The hit-rate is above-average, however, which helps to keep the swings from being too severe. Additionally, you’ll find that all of the payouts we talk about here are listed as a multiple of the total amount that you wager. This keeps everything easy to understand instead of using coin-based systems that can get over-complicated in a hurry.

We really like the feature set of the Tyrant King Megaways online slot. It brings so much action to such a fun theme. On top of that, the features make sense in the context of the theme itself. That creates a higher level of immersive action than what you see when the game’s concepts and features are somewhat disjointed.

The name of this game is actually named after the T-Rex. Since it shows up as the wild symbol, we feel like that makes plenty of sense.

In this title, the wild symbols do not get winning combinations on their own. That’s because they don’t show up on every reel. Instead, you’ll only find them on the second, third, fourth and fifth reels only. However, they will substitute for any non-bonus symbol to give you winning combinations. In this way, they’re super helpful and valuable, especially with the Megaways layout.

After every single win, you activate the cascading wins feature. It’s really straightforward and gives you more ways to get paid.

What happens is that you’re paid out first for your wins. From there, all of the symbols that are a part of winning combinations disappear. This leaves empty space that’s then filled by more symbols falling from above. That gives you more opportunities to get wins, which is much like a free re-spin feature.

What we really like is that you can win over and over with this feature all on the same paid spin. That’s because the process continues in the Tyrant King Megaways video slot until you have a cascade with no wins.

If you’re able to score a wild symbol on the middle four reels all at the same time, you activate the Wild Tyrant Re-spins feature. When this happens, the first and sixth reels close off. Additionally, all non-wilds disappear after any payouts were made. The reels will spin with only wilds and blank spaces on them to give you new chances to get wilds on the reels.

You start with three re-spins. Each wild that lands on the reels resets this number back to three. From there, you have opportunities to try to fill the reels to get instant payouts. This is a cool feature that incorporates the theme in a way we haven’t really seen done before.

When you get four bonus symbols, which are fossilized eggs, on the game board, you trigger a set of free spins. These bonus eggs only show up on the second, third, fourth and fifth reels, much like the wilds.

Triggering this feature always gives you 10 free spins. During this feature, an additional horizontal reel is added to the bottom of the game board. With this in place, you get an extra symbol on the middle four reels. As a result, it’s possible to have over 200,000 ways to win on a single spin in this mode.

Every time you get a cascade win, the multiplier increases by a factor of 1. This new multiplier then applies to future wins until the feature is over. There’s no limit to the size of this multiplier.

Moreover, every single bonus symbol you get during the free spins will add one free turn to your total.

How to Win at Tyrant King Megaways

With a medium volatility but a high hit-rate, there’s not a lot to adjust to in this game. Since you also don’t have to worry about wagering certain numbers of coins or betting on specific numbers of paylines, you don’t really have any way to hurt your RTP percentage.

Along these lines, our suggestion is as follows. Start off with a bet size that’s around the average of what you’re comfortable with. If your average size is between two of the available values, you can start on the lower of the two while you learn the game. However, because of the higher hit-rate, the swings won’t be particularly severe on average. Because of this, you can increase it to the next size up without much worry on the volatility side.

The explorer-looking man with a brown hat on is the main symbol in this game. He awards you a 50x win for six of a kind. Since he appears stacked frequently, that can end up being a much larger payout. This is because you can be hit with a six of a kind combination in several ways at the same time. He’s also the only symbol that gives a win for only two of a kind; the rest require at least three. The woman with the bone daggers is next with 7.5x for six.

From there, you have three dinosaurs with different color schemes. The blue and green each pay 2x for six of a kind. Additionally, you can pick up 1.75x for six of the orange-themed one. That lives the card rank symbols A, K, Q, J and 10. They pay ranging from 1.75x down to 0.8x for six of a kind combinations.

A wide range of extra features are used in the Tyrant King Megaways online slot, and that is something we can’t assume for much of the competition. The feature-centric gameplay of this video slot is targeted toward giving video slot fans a tremendous degree of fun, and the overall concept is handled in a particularly cool way in this slot, compared to it just being an afterthought like what we see in virtually all video slots.

Due to the fact that this game brings a high level of quality while still standing out individually, this video slot fits tremendously in this developer’s selection of slots as a whole. It’s also worth noting that the graphics level of this game is top-tier and enhances the whole style of gameplay.

What is the Return to Player (RTP) for Tyrant King Megaways?