Who Wants to Be a Millionaire Megapays 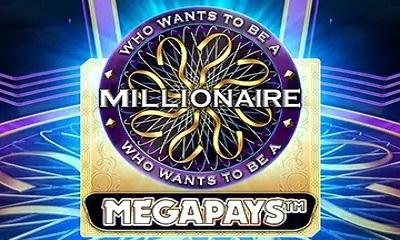 Based on the game show with the same name, the Who Wants to Be a Millionaire Megapays online slot from Big Time Gaming offers four progressive jackpots and a number of other exciting bonus features based around the show.

Casinos with Who Wants to Be a Millionaire Megapays

An Introduction to Who Wants to Be a Millionaire Megapays

This is definitely one of the best slots out there based around a television game show.

The presentation of this title is all about the television set. You can see the iconic miniature arena in which the game plays out. The “hot seat” with the host’s seat are in the middle of the floor. On top of that, you can see the dimly lit audience area around the set as well. Additionally, the gem-based symbol set fits the wealth theme pretty nicely. We like how they have tied everything together from a visual standpoint.

Another aspect of this game that’s so well done is the gameplay. The hit-rate is really high thanks to the Megaways format, which was invented and patented by Big Time Gaming. Additionally, you can see the available progressive jackpots lit up above the game board. This has led to a slight shift in how the Megaways format is laid out. While that by itself doesn’t affect much from a practical standpoint, it shows how they’ve meshed together the gameplay elements and the payout structure.

The Best Casinos for Who Wants to Be a Millionaire Megapays

Any casino site that offers the full selection of titles from Big Time Gaming will have this slot available. It can take a lot of time to research which of those are the best options for you. However, we have done all of the research for you with our reviews of the best Big Time Gaming casinos.

With the way we have things set up, we offer the information that you need to figure out which of them will be the best fit for you as an individual. This avoids a faulty “one size fits all” approach to recommending online casinos. You can find sites that have other games you want to play, promotions that fit your play style and stakes, mobile options that work for your device and more with these reviews.

The layout is a really important part of how this game works. It can be slightly anti-intuitive if you start out without knowing how it functions. However, it’s easy once you know what’s going on. Here’s what to expect:

To keep things as easy to understand as possible, they’ve made all of the wins multiples of the bet size. That means you don’t have to worry about numbers of coins, coins being wagered, the value of coins, etc.

Additionally, we need to point out that this is a high-volatility slot. The hit-rate is deceptively high here because of the format, which is nice. However, the huge amount of value tied up in the features and jackpots drive the volatility up quite a bit.

You can’t really have a game show-based slot without a lot of features. This is definitely something that the Who Wants to Be a Millionaire Megapays online slot does right. However, we’ll walk you through all of them and how they work in the following. This will help to keep you from feeling like you’re lost at any point while playing.

You’ll notice that there are four symbols at the bottom of the gameplay area set aside from the rest. This is called the extra reel in this format, and it runs horizontally instead of vertically. However, it just gives you another symbol to win on for the second, third, fourth and fifth regular reels. You don’t actually have to do anything specific or know anything about it. Many players would just wonder what it does since it looks different than the rest.

On every single spin, you’ll have a chance to trigger the reaction feature. This triggers on every win in the Who Wants to Be a Millionaire Megapays video slot. All winning symbols disappear. From there, new symbols fall down into place until the game board is full again. You’re given another opportunity to get wins along these lines.

If you hit wins once again, then the process continues. There’s no maximum to the number of reactions that you can have in a single paid spin. However, the reactions cost nothing and are essentially a form of free re-spins.

The Who Wants to Be a Millionaire Megapays logo is the scatter. It appears on all four reels, effectively, in the extra reel slot only. However, you only need three to trigger the free spins mode for eight free spins. This mode is based on being in the “hot seat” from the game show.

During the free spins, you start with a multiplier. This increases once every reaction to give you better payouts. Also, getting scatters in the extra reel during this game mode gives more free spins. Three will give four additional free spins. However, filling the extra reel up with four scatters adds eight free spins to your total.

When you start your free spins, you have the option to gamble them. This feature is based on the game show, and it gives chances to win up to 50 free spins. You are basically given chances to pick between four answers. You also get the three extra options to narrow down your choices. On top of that, you can get “safety” rungs on the second and seventh that guarantee you a minimum of 10 or 20 free spins, respectively. Again, this mirrors a similar idea from the game show.

You’ll see the four Megapays jackpots at the top of the game board at all times. On any given spin, you can trigger the Megapays feature. This picks one of the card rank symbols as the Megapays symbol, and on that turn, you’ll be given a re-spin if you get at least one of them. These accumulate until you get no more new symbols, and you’ll win one of the four jackpots if you accumulate at least four of that symbol.

The values for the jackpots are as follows:

These jackpots increase over time until someone wins them.

How to Win at Who Wants to Be a Millionaire Megapays

The volatility is high in this game, but the hit-rate is high as well. Usually these two things are opposite, but the atypical format and feature set switches things up a bit. Our recommendation is to choose a bet size that’s around the average of what you’re comfortable with and then go one level lower. This will help you to mitigate the swings a bit without dropping your bet size too much.

Payout Structure for Who Wants to Be a Millionaire Megapays

Four gym symbols make up the major payouts for this game, but it’s particularly top-heavy. This ties in with the high volatility. The purple diamond symbol is a good example since it pays 50x. However, it also pays for just two of a kind, and it’s the only symbol to do so.

The red octagon gem pays out a win of 7.5x for six, which is a huge drop from the top win. The blue and green gems will get you 2x each for six of a kind combinations as well.

As a part of this software developer’s selection of games as a whole, this is a title that fills a key position because it is a great fit to a whole lot of players. A good number of bonus features are used in this slot, and that is something players can’t say for much of the competition, and the action is only amplified by the great degree to which the level of graphics perfectly fits the slot’s driving concept.

Everything is about excitement with this slot, and that’s great news for slot fans who prefer an action-centric style of play. In addition to that, the overall concept is put together in a really cool way in this slot, which is opposed to it merely being an afterthought like what you see in virtually all online slots.

Which online casinos have Who Wants to Be a Millionaire Megapays?

What is the Return to Player (RTP) for Who Wants to Be a Millionaire Megapays?

Who Wants to Be a Millionaire Megapays News

Who Wants to Be a Millionaire Megapays Jackpot Awards €1 Million
November 1, 2021