Age of the Gods Roulette 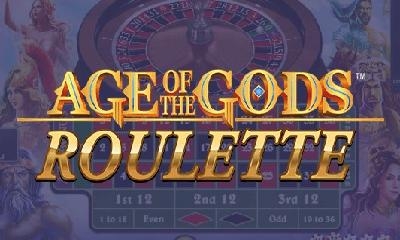 Playtech’s Age of the Gods Roulette live dealer game brings players into a land of Greek mythology with a wonderful visual appeal that looks like it’s straight from Ancient Greece. You can win six figures in this game with the top jackpot, but four progressives are available overall with chances to win other payouts on a bonus mini game.

Casinos with Age of the Gods Roulette

An Introduction to Age of the Gods Roulette

Progressive jackpots can be added to almost any game in an online casino, but we don’t see them very often on the live dealer side of things. Playtech broke with this tradition with their live dealer Age of the Gods Roulette game.

This title ties into their popular four-tier Age of the Gods progressive jackpot system that allows players to win life-changing sums of money on a single spin of the wheel.

While the underlying basics of this game lie in European roulette, there are some extra aspects to this title that don’t have a precedent because they’ve never otherwise been used in a live dealer roulette game.

Along these lines, there are opportunities to win more than you otherwise would, and that’s something that adds a lot of excitement to something that’s already one of the most popular table games of all time.

First and foremost, we want to talk about how this game is set up visually because it’s so different than what you’ll find otherwise in the live roulette world. Since it’s based on the Age of the Gods progressive series, which is all centered around Greek mythology, Playtech made sure that this game’s aesthetic values fit the overall concept.

Along these lines, you’ll be playing on a stone table with an ancient Greek background and a dealer dressed like someone from those times. It gives this game a much different feel than you’ll get from anything else.

The gameplay for the Age of the Gods live roulette game is fairly straightforward, but it has some parts that are atypical and that do not fit with the rest of the game flow. We’re going to walk you through it all here so that you know exactly what to expect.

Everything for this title happens within the following basic procedure. Where we step out of this procedure for bonuses and giving payouts, we’ll break down what you need to know for those portions as well down below.

With that said, here’s how the game flows normally:

There’s not a lot to the gameplay in terms of learning special rules for how the procedure goes, but between the betting and the bonuses, there is still a lot of depth to this game.

Age of the Gods Bonus Round

With a bet placed on the bonus position, if the wheel selects that position, then you activate this bonus round. Keep in mind that this is not where you’ll have access to the jackpots. Instead, it’s a special feature designed to give you an opportunity to pick up bonus pays.

Eight symbols are on a pay table for a miniature three-reel slot that appears on a second screen. You’ll get three spins on these reels, and you can win with combinations that offer payouts ranging from 5x to 100x. These are multiplied by the total bet that was placed on the bonus position.

Note that any regular wins from the triggering roulette spin will be paid as usual, but you’ll only be playing the bonus round afterward, and the regular game mode will proceed on normally for the other players since no one has to watch or wait for each other to finish bonus features.

Once the feature is over, you’re sent back to the usual screen, and you get to hop right into the normal game mode once again.

Age of the Gods Jackpot Feature

The triggering of the jackpot feature is completely random as long as you’re making a real money wager in this game. Your chances of triggering the feature are proportionate to the size of your total bet on the given spin, and that helps to keep things fair between players at different levels of stakes.

Players have an opportunity to win massive payouts with this feature, but no regular win or certain result of the spin of the roulette wheel is required to get into this bonus round.

The way this works is that you’re given a number of gold coins on a second screen bonus feature. You’ll select from them at random until you get a set of matching symbols. When you get a matching set of symbols, you’re given the jackpot that corresponds to those symbols.

The four jackpots are listed as follows with their starting amount when they reset:

What’s really cool here is that the Ultimate Power jackpot frequently hits above the half-million mark, so it’s truly a life-changing sum of money that you’re dealing with if you pick up a win.

Note that the lower jackpots hit more often than the higher ones, so those bottom ones are worth more value than what their seed values listed above would otherwise indicate.

Aside from what the Age of the Gods tie-in has to offer here, there are other bets that are a normal part of the roulette experience here. This is a single-zero game, which gives a solid payout rate on its own as well.

There are two categories of bets that you can make at the Age of Gods Roulette tables online, and we’ll break them down for you here briefly.

The outside bets are everything that’s shown outside of the main grid of numbers, and that includes everything below the grid on the betting interface as well as the three squares to the right-hand side.

There are two groups of wagers available within this category. The first are the even money wagers, and they include the 1 to 18, 19 to 36, even, odd, red and black bets. Note that none of these win on a green 0, and that includes the even bet. They all pay out at 1:1, so if you wager €10 and win, you’ll profit €10 on these wagers.

The inside bets are when you place your chips on the actual grid of numbers. This is the part of the game that most new players feel the most unsure about, so we’ll break things down as clearly as possible.

That can all be a little confusing in the abstract, so here are concrete explanations of each of the most commonly used inside wagers and their names and payouts:

What’s interesting about all of these bets is that the chip placement is what chooses which cluster of numbers you’re betting on, and once you understand how it works, it’s actually a very simple and refined system that avoids extra complications of multi-spot bets.

There are some other options in the Age of Gods live roulette game that make things a bit more convenient.

One of these is the history panel that shows all of the previous results of the past several spins. This gives you some statistical information as well including where the “hot spots” have been for various places on the wheel, and you can use this information or completely ignore it however you want to decide on your bets.

Because it shows information on the Age of the Gods progressive jackpots as well, this is a tab that you should at least check out to see how it works because it’s fundamentally different than similar features for other games.

You also have an autoplay feature that has a tremendous number of options and that’s very useful for hands-off play. You can set rules to have it play the exact same way you would manually in most cases, which is really cool for people who want a more relaxing experience.

How to Win at Age of the Gods Roulette

There are two components for strategy for this game, and while they’re both important, you’re not bound to either of them.

The first is for the regular bets and wagers. Thankfully, this game uses standardized single-zero roulette payouts for those, which means every single bet that you can make in the game on the regular pays have the exact same house advantage. That means you can’t make betting mistakes along these lines.

The second is for the progressive, which you don’t actually need to worry about too much because there’s no particular winning combination or anything along those lines that has to happen for you to win. Instead, you have a random chance to win just for playing.

If you like live dealer roulette, then the Age of the Gods live roulette tables are something you should absolutely take a look at because it has all of the advantages of the more typical European roulette tables while adding in extras that you wouldn’t get otherwise. The opportunity to win a six-figure jackpot on every single real money spin that you take is an obvious perk to this sort of thing, but the slot-based bonus feature is also a nice touch.

Which online casinos have Age of the Gods Roulette?