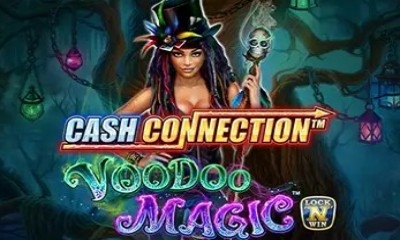 In the Cash Connection Voodoo Magic online slot, you’re taken out into the woods to see if you can conjure up some big wins. With two progressive jackpots and a value-packed locking scatter re-spin feature, Novomatic made it a point to make this game all about going after huge payouts.

An Introduction to the Cash Connection Voodoo Magic Slot

Each type of culture tends to have their own magical traditions. Some of them have different things in common even if the cultures never came into contact. As such, it’s easy to see how this fascinating with the magical is a very human thing. In the Cash Connection Voodoo Magic video slot, we see how easily it is to draw comparisons to the motifs of other magic-based titles like Wild Witches.

Even though the graphics, theme and gameplay are all different, the essence of the magical nature of the subject matter remains. This is what connects with players so much in titles like this one.

When you first take a look at this game, you can feel the voodoo vibe. A lot of this comes from the symbol set, which focuses on voodoo dolls and a voodoo witch doctor. However, Novomatic also tied in the value aspect of the game where you’ll be shooting for big prizes. They did this by piling up huge gold coins in the background while you’re surrounded by a dark forest. Ancient stone markers are around as well, which really drive the feeling home.

As we’ve alluded to, the gameplay is about chances for larger payouts primarily. At the same time, the hit-rate is pretty reasonable due to how the format itself is set up. Regardless, this is more of the type of game for players who care the most about opportunities for sizable wins.

We mentioned above that the layout is designed to give players a pretty solid hit-rate. That’s because it uses the most common type of “all ways” approach to award wins. In the following, we’ll show you what you need to know and what to pay attention to if you want to be mindful of the current levels of the jackpots.

In most cases, games with a high hit-rate have a pretty mild volatility level. However, this title is an exception to that. This is because of the dual progressive jackpots, the value-packed regular pay table and the main bonus feature offering such a concentrated amount of value all in one place. As a result, you can expect a medium-high volatility level that’s a good bit above the average. While we wouldn’t categorize it as high, you will definitely average having bigger swings than usual.

Something worth pointing out here is that wins are multiples of the bet size overall. For example, if you’re betting €5 per turn and hit a 5x win, that’s a prize of €25 for that one winning combination. Additionally, note that with the all ways format in place, it’s common to get multiple wins for the same symbol types simultaneously. As such, don’t let the values in the pay table throw you off from the prizes you can expect from a practical standpoint.

The gameplay for this slot is pretty intense. A lot of the focus is on going after chances for some really big prizes. In comparison to other magic-themed slots like Beriched, the Cash Connection Voodoo Magic online slot is definitely a bit more fast-paced. Keep that in mind as you look through our breakdowns of the following features and game mechanics.

In the regular game mode, the first symbol to look for is the voodoo witch doctor. She appears wearing a sort of black top hat, and she is the wild symbol. However, she only shows up in this game on the second, third and fourth reels. You won’t find her on the first or last reels, and subsequently, she doesn’t give her own payouts and prizes.

Instead, her primary functionality is helping to substitute to create other wins. Since the 243 ways layout is in effect, it’s easier for her to do these substitutions than what you see in a traditional payline-based slot. That means she brings more value than it may seem initially since she doesn’t give prizes out solo.

We also need to point out that the wild substitutes for almost everything. The golden coin scatter symbol is the only one she doesn’t substitute for in this slot.

Scattered Gold Coin Symbols and the Lock and Win Feature

The golden coin is a bonus scatter that can appear on all five reels. However, it’s only used to trigger the primary bonus feature. You will not receive payouts from the coins during the regular game mode.

When you get six or more of these on the reels at once, you activate the Lock and Win feature.

The Lock and Win feature begins with three spins. Each scatter that you used to start the feature is held in place, as are all subsequent coins that can land during the feature. From there, each spin in this feature offers blank spaces or scattered coins. Of course, these are available only in the positions that don’t already have them.

Additionally, you can end this feature in two different ways. The first way is to simply run out of spins. However, each additional spin with at least one extra coin added that you didn’t have before resets your spins back to three. The second way to end the feature is to fill the board with coins.

At the end of this feature, each individual coin’s value is added together and awarded as a lump sum. These individual coins are worth 1x to 100x. Therefore, your total prize before any jackpots can be as high as 1,500x in total.

A total of four jackpots are available in this game. However, two of them are progressive while the other two are static. Here is a quick overview at the jackpot set:

For the mini, minor and major jackpots, they’re won at random in the Hold and Win feature. This is pointed out by getting a matching label on one of the golden coin scatters that land.

However, for the Grand Jackpot, a different standard is required. To land this jackpot, the entire 15-spot board has to be filled with gold coins. If you pick this up, then you score the total value of all of the coins combined in addition to the value of the Grand Jackpot in the Cash Connection Voodoo Magic video slot.

How to Win at Cash Connection Voodoo Magic

With its moderate progressives and value-packed feature, this is a game with a volatility higher than average. To compensate for the larger than usual swings, our recommendation is to simply lower your bet size by one or two betting levels. You will still qualify for the jackpots since no minimum wager is required. However, things will go a bit smoother with respect to the bet size you started with.

Two different voodoo dolls in different colors make up the top two payouts. Each of them can give you 5x for five of a kind in green or purple. From there, the shelf full of different types of potions will pay out 3x when you line up five matching symbols. Additionally, five of the photos and maracas symbols can get you 2x wins.

A pretty standard set of card rank royal symbols are used for the lower pays. Novomatic went with purple A and red K symbols for 1.5x wins for five. However, five of the yellow Q, blue J or red 10 symbols result in prizes worth 1x.

The online slot world has a few voodoo-based games that have been done pretty well. One of those is Voodoo Magic by Pragmatic Play. Despite the names being similar, and given that we don’t want to take anything away from it, we still believe that the Cash Connection Voodoo Magic slot is the best in the sub-genre that we have seen.

We say that for a few reasons. First, the presentation is interesting and a bit different than what you’d expect. It has a slant toward using the presented magical powers in a way that generates wealth. Additionally, the feature set is all about a really strong Hold and Win feature that ties into some jackpots. Finally, we have the jackpots themselves, which include a mix of progressive and static payouts.

When you put all of that together, it’s really the total package to say the least.

What is the Return to Player (RTP) for Cash Connection Voodoo Magic?