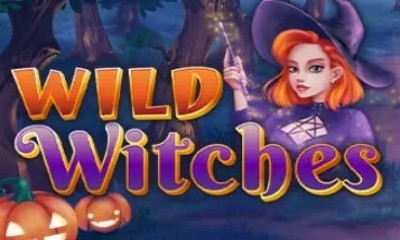 When you step into the world of the Wild Witches online slot, you step into a world of magical wins. Amatic Industries has created a play style and presentation here that go together well and bring out a lot of magical wild-themed action with plenty of ways to get more wins than usual.

An Introduction to the Wild Witches Slot

The concept of witches has been used in so many slots over the years that we couldn’t name them all if we tried. As such, a number of tropes and common patterns in this sub-genre have emerged over time. This includes games like Rags to Witches that pull wealth-based concepts into the fold. However, Amatic Industries put their own ideas into the Wild Witches video slot, and by the name of the game, you can probably guess what it’s all about.

The wild symbols and features along with the witches who facilitate them are the stars of the show here.

When we first opened up this game, we were struck by the graphical style. The soft animation used here isn’t something you see very much. However, it looks absolutely amazing. It allows for a glow effect that enhances the idea of being out in the moonlight. You see a soft and fun scene in the background with jack-o-lanterns and a small house in the woods in the background. Additionally, on the reels, you see a variety of symbols drawn in the same style.

As the name implies, wild symbols are a critical part of the gameplay here. In fact, pretty much the entire title centers around them in one way or another. We like the idea of a slot having a central theme both in terms of presentation and in terms of gameplay coherence. As such, both the aesthetic appeal and practical play sides of the equation come together really well in this one.

Different formats of different sizes have been used a lot over the years. However, some of them are better suited than others for what Amatic was going for here. We think the grid size and number of lines they went with were both a good call. What you’ll find is that the format of this game accentuates the gameplay and features quite a bit. Accordingly, here’s what you can expect from this game’s layout:

The format here is fairly common, and many players may have seen it before. As such, it’s the kind of thing where experienced players may understand the idea of why it’s used here. However, if you don’t see that right away, then don’t fret. We’ll break it down for you below.

This game’s layout is important because it packs a lot of paylines in a relatively small space. Additionally, the extra row of symbols compared to traditional 5×3 video slots allows for more room for features to operate. As the name of this slot suggests, wild-based features are a key element of what you’ll get here. Having that extra room just gives more screen real estate for the features to play out.

As such, the volatility level of this game comes to be a little below average. Amatic’s emphasis on wild-based features helps with this a lot. That’s because it both increases the frequency of your hits while also increasing their average size. However, without any individual jackpot or bonus feature that ties up a whole lot of value in one place, it has nothing pulling the volatility strongly upward either.

One more thing to note is that the wins in this game are coin-based. For example, a 100x win means you win 100 coins. Additionally, you can ascertain the size of the coins used in your wager by dividing your total bet size by 40. This is pretty common for 40-payline slots, so we aren’t surprised they went with it.

Gameplay and Features for the Wild Witches Video Slot

In somewhat related games like the Sirens Cove online slot, you run into situations where the play style is centered completely around a set motif or mechanic. This approach was also used in the Wild Witches online slot. Moreover, we think that Amatic Industries went the extra step of making it really straightforward and easy to understand. We can definitely appreciate the clarity of such an approach. In what follows, you’ll see how easy it is to jump in and play this title as a result.

The title of the game gives away that the witch is in fact the wild symbol in this game. However, you’ll find that this title actually has more than one witch. On top of that, they aren’t even the only wilds. We’ll get more into that down below.

What you need to start off knowing is that the wilds show up on every single reel. Since they appear on all five reels, they also give strong payouts on their own. Here’s a look at what the wild payouts have to offer:

Something worth noting is that the four of a kind win isn’t that much lower from the five of a kind payout. We mean that in comparison to what we normally see for top-paying symbols in slots. This is important to point out because it reflects the below-average volatility of the game as a whole.

When the double-sized witch in black appears, she triggers the Pumpkin Transforms Feature.

For each of these witches in black, two randomly chosen non-wild symbols are transformed into pumpkins. All of the pumpkins are wild, and they can combine with witches to make wild winning combinations.

Additionally, these pumpkins also have a chance to be wild multipliers. They can show a 2x or 3x at random, which will multiply any win they are a part of by the shown amount. This is a cool feature that hits more often than most and provides a pretty serious opportunity for larger wins than usual.

How to Win at Wild Witches

The primary thing that players should keep in mind going into this title is the volatility level. It comes in around what we would call the medium-low range. Alternatively, you can simply consider this as being below-average. Regardless of how you describe it, the idea is the same. Your swings will be less severe and less often than what you typically see.

If you like this ultra-smooth style of play, then go with your typical bet sizing. However, if you prefer games with a bit more volatility, then we recommend considering a betting adjustment. The type of adjustment that will effectively increase the volatility (with respect to your original bet size), is a small increase. Additionally, keeping it in the range of 25 to 33 percent more is about as high as you want to go. If you go any further than that, then it can start to get out of hand.

We’ve already looked at the wild payouts up above. However, we want to point out that this includes the witch in green, the double-sized witch in black and the pumpkin symbols. Note also that the wild pumpkin multipliers can create situations where the wins you can receive are 2x or 3x of the following values.

Up top, we have the cauldron symbol, which pays 200x for five of a kind. From there, two different animal symbols pay 100x for five on a payline. These are the black cat and the brown owl. Additionally, we want to point out once again just how super solid the graphics are and how great everything looks glowing in the moonlight with this soft animated style.

Amatic kept things straightforward and simple with the card rank symbol payouts. For the red A and blue K symbols, five of either gets you a 50x win. However, things drop down slightly to the 25x level for five of the purple Q or green J.

We like how the witch slot sub-genre allows for a lot of innovation and imagination. From the way the games are presented to the features, titles like the Wild Witches slot and Beriched are excellent examples of how providers can bring their own styles to the table in such an open concept.

However, in this game in particular, it’s the soft graphics and wild-based gameplay that stands out. You get a great feeling of being able to relax and enjoy the witchy atmosphere from this combination as well.

Which online casinos have Wild Witches?

What is the Return to Player (RTP) for Wild Witches?