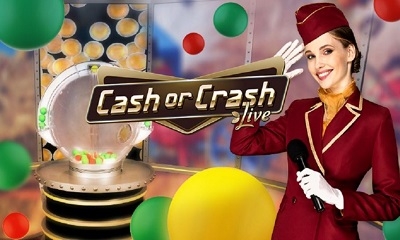 In September 2021, Cash Or Crash by Evolution Gaming took off on its maiden voyage. Set on board a blimp, the aim is to fly as high as possible, aiming for a 50,000x payout in the Gold Ball bonus round. On this page, we’ll explain the Cash Or Crash rules and walk you through its different features.

Casinos with Cash Or Crash

An Introduction to Cash Or Crash

With presenters dressed as flight attendants and pilots, the theme of this game is unmistakably one of air travel. But rather than boarding a plane, we’ll join the team on the Evolution Gaming blimp. Our journey takes us over the same city seen in the Monopoly Live and Crazy Time games from the same supplier.

Balls are drawn from a lottery-style machine in the centre of the blimp, which dictate how high we travel. Players must decide at which point to abandon the trip, before the blimp inevitably crashes. If you manage to bail out before disaster, you’ll win real money for your efforts. But if you delay too long, your bets will crash and burn!

Join the charming Evolution Gaming flight attendants as they soar high above the city towards a 50,000x maximum payout.

Rules of Cash Or Crash

The Cash Or Crash rules are pretty straightforward. After a short round of betting, a ball is drawn from a machine, much like you would see in lotteries around the world. But instead of numbered balls, you’ll see 28 different colours.

These balls determine how far we’ll travel on our journey along a payout ladder featuring 20 increasingly large multiplier steps. Depending on the colour of the ball pulled from the drawing machine, our blimp could take off. However, if it fails to get off the ground, all bets are losers.

But if we do manage to take flight, players are faced with a series of simple choices. You can take the money and run, you can continue and hope to travel further, or you can take half of the cash.

There are 28 balls inside the Cash Or Crash lottery drawing machine sitting in the middle of the blimp. Each colour has its own function, which we’ll get to shortly. The balls are split as follows:

Whenever a ball is pulled from the machine, one of the following actions takes place:

The further along the payout ladder we travel, the greater the rewards. The maximum possible journey length is 20 steps, where it’s possible to achieve a top prize of 18,000x. However, if the Gold Ball is drawn, that increases to a massive 50,000x!

One of the 28 balls in the drum is always a gold coloured ball. Whenever this is produced instead of a red or green ball, the Gold Ball bonus round begins. If this happens to be the first ball on the journey, there’s always a chance of winning the top Cash Or Crash prize of 50,000x.

At the beginning of the bonus round, we receive a shield. This is essentially an extra life, protecting us from the crashing effect of a red ball. Otherwise, the gameplay continues as usual, only without the decision making. Green balls produced by the machine simply take us one step further along the prize ladder and balls are drawn until a red appears.

At that point, the shield is broken, which means two things. First of all, the game will continue. But any subsequent red balls will now cause the blimp to crash and end the bonus game. Secondly, it has an impact upon the payouts. As soon as the shield is broken, you’ll notice that the multipliers on the usual payout ladder are enhanced.

There are 20 steps on the payout ladder. At the lower end, the returns are nothing spectacular, but the further you travel, the more generous they become.

As we mentioned earlier in our Cash Or Crash review, there are also enhanced payouts when playing the Gold Ball bonus round. Once the shield is broken, the multipliers increase.

The table below shows both of the Cash Or Crash paytables. The first column is the regular payout ladder, as well as the Gold Ball bonus ladder before the shield is broken. The second column illustrates the payouts in the bonus game once the shield is removed.

Cash Or Crash is a very basic game, which is not overcomplicated by unnecessary features or gameplay mechanics. The studio set is fairly simple, built around a single lottery-style drawing machine, while the betting layout is also straightforward.

Like most live dealer games, there’s an option to chat to your fellow players and the game hosts. There’s also a row of chips visible towards the foot of the screen, which is where you’ll place your bets. Use the 2x button if you want to double the existing wager size.

To the right of the betting chips is a recent draw history. This displays the last eight results, but will expand to the previous 24 if you click on the graph symbol. It’s possible if you prefer, to change the screen setup so that you may view the last 63 results. Though doing so greatly reduces the size of the main game show window.

A red circle with an X indicates that the first ball produced was red, so the blimp never took off. A green circle with a number shows that the game reached a specific payout level. For instance a 4 means that four consecutive green balls were drawn, reaching the fourth level of the prize ladder.

A gold shield means that the Gold Ball bonus was triggered in that round. While the number inside the shield also indicates how far along the journey the blimp travelled.

Okay, let’s quickly run through an example round of this game show to help you understand the flow.

How to Win at Cash Or Crash

This live casino game from Evolution Gaming puts the decision into the hands of players, every time a green ball appears. Whenever there’s an element of choice, then you can try out different playing strategies.

The most basic way to play Cash Or Crash is to immediately cash out as soon as a green ball appears. The first rung of the prize ladder is 1.2x, so you’ll make a small profit. But with just 8 balls among the 28 in the machine, you’re likely to see lots of consistent wins.

If you immediately hit Take All every time you play, it won’t be too exciting and you’ll never land the biggest payouts. But if you’re happy to grind, this might be the strategy for you.

This Cash Or Crash strategy seems to offer a much better balance between potential rewards and entertainment. If you can clear the first couple of rungs on the payout ladder, you’ll get your stake back. But importantly, unlike when you immediately Take All, you’re still in the game and have a chance to continue progressing.

The only way to land the biggest possible jackpot is to ensure that you’re in the game all the way to the end. The chances of actually making it right up to the 20th step are incredibly slim, more than one in three million rounds. But if you don’t buy the ticket, you can’t win the lottery!

The idea would be to start with a small playing bankroll that you are happy to risk losing entirely. Then you would simply continue every time a green ball appears and hope to make it all the way. This is essentially a suicide mission, so make sure that you are playing for fun with small sums that you afford to gamble. Be responsible.

Where to Play Cash Or Crash

This popular live game show is available at all of the top online casinos named on this page. We only recommend safe, secure and properly licensed sites that offer the best casino games, such as Cash Or Crash.

Further, we test their customer service team, assess the available payment methods and scour the internet for the best bonuses. So you can be assured of the best possible live casino gaming experience.

Hop aboard the Evolution Gaming blimp and join the charismatic presenters for the journey of a lifetime. Soar high above the city courtesy of the green balls contained within the drawing machine. Keep your fingers crossed for the appearance of the Gold Ball bonus, which could supply a first class ticket to a 50,000x payout!

How do you play Cash Or Crash?

This live casino game show is among the easiest to understand. We’ve explained the rules and gameplay elements in full elsewhere on this page.

Who makes Cash Or Crash?

Cash Or Crash is one of the many engaging live dealer game shows produced by multiple award-winning suppliers Evolution Gaming.

Is there a winning strategy for Cash Or Crash?

As the game is completely random, it’s impossible to devise a guaranteed way of winning at Cash Or Crash. However, there are certainly some playing strategies that you can try, as discussed earlier in this guide.

What is the Cash Or Crash RTP?

The Return To Player percentage of Cash Or Crash is set at 99.59% according to the game’s developer Evolution Gaming.

Which online casinos have Cash Or Crash?