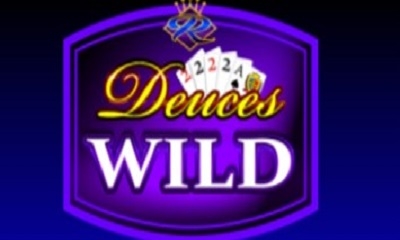 Deuces Wild is one of the two most popular video poker styles out there. However, it also has one of the highest levels of volatility as well. Here we break down this iconic game and show you everything you need to know to get started.

The online scene for video poker is pretty expansive. With that said, Deuces Wild video poker remains one of the most popular games. There are a lot of reasons for this, but they can mostly be summed up in one sentence:

A very large portion of the cards are wild, which makes this a fun game to play.

Getting wild cards is exciting because it adds to the flexibility of your hands. It’s easier to hit better made hands on average, and it adds a lot more strategic depth. With that said, along with this comes a higher level of volatility. The swings can be severe for a non-progressive title, though a progressive version of this title does exist.

The bottom line is that if you like action or a lot of strategy, or both, you’ll find them here. This is one of the best games out there for people who like either of these in any genre.

There are a few key things to look for in online casinos for this game specifically. We’re going to offer a quick checklist to check for:

If you get these three things where you want them, then you’ll have a much better experience.

There are a few things to know about this game before you start looking at how it operates. The idea is that there is a 52-card standard French deck used. This is the deck commonly used in so many other card games. You’ll be playing a version of five-card draw against the house.

What you’re trying to do is make poker hands with your draw. Essentially, you’re given five cards, but you get to discard some to receive new cards to help your cause. Your end result is compared to a pay table of poker hands according to hand ranking. The better the hand you get, the better your payout.

However, there’s a twist put on this whole arrangement. All cards of a rank of two (aka: “deuces”) are full wild cards. That means that they will substitute for the cards that give you the best possible hand. Unlike some other games that require the wild be used for a flush or straight or otherwise count as an ace, there are no such restrictions on the wild cards for Deuces Wild.

The procedure for playing this game is straightforward and easy to learn. That makes it really easy for new players to hop right in without much in terms of special knowledge. Aside from knowing the hand rankings (see below), new players can see what’s going on quickly.

The process for playing a hand of this game is fairly quick once you get the hang of it. Experienced players get in several hands per minute on average, for example.

The hand rankings for Deuces Wild are based on the traditional five-card poker hands. However, they’re not exactly the same. Here we’ll quickly break down the poker hand rankings for this particular game. We’ll also include one of the most popular pay tables found online. With that said, we’ll get more into pay table versions further below.

Players who are familiar with poker hand rankings will notice something. Two pair and one pair hands are not listed on this pay table. That is because they do not pay out in Deuces Wild video poker.

A big reason for this is the fact that you have four wild cards in the deck at all times. That makes it much easier to make better hands than usual. As a result, the payouts have to be adjusted upwards to compensate.

The pay table that we listed above is found with a number of software providers online. Most online pay tables will be similar but perhaps with some small deviations. The above pays out 98.94 percent with correct play, and you typically won’t find Deuces Wild games that pay much more than 99 percent online.

A slightly different pay table that’s also common has a 25x win for a wild royal flush with a 15x win for five of a kind. These are both improvements over the above listing. To compensate, four of a kind is worth 4x instead of 5x. The remaining payouts are 4x for quads and a full house, 3x for a flush, 2x for a straight and 1x for trips. The resulting payout is 98.91 percent with correct play. That’s obviously very close to the above.

We strongly suggest looking up the maximum payout value for a given pay table before enjoying this game. The reason for that is that different software providers and casinos use different tables. For Deuces Wild, you want to avoid any game that pays out less than 98 percent.

How to Win at Deuces Wild Video Poker

Strategy for Deuces Wild is pretty complicated. As far as common video poker games go, it may have the most complicated strategies of them all. This is because you have to treat each number of wilds as its own class of hands. For example, you have to learn to play zero-wild hands, one-wild hands and so on in different ways.

With that said, we have two important resources for players who want to get better at this title:

In any event, recreational players can have a lot of fun with this game as well. It’s not something that you’re obligated to take super seriously by any means in terms of detailed math and strategy.

Deuces Wild video poker is one of the most iconic casino games of all time. It’s also one of the most in-depth titles from a strategic standpoint. Because of this, it’s really easy to see how it’s maintained a strong fan base for such a long time. If you’re the type of player who likes taking on a game with a lot of skill involved, this is a great pick.