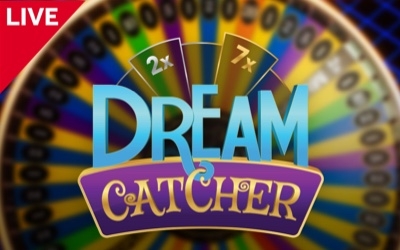 Dream Catcher Live from Evolution Gaming is an online casino version of the classic and very popular money wheel games found in brick-and-mortar casinos. Released in 2017, the studio’s original version of the “Money Wheel” game remains as popular now as ever before in online casinos across the globe. We aim to uncover the secrets of Dream Catcher’s success and provide everything players need to know before spinning the wheel. Check out our recommended Dream Catcher casinos below for the best places to join in the action.

When live casino games first appeared, the emphasis was placed on traditional card and table classics, such as roulette, blackjack and poker. This focus prevented slot and bingo enthusiasts from taking advantage of the new and exhilarating phenomenon of live gambling from the comfort of home. Live market leaders, Evolution, decided to respond by introducing a game that would potentially appeal to all online players.

The Money Wheel has existed as a staple of land-based casinos for decades. The developers took this popular concept on board and added an extra twist, which improved the RTP rating and overall level of excitement. The result was an effortlessly simple game that combined all the enjoyment of live casino play with the opportunity for huge jackpots in a lively gameshow environment.

Perhaps the main reason why Dream Catcher proved such a hit across the industry, was indeed its straightforward approach. Punters completely new to the gambling scene could jump in and get started straightaway, without having to unravel complex rules and gameplay. The adventure begins in Evolution’s flamboyant studios in Riga, which broadcast streams in HD quality using multiple camera angles to enhance that immersive experience. The number of players allowed is unlimited and punters are greeted by a welcoming host with a professional, showbiz flair. Bettors can interact with the host and one another, as they place their wagers and watch the action unfold.

In keeping with modern demands, Dream Catcher is available to play across all devices. All that is required is a stable internet connection and a membership with an online casino, as the game cannot be trialled for free due to its live format. Whether on desktop, mobile or tablet, players can access the studio and make full use of its features, wherever they are and whenever they like.

The aim of the game is to predict where the pointer at the top of the wheel will land. Players simply select their chip value and click on the number they wish to bet on. Punters can choose as many numbers as are available, from just one to all six outcomes. Everything is made easy with the no-fuss betting platform on the lower half of the screen, which also features a display of the most recent winning numbers.

Besides its simplicity, another great benefit that has endeared the game to the masses is its wide betting range, with wagers as low as €0.10 ensuring those on a budget don’t have to miss out on the fun. And such low bets can result in surprisingly big wins, especially when the whopping 7 x multiplier comes into play.

This is where Dream Catcher really pulls in the crowds. Once the pin settles on that tantalising multiplier, the presenter spins the wheel again to reveal the number the bonus will apply to. Theoretically, albeit unlikely, consecutive multipliers can hit, naturally sending winnings into jaw-dropping sums. Hence, Evolution has capped the maximum jackpot at €500,000.

While similar game Monopoly Live has wowed players with its impressive bonus round, Dream Catcher Live strips back proceedings to pure and simple casino entertainment. The ease of play, ample betting range, exciting multipliers, enthusiastic hosts and substantial jackpot potential have cemented the game’s status as one of the most played live titles in existence.

Bagging Digital Product of the Year at 2017’s prestigious Global Gaming Awards, Dream Catcher’s crossover appeal is well documented, with the game showing no sign of slowing down as fans continue to return time and again to this fun-filled classic.