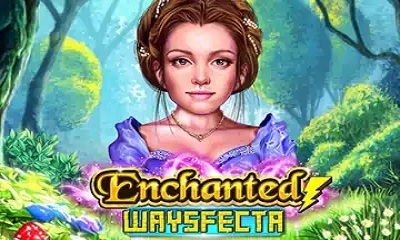 Lightning Box Games’ Enchanted Waysfecta online slot brings players into a magical fantasy forest. You’ll see lots of magical characters and animals in this game. You’ll also have up to thousands of ways to get paid on top of generous bonus features.

An Introduction to Enchanted Waysfecta

Something we really like to see is when a software developer takes a theme really seriously. That’s something we found to be the case with the Enchanted Waysfecta video slot. Players are transported to a magical forest fantasy world when they play this title.

The graphics are absolutely outstanding in this game. However, the gameplay is strong as well.

From a visual standpoint, the background is a good place to start. You find yourself in a fantasy woods with magical mushrooms growing all around. From there, the reels are adorned with gorgeous symbols where a lot of attention has been given to detail. Every single symbol looks great, and that includes the low-tier card rank symbols as well.

The gameplay of this title was made to include a lot of action without things being too hectic. However, you’ll definitely have your fill if you’re looking for lots of ways to get paid. That’s built right into the game’s format. With that said, it’s pretty easy to get started without having to learn anything new, so it’s friendly to all types of players at the same time.

The layout for this game uses Lightning Box Games’ Waysfecta approach. This is very similar to the common “all ways” format with some small tweaks. We’ll break down what you need to know in the following:

Along with how easy the betting is set up, you’ll also have easy to understand payouts. They are all a multiple of the amount you’ve wagered in total. That means something like a 20x win with a €3 wager will pay €60 total. You don’t have to worry about line bet wagers or anything else along those lines.

With the Enchanted Waysfecta online slot, you’ll have a great time with the gameplay. That’s because they’re all about giving you a lot of ways to win within a relaxing environment. From the basic format to the feature set, everything is geared around giving players the most fun. We’ll break down the features and what you need to know about the Waysfecta layout option so that you can hop in and get started without any questions about what to expect.

The girl symbol in this game is the wild. She appears in a blue dress with brown hair on a purple background. She’s very important in this title because she interacts with the Waysfecta format really well. However, that’s something that we’ll get into a bit more down below.

This wild girl symbol shows up on the last four reels. That means she only appears on the second, third, fourth and fifth reels only. As a result, she doesn’t give you winning combinations that only consist of wilds. That’s not such a big deal here, however, since she helps you to get so many other wins.

As is standard in video slots, she also does not substitute for the scatter symbol. However, she substitutes for everything else in the entire game.

The enormous golden egg symbol is the scatter in this title. You’ll have opportunities for some of the biggest wins in the game with this scatter. What’s great is that they pay out no matter where they appear on the game board.

Here are the wins you can get with this scatter:

The Waysfecta mechanic does not apply to these scatters. Instead, you’ll only pick up one of them on each reel no matter which reel they fall on. It’s worth noting again that the wilds do not substitute for the scatters in the Enchanted Waysfecta video slot.

When you’re able to get at least three scatters on the grid of symbols, you’ll be given free spins. Players are always granted 8 free spins no matter how many scatters were used. During the free spins, scatters do not appear, so they cannot re-trigger the feature.

However, there are a couple of things that make this bonus round stand out compared to the regular game mode. First, you’ll be given one additional free spin for each winning spin you get. Any free spin with at least one payout qualifies. Second, the multiplier for all of your wins also increases when this happens. That is, you start with a multiplier of 1x at the normal level. Each spin with at least one payout increases your multiplier by a factor of one.

No limit is placed on how large of a multiplier you can get. That makes this feature stand out even further by giving you something pretty crazy that can give you some massive payouts.

As you can see from the name of the game, this title uses the Waysfecta mechanic from Lightning Box Games. What this does is it allows randomly non-scatters that appear on the middle three reels to count four times instead of one.

In terms of the effects they have on the payouts of the Enchanted Waysfecta online slot, it sort of acts like a 4x multiplier. In any event, it gives you better payouts than you’d get otherwise. This is also available in the free spins, so it stacks with the multipliers that you can get there too.

How to Win at Enchanted Waysfecta

The volatility of this title is in the medium range. This comes from the somewhat balanced pay table combined with the reasonable but not super high hit-rate. The features pack a lot of chances for major wins with the multipliers and Waysfecta mechanic as well.

Overall, the best strategy for a game with this level of volatility is to pick a wager around the middle of the range you’re comfortable with for online slots. That will put you in a position to have a balance between the prizes you can win and the swings.

Three characters make up the top tier of payouts. The red queen is worth 100x for five, and she’ll pay 5x for just two of a kind as well. From there, the man in green gets you 25x for five, and you’ll score 15x for five of the man in blue.

Two animals comprise the mid-level prizes. They are an owl with a book and a mouse with a key. Each of them are worth 10x when you get five of a kind combinations.

Finally, we have the card-rank symbols at the lower tier. The purple A or red K symbol will get you 5x for five of a kind. Five of the yellow Q, blue J or orange 10 is worth 3x as well.

Because this game offers a tremendous degree of quality while still standing out as an individual game, this online slot fits perfectly in this software company’s portfolio overall. On top of that, the fun is only enhanced by the awesome degree to which the level of graphics is suited for the game’s concept.

The feature-based gameplay of this game is centered around bringing slot fans a whole lot of action, and the pay rate of the bonus features in this game is substantial enough that players will definitely not get bored of it. On top of that, if you’ve enjoyed playing other slots that focus on this style of driving concept, then this is one game you won’t want to miss playing.

Which online casinos have Enchanted Waysfecta?