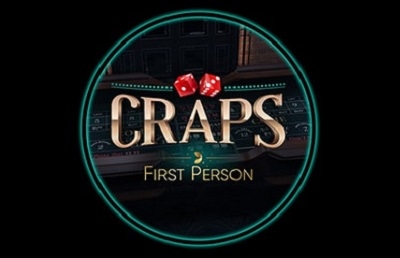 Evolution Gaming’s First Person Craps game brings the most popular casino dice game to life. This title comes to you here in a way that cannot be matched by the competition. You’ll have access to a full selection of craps wagers with no major limitations on the bets that are available in this game.

An Introduction to First Person Craps

The game of Craps has been around in one version or another for a very long time. However, it’s never really fit into the online space just right because of the format that has been used for it. Evolution Gaming has challenged that, as they often do with that sort of thing. The end result is First Person Craps, a game that brings the action to you in a way that has never been done before.

The presentation of the action is different here, and the gameplay has been made smoother. However, it’s still the same basic game with no major switch-ups, which is good for players who enjoy Craps.

If you’re a long-time fan of the game, then this can very easily become your favorite version of it ever. However, if you’re a new player who hasn’t really ever gotten into it, then you’re in for a treat as well. This is easily the best version of the game to learn on because the presentation is so crisp and easy to use.

Getting Started With First Person Craps: Gameplay and Rules

Here we’ll break down how the gameplay goes in terms of the rules of the game. We’ll also look at practical considerations like how much time you have, how to switch to another version, etc. It doesn’t matter if you’re an established veteran or if you’re completely new to the game. If you read through the following, you can be up and running in just a few minutes.

A Note on the Perceived Difficulty

We know that Craps has a reputation for being a difficult game to learn. We think that is a massive misconception. Along these lines, we will be showing you how to play this game from a more simplistic perspective. This isn’t to handle you with “kid gloves.” Instead, it’s to show the basics of the game first before throwing advanced wagers and ideas at you.

The essence of First Person Craps centers around the pass line bet. This is the most fundamental wager in the game, and most players will make it. It’s not required, but it’s often considered the main fundamental bet in the entire game.

In brick and mortar games, a person called a shooter would be the one rolling the dice. Instead of this, you’ll have a mechanical device rolling the dice in all of Evolution Gaming’s versions of the game. This keeps things fair and appropriately random with no dealer bias or that sort of thing.

Here is how the pass line bet works:

With that said, there are further complications.

During the second stage of the pass line bet, another set of wagers becomes available. This allows you to place more bets on the point being rolled before a seven, and it’s called playing the odds.

What’s amazing about playing the odds is that these wagers actually have a house advantage of exactly zero percent.

This is intentional, and it effectively brings down the house edge of the entire pass line bet as a whole. This gives the following payouts on different point values for playing the odds:

The First Person Craps online game from Evolution Gaming gives players these exact betting options with these payouts. If you play the pass line bet, which you should if you’re starting out, then you should play the odds. This drives the house edge down quite a bit overall, which is already low at well under 2 percent. This is without playing the odds to put that in perspective.

Other Aspects of Gameplay Procedure

The pass line bet has you start your bet on the come out roll, but other bets do not. We’ll look at some of those below, but first, consider the following options. These are other aspects of the procedure that we want to point out for the sake of clarity.

First off, this is not a live dealer game. Instead, it’s a game with extremely good graphics and video effects that are set up to emulate the look and feel of one. With that said, you will always have a simple button available to click over to their live dealer tables instead.

And that brings us to the main difference between the two types of games. With the live First Person Craps games, you can play at your own pace without having to worry about holding up other players. In their live dealer version, however, you get 17 seconds between most rolls to place your bets. This keeps the game moving at a reasonable pace without it being too quick or too slow.

We want to give players a taste of the other wagers available in this game without going into too much depth into the details that most people won’t care so much about. Along these lines, take a look at the following additional bets and what they’re about.

The above list will give you a little bit of a taste of the different types of wagers available in the game. While there is a lot more depth than this, most players only play with the pass line or the above. This is because many of the other available wagers are trap bets with very high house edges.

How to Win at First Person Craps

The idea behind strategy in craps in general applies here. Nothing in particular needs to be changed for the first person version of this title by Evolution Gaming.

The most basic strategy used for new players is as follows:

That strategy will give you a payout rate that’s in the range of 99 percent. However, we also have a breakdown of Advanced Craps Strategies for players who want to get into other types of bets without falling prey to some of the available traps.

The First Person Craps tables from Evolution Gaming bring players into a completely different presentation than what most people are used to. However, the fundamentals of the game remain the same. Moreover, you can play the game at your own pace without having to be rushed along.

At any time, if you want to switch over to the live dealer environment, it’s there at a push of a button. With that said, for players who prefer to avoid the social static of the chat box and the noise of the dealer, this is a superior option.