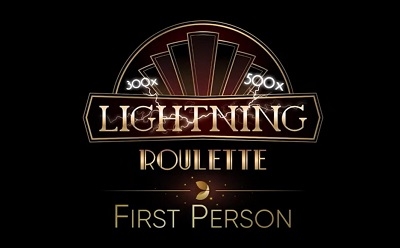 The First Person Lightning Roulette tables from Evolution Gaming offer another way to play one of the most exciting forms of roulette online. This game allows players to go at the game at their own pace instead of having to wait on other players while also offering big multiplier wins on special payouts.

There is no shortage of opportunities to play roulette online. However, and much to the dismay of fans of the genre, the vast majority of what’s available is more or less exactly the same with a different presentation. This is where Evolution Gaming stepped in to offer something that’s truly different with their First Person Lightning Roulette game.

This is more than a plain, first-person version of a roulette title. Instead, the gameplay is set up so that there are special payouts and extra ways to win worth up to 500x.

With that said, and this is critical for players who don’t like when things get too far outside of the box, the majority of the game is well within the bounds of what players are used to. They didn’t completely reinvent the wheel here, so to speak, which would actually alienate roulette fans. Instead, they’ve come up with something that’s completely fresh and new.

A Note on Presentation

It’s worth noting that they do have a live dealer version of this exact same game, and while the play speed is a little slower since you’ll have to wait on other players to some degree, the fact of the matter is that it’s essentially the same game with a different presentation between the live dealer version and the 3-D modeled version.

With that said, the first person option, with its 3-D modeled rendering, looks and presents like a live dealer game even though it’s not live video footage with a human dealer. Some players prefer this over the chat chatter and everything else, and some will prefer to talk with other players and that sort of thing.

It’s completely up to you, but know that the experience is a bit different even if the rules of the game are more or less the same.

With First Person Lightning Roulette, you’ll have a style of play that’s pretty similar to other games in the genre even though the payouts and how they are determined can vary a bit. The extra elements of the game are what most people will need to know about, but because they fit inside of the overall gameplay, they can’t be divorced from the rest of the game.

Here’s how the flow of the title typically goes:

Once you see the game play through a few wagers, even if you’ve never played any variation of roulette at all, you’ll be ready to jump right in and play because it’s super easy to learn. In what follows, we’ll get into the nuances of the payouts and how you can win up to 500x on a single bet, the largest non-progressive roulette win available online.

The “lucky numbers” and their respective payouts shown behind the game board are the key thing that sets this game apart from others aside from how great the game looks for not being a live dealer game.

There’s a wager in roulette called a “straight up” or “single number” bet, and as the name implies, it’s a bet on a single number. In most forms of roulette, the payout for this type of bet is 35x the size of your wager. However, it’s dropped down to 30x in this game as a baseline, and here’s why.

If you hit a win on a straight up or single number bet, and that number is one of the chosen “lucky numbers,” then instead of winning at 30x, you’ll win at the rate of the multiplier given.

For example, suppose you place a wager of €10 on the single number of 22. It comes up as a lucky number with a multiplier of 388x. Instead of getting a 30x win, which would result in a profit of €300, you’ll be given a 388x win. This means your profit would shoot up to an incredible €3,880 for the win. This is the key dynamic that makes this title stand out, and it’s the reason why it’s the most exciting form of roulette in the industry today.

It’s important to note that this only happens with the straight-up wagers. None of the other available bets are affected by these changes with the payouts, multipliers, “lucky numbers” and so on.

The inside wagers in roulette games are the bets that happen on the actual grid of numbers. On your display with First Person Lightning Roulette, those numbers will be up above the other grid of bets that says things like even, odd and so on.

There are a number of different inside wagers you can make that offer different levels of payouts, and most players like to mix them in with each other to create a few different ways to win on each spin. Here is a quick look at some of the most popular of these inside bets:

Other inside wagers are available based on similar ideas, but these are the most popular four of the bunch and cover the majority of what any players will want to know.

The outside wagers in the First Person Lightning Roulette table games will have a handful of different spots listed below and to the right of the number grid that offer some simplistic types of wagers. Here is a quick overview of what these look like.

These bets pay out at 1:1 as follows:

And these bets pay out at 2:1 instead:

It’s generally best for new players to start off with the outside wagers because they’re easier to follow with a low volatility. However, if you really want to experience everything that First Person Lightning Roulette has to offer, then you should move toward the straight up wagers, even if that means using a much smaller bet size than you would otherwise.

How to Win at First Person Lightning Roulette

The first thing you need to know is that every single wager available in this game has the exact same payout rate except for the straight up or single number bets. They all have a house edge of 2.7 percent, which is up there with the best paying table games that you can find anywhere. It doesn’t matter if it’s an inside bet like a corner wager or an outside bet like a bet on even or odd, they all have the same 2.7 percent house advantage.

That leaves the straight up bets. They have a slightly worse payout rate with a house edge of 2.9 percent, but that’s hardly anything compared to the chances to win jackpot-level pays as high as 500x. This wager obviously has a higher volatility than anything else that the game has to offer, but that’s alright since the risk and reward increase proportionately.

Roulette fans don’t always have the best game selection to pick from depending on which variations they’re aware of, especially if they don’t want to deal with the disadvantages of a live dealer game. These disadvantages include things like listening to game chatter, dealing with the chat box and having to wait around and play at the pace of other people.

With that said, Evolution Gaming’s First Person Lightning Roulette tables do not have any of these disadvantages, and you can play at your own pace while experiencing something truly different within the genre, which isn’t something that you get a lot of chances to do because of the nature of the game.