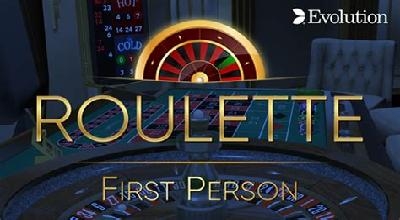 The First Person Roulette game by Evolution Gaming takes players into a virtual scenario of playing single-zero roulette in person. This is a straightforward way to play the game as if you were actually playing in a casino using gorgeous graphics and a table layout that’s exceptional on all fronts.

An Introduction to First Person Roulette

In the online casino industry, there are people who really prefer table games, but they often have a problem that doesn’t easily get solved: They want the same feel of placing the bets at the table like they would handling chips and counting out their bets.

Choosing a number for your bet and waiting on the result isn’t the same as playing in a live casino, and for many, that ruins the experience.

While there is nothing that will exactly replicate the feeling of playing in a brick-and-mortar establishment, the First Person Roulette game from Evolution Gaming is about the closest you can get. It offers graphics so good that it almost looks like the real thing (and will easily be mistaken for the real thing in certain parts of the game), and you get to handle things as if you were in a live scenario.

In short, it offers the best of the online and land-based environments without the major disadvantages of either. As a result, it’s the players who really win.

If you’re new to roulette in general, or if you’d just like to know how things work in Evolution Gaming’s first person rendition of this classic, then we’ll break down everything that you need to know in what follows.

Here’s how the game proceeds through a single round of play:

While this is a pretty straightforward procedure for the gameplay, there are some complications on the rules and how you can get a variety of different payouts with differing levels of risk and reward. We’ll break down all of that down below into two sections based on simple wagers and advanced wagers.

With all of the different types of bets available in First Person Roulette, there are some that are pretty simple to make, and that’s a good place to start for players who may not be ready to jump into the deep end, so to speak.

On the main table layout, you’ll see a rectangular grid of numbers 1-36 with 0 on the far end. This is what’s known as the grid. One of the most simple wagers you can make is to place your chips on the center of any of these numbers (including the green zero) to make a wager on the individual number.

Known as a straight-up bet or a single number wager, the payout on hitting a winning number with this option is 35x. It has the highest risk and highest reward of any wager in the game, and it’s known for being the most basic betting unit as well.

Below the grid, however, there are a number of other spots for wagers that don’t have as much risk or reward. You can bet that the number will turn up red or black, for instance, and half of the non-zero numbers are red while the others are black. You can also wager on whether your number will be even or odd, though bets on an even number do not win if the ball lands on the green zero.

All of the even, odd, red, black, 1-18 and 19-36 wagers pay out at even money, so if you wager €5 and win, then you profit €5 on your bet, so these are really popular and common wagers that are simple enough to place and understand.

Astute players will notice that the straight-up bets in First Person Roulette games have a fairly high volatility and payout while the even money and 2:1 wagers have volatility levels and payouts that are pretty low. While these are the easiest bets to learn to make, they also leave out all of the other available wagers with different volatility levels.

We strongly suggest learning the basic bets and enjoying a few sessions sticking to those before hopping into the more advanced wagers because it’ll help you to learn about how the game and betting work in general.

Once you’re ready to move on to the advanced wagers, you’ll start to make other types of bets on the grid based on the location where you place your chips. There are four main types of advanced bets that can be made along these lines, and we’ll lay out what they are, how to make them and what the payouts are like here.

Split Wager – A split wager is a bet on two numbers that are adjacent to each other horizontally or vertically on the grid. You make that bet by putting your chips in the middle of the line that separates the two numbers. The payout for this bet is 17x, which is more toward the middle of the extremes noted above.

Row Wager – There are rows of three numbers that make the grid, and a row wager is a bet on the three numbers in one of those rows. To make this bet, place your chips in the center of the line at the top of the row. You’ll win on any of the three numbers for that row, and your payout will be worth 11x.

Corner Wager – You can place a bet on four numbers that all touch at the same corner (and that make a square on the game board). For example, you could place a bet on 1-2-4-5. You do this by putting your chips on the corner where all four of those numbers touch. The payout is a solid 8x, which is low enough that the volatility isn’t super high while being high enough to remain interesting.

Double Row Wager – This is much like the row wager except you’re betting on two adjacent rows. This is a bet on six numbers in total, and you place the bet by putting your chips at the top corner on the grid where two rows meet. There’s a payout of 5x for this bet.

As you can see, learning the chip placement is a bit tricky when you’re first starting out, but it’s nothing that’s so complicated that you can’t learn it with a little bit of practice.

With First Person Roulette, you get to see the game unfold right in front of your eyes as if you were actually at the table. Evolution Gaming has created this game for players who want the best of the online and land-based experiences, and that’s exactly what it brings to the table. It’s a very solid presentation of one of the most popular table games of all time, and it’s something that roulette fans should definitely check out.