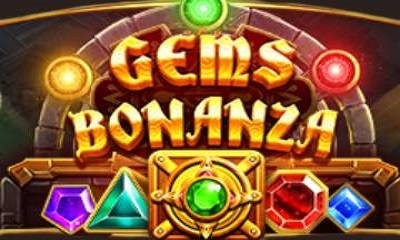 If action is what you’re looking for, then the Gems Bonanza online slot from Pragmatic Play has what you need. This is a gem-based, cluster-matching game with several features and a large play area. You can win big multipliers, pick up colossal symbols and much more in this slot.

An Introduction to Gems Bonanza

No shortage of gem-based games are found in the online slots industry. However, Pragmatic Play knows how to make a title stand out from other similar games. They put that expertise to work with their Gems Bonanza video slot.

As a result, you get one of the most action-oriented, cluster-based games that you can find online.

We really like titles that bring a lot of features and ways to win with a high hit-rate. They tend to get high ratings from us because they give most players something they can enjoy almost always. In any event, that’s exactly what you’re getting here with a high frequency of wins and plenty of ways to win several times on the same turn.

From a visual standpoint, this game is pretty straightforward. It has an ancient sort of stone-based look to it like something from an Aztec pyramid, which is pretty common for this sub-genre. The gems all look tremendous, however. Additionally, the background is animated and has a higher level of quality than what you typically see.

Everything about this game comes back to the format in one way or another. It’s a cluster-based game with wins that do not follow the typical payline structure. However, it’s pretty easy to get used to once you play a few spins. Here’s what to expect:

With such a flexible betting setup, it makes it easy for players to pick out a bet size that works for them. Additionally, the volatility of this game is in the medium-low range despite the features that give some pretty big wins. A big part of this is the reasonably high hit-rate and the ability to pile up small and medium wins on the same spin.

The feature set of the Gems Bonanza online slot is all about action and getting more wins. We really like how they went about this because it makes this title a bit different than other gem-matching slots. Here we’ll break down each of the key features and what you need to know about them.

It’s difficult for wild symbols to have their own payouts in a game like this. Along those lines, it’s not surprising that they do not. However, they can help you to get clusters you would have missed out on.

What’s pretty interesting is that they can actually help you to get multiple clusters at once. This is especially pronounced if you have multiple wilds land near each other. In any event, they increase the hit-rate and give you more opportunities to get into the other features like the avalanche feature.

The key feature that the Gems Bonanza video slot centers around is the tumble feature. This works much like what you see in plenty of other slots. The idea is that winning symbols pay out before disappearing to allow new symbols to fall in. This can happen over and over in what basically amounts to opportunities for free re-spins after wins.

What’s so cool about the tumble feature here is that they can be used to make it easier to trigger the other spin features that we’re going to look at in the following.

On any given spin, you can trigger one or more of five different spin features. The way this works is that colored orbs can appear on the game board behind random symbols. If you get a winning cluster over the top of one of those orbs, then it will trigger the corresponding feature for the upcoming tumbles for that current spin.

The feature that you receive is based on the color of the orb as follows:

Having these features be tied to the tumble feature is pretty cool. It’s definitely something we’ve never seen before.

How to Win at Gems Bonanza

To maximize your winning chances at this game, you need to manage your bet sizing properly. The key is that this game has a medium-low volatility. As a result, the proper adjustment is to increase your bet size slightly. Something in the range of 25 to 50 percent of an increase from your average bet size is about right.

The idea here is twofold. First, you get bigger wins than you would otherwise because of the scaling of the payouts. Second, you’ll still have pretty reasonable swings with a lot of smoothness just due to the volatility being so relatively low.

Everything is focused on excitement with the Gems Bonanza online slot, and that is great news for those who need an action-packed gameplay experience. When compared to other video slots with related concepts, this title differentiates itself in a handful ways as opposed to only being like other titles in the sub-genre, and this online slot is an excellent component of this developer’s whole portfolio because of its presentation and style of play.

We really love how the visual appeal gives players an overwhelmingly immersive style of gameplay as opposed to only being an unimportant part of the slot. Along with that, the pay rate of the range of features in this title is serious enough that players will be sure to not get tired of playing.